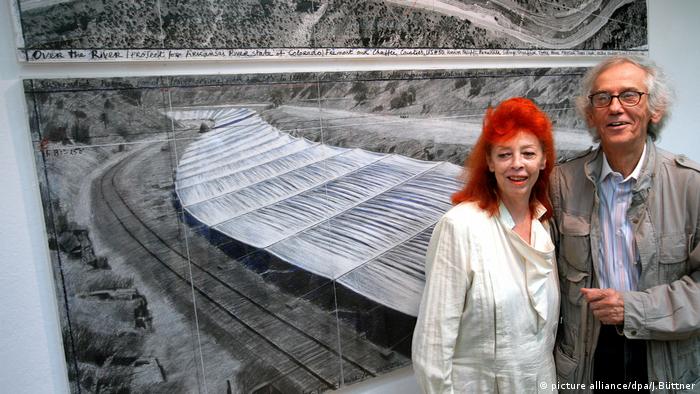 The Bulgarian-born artist and his colleagues are likely to be thrilled that, despite the COVID-19 pandemic, the planned exhibition will now take place in Berlin after all. This comes just a good month before Christo is to celebrate his 85th birthday on June 13.

The show "Christo and Jeanne-Claude - Projects 1963-2020 / Ingrid & Jochheim Collection" opens at the PalaisPopulaire, an art institution of the Deutsche Bank, on May 6. The exhibition is getting a boost from the German government's decision to allow museums to reopen after weeks of closure due to the coronavirus crisis.

In Berlin, works from the Jochheim Collection by Christo and his wife Jeanne-Claude, who died in 2009, are now being shown. They trace the history of major projects in many countries around the world. Understandably, however, the focus in Berlin is on the veiling of the Reichstag. For a period of two weeks 25 years ago, the government building in the German capital was transformed into an art project. In addition, the Berlin exhibition will also show a large number of former art objects by the artist couple.

Christo lived in Paris for seven years, from 1958 to 1964, during which time he had begun to disguise everyday objects. This later became his — and Jeanne-Claude's — artistic trademark. Now, an exhibition there is not expected to start before September, as a result of the current pandemic.

Christos' plan to cover the Parisian landmark Arc de Triomphe has also been postponed, not due to the pandemic, but to the fire at Notre Dame Cathedral one year ago. In order to protect the trumpet falcons, which formerly nested in the cathedral, but have since moved to the Arc, the wrapping has been postponed until September 2021. 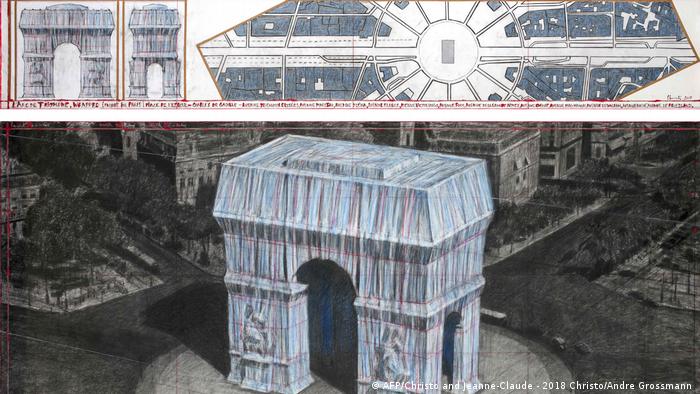 Christo has dreamed of covering the Arc de Triomphe since the 1960s.

Christo arrived in the French capital in 1958. With the Cold War in full swing, he had fled his home country Bulgaria via Vienna to Paris. To make ends meet, he first did odd jobs: washing cars and taking on commissions for artworks, still signing them with his birth name "Javacheff."

At one point, Vladimirov Javacheff/Christo painted a portrait of the wife of General Jacques de Guillebon, director of the Parisian elite school École Polytechnique for prospective engineers. Delivering the painting, he met their daughter Jeanne-Claude. An "extravagant redhead, as if wrapped in plastic foil," is how he later described the attractive French woman, born in Casablanca, in French Morocco. They shared the same birthday: June 13, 1935. In 1960, the young artist Christo joined the group "Nouveaux Réalisme" (New Realism), founded by the art historian Pierre Restany and the painter Yves Klein. He'd brought along his passion for large swaths of fabric from Bulgaria: Introduced to textiles at his father's factory, he would sketch drawings of large bales of fabric at an early age.

Shortly after arriving in Paris, Christo began to 'wrap' cans and bottles in resin-soaked canvas, tying them up and treating them with glue, varnish, sand and car paint. The Cologne art collector Dieter Rosenkranz was the first to recognize his talent, buying some of his early works. 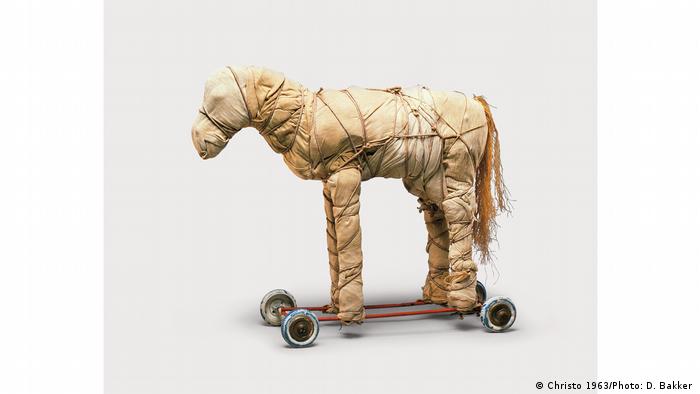 An early work by Christo from 1963

Nevertheless, their work underwent extraordinary development in the Paris years from 1958 to 1963. Their first joint artistic project in 1962 was called "Iron Curtain." The couple also transformed the city and its streets into an exhibition space, blocking the street in Paris' Rue Visconti with an illegally-built pile of oil barrels. It was an installation with a political message, intended as a social commentary on the Cold War and the construction of the Berlin Wall. 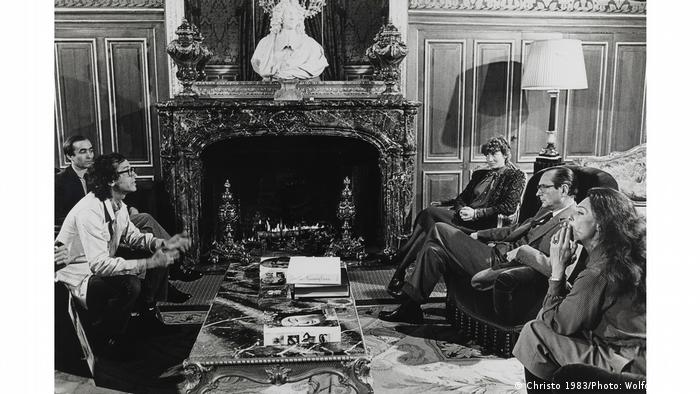 Despite their move to New York in 1963, Christo and Jeanne-Claude remained closely connected to Paris. In 1975, they developed the idea of 'wrapping' the most prestigious bridges of France's capital. Ultimately, however, only Paris' Pont Neuf was draped in cloth. It was a project that could only be realized after ten years of passionately persuading politicians and residents.

But Christo and Jeanne-Claude were well-versed in that kind of language, having persuaded authorities to allow them to wrap a coastal strip of Australia in 1969. On October 10, 1971, they hung an orange-colored curtain ("Valley Curtain") in the Rocky Mountains in the US state of Colorado. With the first attempt a failure, they repeated the event a short time later.

Christo and Jeanne-Claude remained a couple in life and art until Jeanne-Claude died on November 18, 2009, age 74. The famous artist couple had worked side by side for 51 years, wrapping Berlin's Reichstag in Berlin in 1995 and trees in New York's Central Park in 'The Gates' in 2005. But their early years together in Paris remain highly symbolic of their entire work. 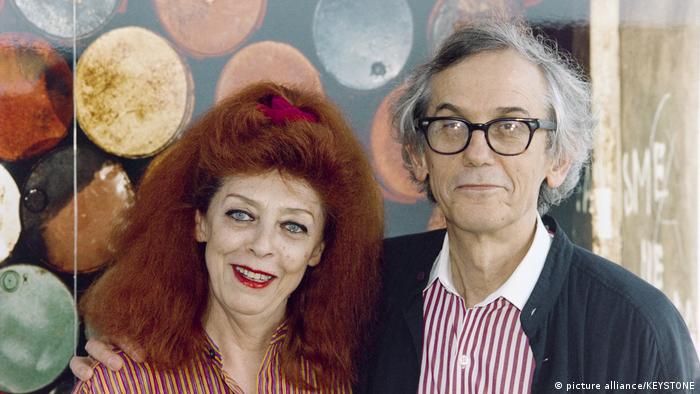 Composed of over 7,000 oil barrels, the sculpture by the revered artist floats on the Serpentine Lake in London's Hyde Park through September 23. It accompanies a retrospective of Christo and Jeanne-Claude's work. (18.06.2018)

How do you learn to wrap an island, a lake or the German Reichstag? At an exhibition in Düsseldorf, artist Christo shows off his early works and talks about his creative beginnings.  (05.12.2016)

After decades of stunning the world with works of art on a monumental scale, the famous husband-wife team has been split by death. (20.11.2009)