A carp jumped onto the lap of a driver in the Czech Republic, causing her to swerve the vehicle and sustain serious injury. The Christmas carp is a Czech tradition. 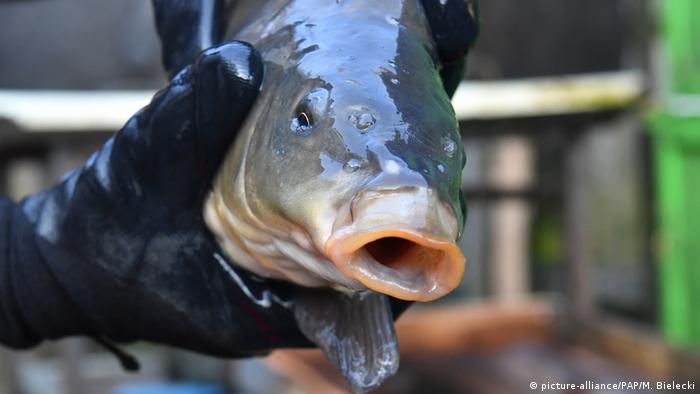 A live Christmas carp caused havoc in the Czech Republic on Monday when it jumped from a plastic bag on the passenger seat of a car straight into the lap of the driver.

The woman was transporting the traditional Christmas delicacy home on Monday ahead of the big day when the fish made a bid for freedom. Surprised, she crashed her car into a concrete column and sustained serious injuries, according to DPA news agency.

A helicopter had to transport her to hospital, where she is being treated.

Police in the village of Horni said the woman was 62 years old and was so "shocked" by the carp landing in her lap, according to Czech media reports.

The tradition of the Christmas carp is widespread in the Czech Republic and other parts of central and eastern Europe including parts of Germany and Austria. The carp is often bought a few days before Christmas and allowed to live in the bathtub in people's homes.

Then the fish is killed, often after being stunned with a mallet or baton, and served up on Christmas Day. Children often grow attached to the "bathtub carps" before they are slaughtered, going so far as to name them.

Sweden: fish in the basement