As feared, cholera has broken out in Mozambique, two weeks after a massive cyclone swamped much of the center of the poor southern African country. Authorities are battling to keep disease from spreading. 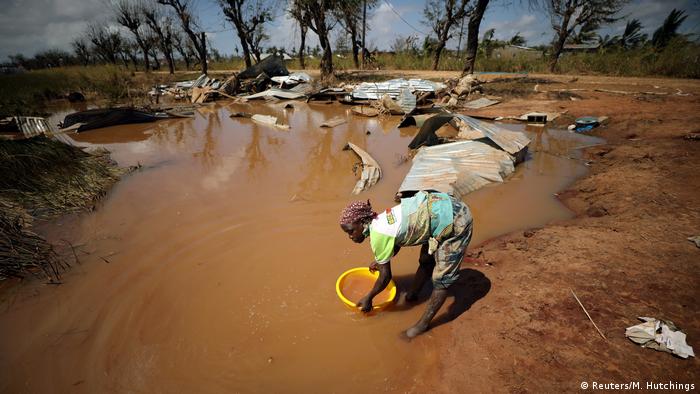 The first confirmed cases of cholera were reported in cyclone-hit Mozambique on Wednesday.

Health authorities and aid agencies had warned of a massive threat of disease in the increasingly squalid conditions following Cyclone Idai.

Five cases of cholera were reported in Munhava, a poor neighborhood in the city of Beira, the national director of medical assistance, Ussene Isse, told reporters.

"We did the lab tests and can confirm that these five people tested positive for cholera," Isse said. "It will spread. When you have one case, you have to expect more cases in the community."

WHO warns of 'second disaster'

Authorities are struggling to provide clean water and sanitation to the city of 500,000 after the March 14 storm. Doctors Without Borders said residents of the city have resorted to drinking stagnant roadside water or water from contaminated wells.

Cholera is a waterborne disease that causes acute diarrhea and can kill in hours if left untreated. It thrives in conditions of poor hygiene and is spread by contaminated food and water.

Hundreds, if not thousands, of people died in the storm and ensuing floods, but the World Health Organization has warned of an impending "second disaster" caused by disease. It said 900,000 doses of oral cholera vaccine would arrive in the next week.

"We were expecting cholera cases and we were prepared for this. We have put all the measures in place to try to mitigate the spread of cholera as much as we can," said Emma Batey, a coordinator at the COSACA emergency aid consortium.

Malaria and typhus both pose a major risk to survivors of the storm, as well as food shortages. Vast swaths of farmland have been swamped.

Every evening, DW's editors send out a selection of the day's hard news and quality feature journalism. You can sign up to receive it here.

After Cyclone Idai, 'Beira has found itself in the dark'

The Mozambique city of Beira has been isolated since the arrival of Cyclone Idai last week. As telecommunications connections are slowly being restored, DW has spoken with the city's mayor, Daviz Simango. (21.03.2019)

Climate risk: Insuring against the inevitable

The world's poor are being encouraged to take out insurance against climate-related disasters. But as the logic of some schemes unravels, those who profited least from fossil fuels are left paying for their damage. (07.12.2018)

The United Nations says at least 97 people have died of cholera in northeastern Nigeria over the past two weeks. As well as the outbreak, the region is grappling with attacks by local militant group Boko Haram. (22.09.2018)