Chinese artist and free speech advocate Ai Weiwei is able to travel again, years after he was jailed and held without charges. The return comes at a time of turmoil in Chinese civil society. 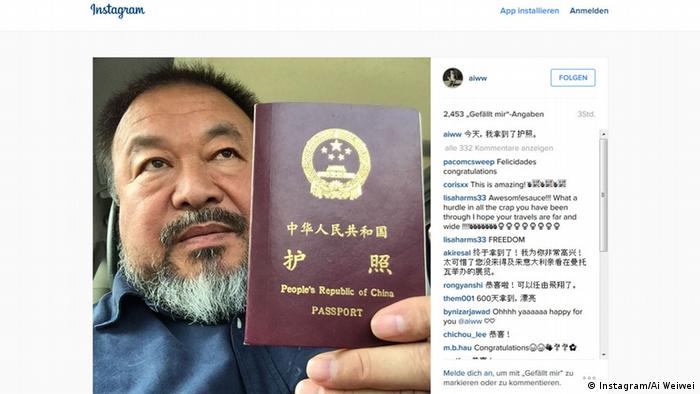 Ai Weiwei, the Chinese artist known for consistently rubbing the Chinese government the wrong way and getting arrested for it, was able to collect his passport on Wednesday more than four years after it was confiscated following the artist's 81-day detention in 2011.

Police from the Exit and Entry Bureau called Ai on Wednesday morning and told him to pick up his passport, Ai told Reuters. The bureau is responsible for issuing passports to Chinese citizens.

"I'm not surprised because in reality, they've said they would return me my passport for many years," Ai said. "They've never said they would never give it to me, except that it has dragged on for four years." Ai said that police did not impose any conditions for his passport's return, describing the exchange as "very relaxed."

Ai said his first international trip would be to visit his son, who has been living in Berlin for 11 months. He said that the government had eased its surveillance of him recently. "Now that they've let me go abroad, I believe they will let me return home," he said.

A question of publicity

Since handing his passport over to the authorities in 2011, Ai has been unable to travel abroad, despite prestigious invitations to teach and appear at exhibits in the West.

Most recently, the London Royal Academy of Art invited Ai to come speak in September - a trip that initially seemed impossible owing to his missing passport. The invitation is for an event one month before Chinese President Xi Jinping scheduled state visit to Britain in October.

Police detained and held Ai without charge, mostly in solitary confinement, in 2011 for almost three months. Authorities later charged him with tax evasion and levied a fine of $2.4 million (2.2 million euros at today's exchange rates) against him. Ai has maintained his innocence, saying that the charges were retaliation for his criticism of the Chinese government and his advocacy of free speech.

Chinese officials have not yet commented on the case. Early in July, the Chinese government launched what Western media has described as the most "comprehensive crackdown" on Chinese civil society in decades. Since then, 238 people have been detained and at least six are missing, including several well known human rights lawyers.

Maas slams 'unacceptable' attack by Erdogan on Macron 28m ago