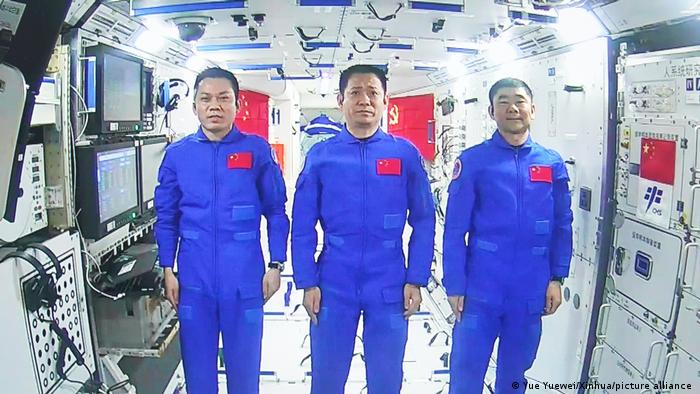 During the space mission, the three men completed tasks including space walks

A small capsule carrying the three men made its landing at 1:34 p.m. (0534 UTC) in the autonomous region of Inner Mongolia in China's north, state broadcaster CCTV showed in a live feed.

The taikonauts — as Chinese astronauts are named — will remain in quarantine for two weeks "because their immune systems may have weakened after the long mission," Huang Weifen, chief designer of China's manned space project told CCTV.

While in space, the three were tasked with transmitting data back to Earth and conducting hours-long spacewalks. Earlier in the week, the crew sent back stunning images of Earth.

The crewed mission, China's first since 2016, is not yet completed. The Tiangong space station is expected to be completed in 2022 and remain in operation for 10 years.

Construction of the space station began in April with the launch of Tianhe, a cylinder-like module slightly bigger than a city bus.

The module will eventually be the living quarters of the completed station.

Four out of the total 11 missions needed to finish building the Chinese station will be crewed. Tiangong, which means "heavenly palace," could become be the only alternative to the 20-year-old International Space Station, which may be retired in 2024.

China's next steps in space

China's next crewed mission is set to last six months.Beijing will prepare for the mission by sending an automated cargo spacecraft to deliver supplies.