Amid concern that the Chinese economy would slip further, second quarter data shows that it may have found its footing. But analysts are plenty worried about the reliance of state intervention to uphold growth. 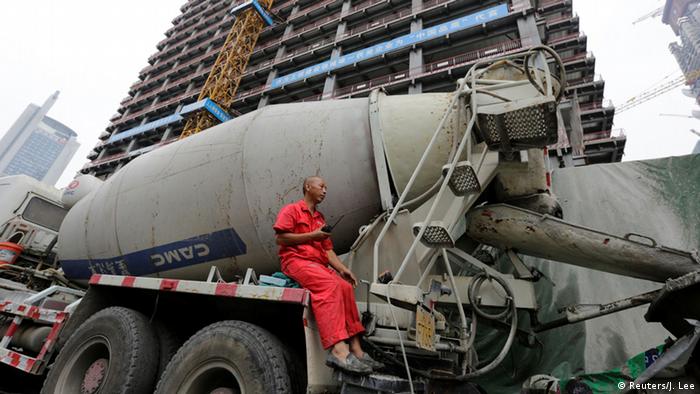 China's economy grew 6.7 percent from April through June, outperforming analysts' expectations and keeping pace with the previous quarter as well as Beijing's growth target for the year of 6.5-7 percent.

"The national economy has achieved moderate but steady and sound development," Sheng Laiyun, a spokesman for China's National Bureau of Statistics said at a press conference Friday.

The data provides some relief for the global economy, which for months has been weighed down by the slowing of the world's second-largest economic powerhouse. China posted its slowest annual growth in a quarter century last year, at 6.9 percent, and discouraging trade data has continued to paint a bleak picture.

But there are doubts that the new numbers necessarily bode well for the future. Sheng added that "we must be aware that the domestic and external conditions are still complicated and severe and the downward economic pressure remains."

Analysts pointed out that growth was sparked by public investment, which Chinese policymakers have sought to wean the economy away from, instead pivoting towards private consumption and investment. Meanwhile, public debt continues to mount.

Beijing resorted to its usual stimulus tools amid worries that the economy was nearly in a freefall. It has held interest rates at record lows and loosened bank restrictions, leading bank lending to jump from around one trillion yuan (134 billion euros, $150 billion) in May to 1.4 trillion yuan in June.

Klaus Baader, Societe Generale's chief economist for the Asia Pacific, said he believes that this "significant reacceleration in credit growth" explains the somewhat encouraging data. But in light of the scale of lending, he said the numbers are "a little bit disappointing."

Private investment grew by less than three percent during the quarter. Tom Rafferty of the Economist Intelligence Unit called this the "greatest concern" facing the Chinese economy, and a sign that Beijing is "failing to deliver on promised market reforms."

There are worries then about what will happen once the state pulls back.

"With stimulus still feeding through, growth is more likely to accelerate than slow in the next few quarters," Daniel Martin and Mark Williams of Capital Economists wrote in a report. "However, as worries about the outlook have diminished, so has the likelihood of further stimulus."

"Any turnaround would therefore be short-lived," they predicted, "and with structural issues still unresolved, a renewed slowdown over the next couples of years is looking increasingly likely."

Chinese imports and exports in dollar terms dropped sharply in June as the country's currency depreciated against the US currency. Falling commodities prices and weakening domestic demand also played a role. (13.07.2016)