The Arctic and its vast energy reserves were a key focus of Chinese Premier Wen Jiabao's recent trip to Europe, fueling concerns about Beijing's preparations for an ice-free Arctic Ocean. 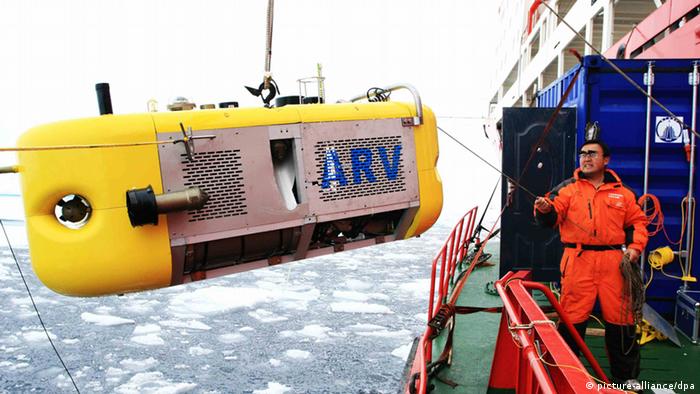 It may seem surprising that Chinese Prime Minister Wen Jiabao, leader of the world's most populous nation, should begin his Europe tour with a stop in Iceland, a remote island with a population of just 320,000. But the move is in line with a wider Chinese strategy to gain a strategic foothold in the Arctic. Global climate change is opening up the once inaccessible region for shipping and industrial development.

A 2011 report by the Arctic Monitoring Assessment Program (AMAP) says that the Arctic is warming twice as fast as the rest of the planet. Estimates suggest the polar ice cap might disappear completely during the summer season as soon as 2040, perhaps much earlier. 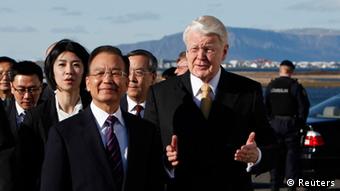 That would enable commercial shipping routes between Asia and Europe as well as between Asia and North America. Last year, international companies increasingly used the northern sea route along the Russian coast to transport gas and other goods to Asia.

But it's not just shipping rights and trading interests which are driving China's push in the Arctic. The area is also home to huge natural resources. Estimates suggest around 13 percent of the world's undiscovered oil reserves and at least 30 percent of its gas are buried under the Arctic ice. As the world's largest energy consumer, China is hugely interested in Arctic exploration. And the Arctic also has substantial reserves of gold, diamonds, zinc and iron.

Who owns the Arctic?

Five countries are considered “Arctic states” - Canada, the US, Russia, Norway and Denmark (along with Greenland and the Faeroe Islands). Finland, Sweden and Iceland are also members of the Arctic Council which deals with the future development of the North Pole region. China, Japan, South Korea and the European Union are trying to achieve permanent observer status.

The move has to be approved by all eight members of the Arctic Council. Permanent observer status grants countries invitations to all Arctic Council meetings and a better chance of contributing to discussions.

Under the UN Convention on the Law of the Sea, a coastal nation can claim exclusive economic rights to natural resources on or beneath the sea floor up to 200 nautical miles (370km) beyond its land territory.

But if the continental shelf extends beyond that distance, the country must provide evidence to a UN commission which will then make recommendations about establishing an outer limit. The US has not ratified the convention.

Scramble for the Arctic

With the chances of exploiting the Arctic region for economic purposes increasing, several Arctic neighbors have stepped up their military activities in the far north. Potential conflicts over maritime borders also affect shipping routes. The Northwest Passage that could significantly reduce the distance between Europe and Asia runs through Canadian territory. Canada claims the waters as a national shipping route. The US and the EU on the other hand say the area is international territory.

The Northeast Passage that runs along the Russian coast reduces the distance between Shanghai and Hamburg by around 6,400 kilometers (3,970 miles) and cuts a week off delivery times compared to the conventional route via the Strait of Malacca and the Suez Canal. Russia is keen on using transit fees to finance the expansion of its infrastructure.

According to the Journal of Energy and Security, around 46 percent of the Chinese gross national product is linked to shipping. China also imports 85 percent of its energy from abroad. It's little surprise then that China is pushing ahead in the race for the Arctic to gain access to crucial sea routes.

On one hand, China's ambitions in the Arctic are treated with suspicion. But at the same time, Scandinavian countries are eager to boost trade with the rising economic giant and gain access to its vast market. 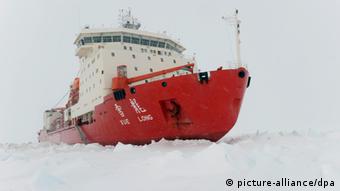 Last year, Iceland's government rejected a plan by multi-millionaire Chinese developer Huang Nubo to build a sprawling tourist resort in the northeast corner of the island, saying it did not meet legal requirements on foreign ownership.

There was speculation that the tourist resort was a cover for Chinese plans to build a port or even a naval base. Huang Nubo is now negotiating a new plan with Icelandic municipalities in which he would instead lease the property.

Since 2004, China has had its own research station on the Norwegian Arctic island of Spitsbergen. Beijing is currently building a huge ice-breaker to be completed in 2013, and has planned several research expeditions to the Arctic in the coming years.

So far, China hasn't unveiled an official Arctic policy. But the world's second-largest economy is apparently preparing to play a key role in securing the region's riches.

"Countries closer to the Arctic, such as Iceland, Russia, Canada, and a few other European countries may tend to wish the Arctic were private or that they had priority to develop it," Cui Hongjian, head of the European department of the China Institute for International Studies, told reporters before Premier Wen Jiabao's visit to Europe. "But China insists that the Arctic belongs to everyone just like the moon."

Chinese officials have also sought to play down fears about Beijing's aspirations in the Arctic.

"China is willing to make contributions towards the peace, stability and sustainable development of the Arctic region, and it is on that basis that China seeks cooperation with Iceland," Chinese Deputy Foreign Minister Song Tao told reporters last week.

Last week's meetings between Wen and Icelandic Prime Minister Johanna Sigurdardottir resulted in agreements to cooperate in the Arctic region, in marine and polar science and in geothermal energy.

A threat to the environment? 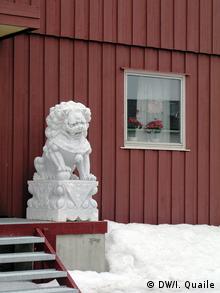 The growing scramble to secure economic interests in the Arctic region has sparked concerns among environmental activists. Many are worried about the lack of binding rules that would protect the Arctic from commercial exploitation. The International Maritime Organization (IMO) is working on a polar code for the region. But negotiations over environmental guidelines have been postponed to 2013.

Lars Erik Mangset, a maritime expert at the Worldwide Fund for Nature (WWF) Norway, said new rules are urgently needed to make the increasing ship traffic safer and more eco-friendly. "It's unacceptable that these regions which are of global importance aren't protected and that commercial interests get priority over development of environmental guidelines," Mangset set.

He added that the region would remain dangerous for shipping and oil platforms even if polar ice melted rapidly. Shipping accidents and gas disasters would be difficult to control in these remote areas.

Insurance company Lloyds recently published a study on the Arctic that supports the concerns of environmental groups. "The consequences of a catastrophe in the Arctic could be much worse than in other regions," the study says. It recommends strong governance, well-planned risk management and urgent investment in Arctic research to minimize dangers.

Chinese Prime Minister Wen Jiabao has been visiting Iceland on the first stop of a four-nation European tour. He was set to meet Chancellor Angela Merkel in Germany on Sunday. (22.04.2012)

Two years after the oil spill in the Gulf of Mexico, energy groups Exxon and Rosneft plan to cooperate in exploiting the Arctic's oil reserves. It's a big challenge - not least for the region's vulnerable ecosystems. (21.04.2012)