China plans to invest $361 billion in renewable energy generation by 2020. The investment reflects Beijing's focus on cutting the use of fossil fuels and combating pollution. 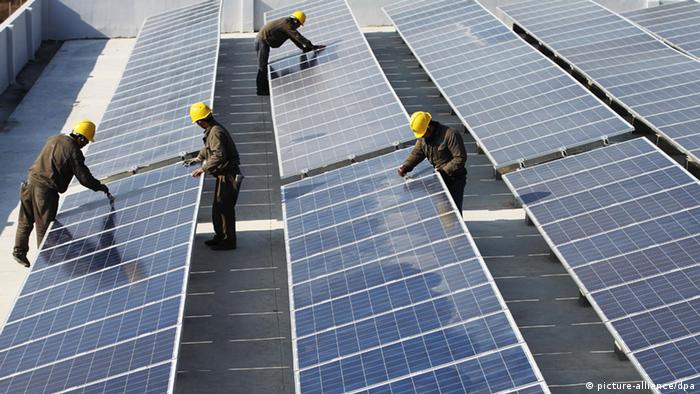 Installed renewable power capacity in the world's largest energy market - including wind, hydro, solar and nuclear - will make up half of all new electricity generation by 2020, China's National Energy Administration (NEA) said on Thursday in a blueprint document laying out plans to develop the nation's energy sector between 2016 and 2020.

China became the world's top solar generator last year, but the NEA said that renewables will still only account for just 15 percent of overall energy consumption by 2020, equivalent to 580 million tons of coal.

China's coal consumption fell in 2015 to reach just over 4 billion tons after production peaked in 2013 and has been falling ever since. Its coal imports also fell in 2015 by 30 percent.

Solar power will receive 1 trillion yuan, as China aims to boost capacity five-fold or by about 1,000 major solar power plants. Some 700 billion yuan it said would go on wind farms, 500 billion to hydro power, and tidal and geothermal would get the rest, the National Development and Reform Commission (NDRC), the country's economic planner, said in December.

According the NEA, China invested 139.6 billion yuan (around $21 billion) in new coal-fired power stations in 2015, less than a fifth of the investment in clean energy sources. Investment in hydro amounted to 78.2 billion yuan ($11.7 billion) and in nuclear power investment was 56 billion yuan ($8.4 billion), it said. Since 2012, solar capacity has grown over seven-fold, while wind has almost doubled. 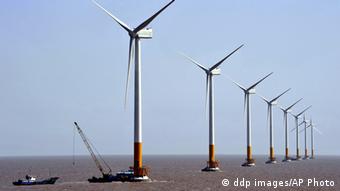 The government earlier expected to have 150 gigawatts of solar power and 250 gigawatts of wind by 2020, PVnews.cn reported last year, citing Zhu Ming, deputy director of renewable energy department at the NEA.

By 2020, China's government expects the country to reach at least 200 GW of solar and 250 GW of wind power and is targeting annual cost reductions of 2 percent for solar and between 3-5 percent for wind.

The country is also investing heavily in generating capacity from hydropower, geothermal and biomass. The 22,500 MW Three Gorges Dam project in Hubei province, the largest hydroelectric dam in the world, is the showcase project.

In wind power, where again China has been building a strong national wind turbine manufacturing capacity, alongside its build-up of wind farms. By the year 2015 there were five Chinese firms in the world's top ten wind turbine producers, with Goldwind emerging for the first time as the world's number one producer.

State-directed finance is fuelling this surge, mediated via development banks.

Brought together by the People's Bank of China, the Green Finance Task Force in China issued its long-awaited report ‘Establishing China's Green Financial System' in April 2015 – making China the first country in the world to set specific guidelines for the issuing of green securities.

The report further notes that China will need investment each year of at least 2 trillion yuan ($320 billion) or more than 3 percent of GDP, for at least the next five years if it is to achieve its green targets.

China's banks are already moving into this new space for the issuance of green bonds. The Agricultural Bank of China was the first Chinese financial institution to do so, raising $1 billion from a three-part green bond in October 2015.

The green bond market in China is set to grow significantly as the government there has given the go-ahead to banks to launch large issues. The Shanghai Pudong Development Bank came out with a green bond worth 20 billion Yuan (US$4.3 billion) in January 2016.

Victims of their own success

The cost of building large-scale solar plants has dropped by 40 percent since 2010. But record installations of renewables have overwhelmed the ability of the nation's grid to absorb the new electricity.

The mismatch has left solar and wind capacity sitting idle in some parts of the country, hurting companies such as China Longyuan Power Group Corp. and China Datang Corp. Renewable Power Co.

All 33 miners who were trapped in a coal mine following an explosion in Chongqing, China have been confirmed dead. Chinese work safety officials have promised to "strictly punish" those responsible for safety lapses. (02.11.2016)

A look at China's efforts to reduce coal use

China is consuming less coal as a result of the government's initiatives to curb carbon emissions as well as restructure the nation's economy. But how is this development impacting attempts to combat global warming? (26.01.2016)

Beijing has been hit by a blanket of dangerous smog as authorities issued a red alert for the second time this month. The smog highlights the dangerous reliance of China on dirty coal. (19.12.2015)

The top US diplomat didn't pretend to have any inside knowledge of Trump's climate plan, but said issues often look different once in office. One Trump insider said the president-elect remained eager to abandon the deal (16.11.2016)

China's government is trying to reduce surplus capacity in the coal industry. This surprising move is benefiting foreign markets and having an adverse effect on the steel industry, DW’s Frank Sieren writes. (02.10.2016)