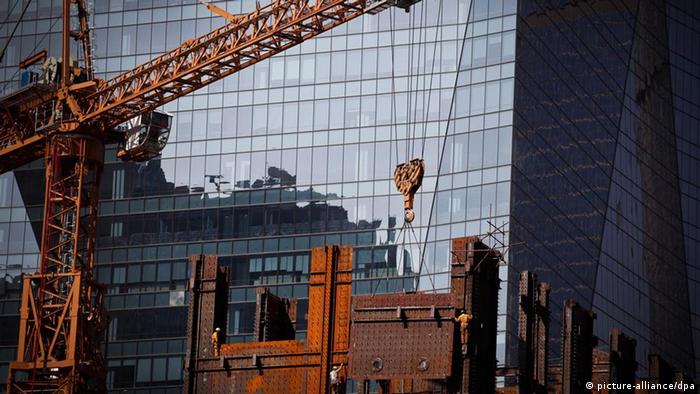 Chinese gross domestic product (GDP) in the second quarter hit the government's target of 7.5 percent growth year-on-year, up slightly from the first-quarter figure of 7.4 percent, according to the country's national statistics bureau.

Tax breaks for small businesses and government investments in rail networks and public housing construction were among the factors that boosted the economy.

Bank lending also expanded, reaching a trillion yuan (118 billion euros) in June, up from 870 billion yuan in May, according to figures provided by the central bank, the People's Bank of China. The government has encouraged increased lending in rural areas and to small businesses.

Compared to anemic European growth figures, the Chinese figure looks very high, but the past three years have seen the slowest growth in China's GDP since the 1990s, at 7.7 percent in 2012 and 2013 - down from double-digit growth during the 2000-2010 period.

China's leaders view economic development as crucial to political stability, and its 12th five-year plan, covering the period 2011-2015, aims to rebalance the economy to become less dependent on volatile export markets - though exports will remain important - and more based on domestic consumption, according to political risk consultancy Eurasia Group.

Analysts point to unresolved problems in the economy that may drag on GDP growth in future, including an enormous amount of accumulated bad debt in the banking system and signs of an impending bust in the country's long-running real estate bubble.

Ma Xiaoping, Beijing-based economist for British bank HSBC, cited the real estate sector as the "main downward risk in the second half" and noted that the property investment growth rate showed a significant decline.

"If this trend continues, we will need to see whether infrastructure construction and manufacturing can offset the impact from the property industry decline," she told the AFP news agency.

National Bureau of Statistics spokesman Sheng Laiyun acknowledged that the property market correction will add to economic pressures in the short term.