Beijing has detained several lawyers and legal staff on subversion charges, according to family and colleagues. The arrests are part of a crackdown on dissent and follow months of secret detention. 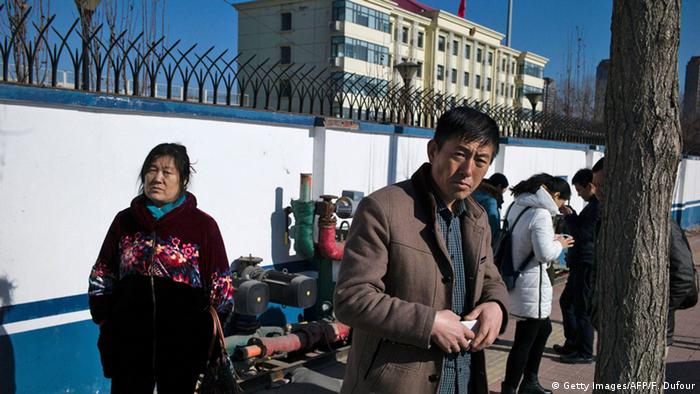 Among the detained is Zhou Shifeng, director of law firm Fengrui, his family was told on Tuesday.

The families of Wang Quanzhang and Li Shuyun, a lawyer and apprentice lawyer at the firm, were also notified of their arrests by police in Tianjin.

According to the Reuters news agency, as many as 38 of its staff and associates - lawyers and activists - have been questioned or held since last July in a government effort to hold to account those it says aim to subvert state power.

State subversion carries a maximum sentence of life in jail in China.

Fengrui has represented several high-profile clients, such as the ethnic Uighur dissident Ilham Tohti. State media has accused the firm and its associates of orchestrating protests outside courts and politicizing ordinary legal cases to attract international attention.

The arrests are part of a clampdown on dissent that has seen up to 300 human rights lawyers and activists detained and/or questioned since last July, authorities, according to rights groups. Many had been held in undisclosed locations for months.

Swedish activist Peter Dahlin, who works for a human rights group in China, has also been detained on suspicion of endangering state security, his colleague said on Tuesday.

Campaigners consider it the fiercest attempt by China to silence activists in decades - despite its insistence that it is adhering to the rule of law.

China's ruling Communist Party does not tolerate organized dissent and has tightened controls on civil society under the leadership of President Xi Jinping.

Chinese state media report numerous lawyers arrested during a recent crackdown on legal activists have pled guilty to a range of offences. Hong Kong barristers have launched a global petition against the arrests. (19.07.2015)

US urges release of Chinese dissidents in growing crackdown

Washington has renewed its call for China to release a Christian rights activist and an underage boy suspected to be under house arrest. Secretary of State John Kerry attacked China for imprisoning people without cause. (15.10.2015)