The Chilean government has rejected a plan to build five hydroelectric dams on rivers in the south of the country. Its decision follows years of campaigning by environmentalists and local communities. 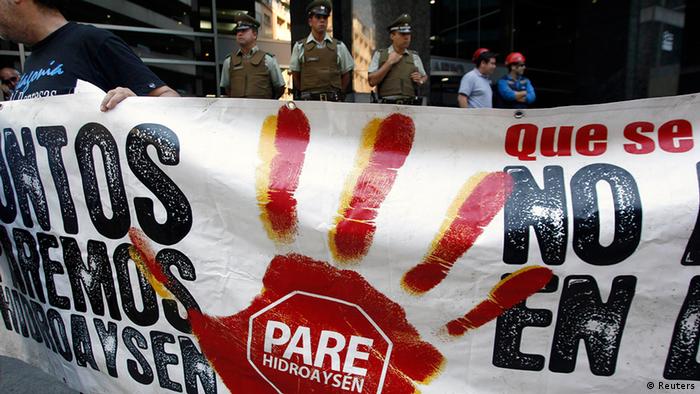 The HidroAysen hydroelectric dam project was dealt a heavy blow on Tuesday evening, when it was rejected by a government committee because of complaints.

A committee that included the ministers of agriculture, economy, energy, environment, health and mining unanimously voted to accept 35 complaints against the $8 billion (5.9 billion euro) plan.

The committee "decided to side with complaints presented by the community," Environment Minister Pablo Badenier told reporters. "As of now, the hydroelectric project has been rejected."

The project envisaged the building of five dams in the Aysen region of southern Patagonia, which HidroAysen company executives said would bring cheaper energy, jobs and infrastructure to the sparsely populated area.

Opponents complained that the plan required 5,700 hectares (14,000 acres) of land to be submerged and would involve cutting through swathes of forests to build the dams along the Baker and Pascua rivers. Fears were also expressed that the project, which would have involved the relocation of some three dozen families, would destroy vital habitat for the endangered Southern Huemul deer.

There were scenes of jubilation in the capital city Santiago's Plaza Italia as opponents of the dam heard the news.

"This is a historic day," Juan Pablo Orrego, international coordinator of the Patagonia Without Dams campaign, told IPS news agency after the decision was announced.

"I am moved that the citizens… managed to finally inspire a government to do the right thing in the face of a mega-project," he added.

"We did it. We won. Viva Chile!" and "Goodbye HidroAysen!" were among the messages tweeted on the group's Twitter account.

The company may still appeal the project. The dam project, one of numerous schemes around the world that have sparked protests, would generate about a third of Chile's current energy needs. Experts say that Chile, which has a heavy reliance on a energy-intensive mining industry, will have to triple its current 18,000-megawatt power generation capacity within 15 years.

However, since being elected last year, Chilean President Michelle Bachelet had said the plan was not viable.