Changing your thinking is not a game

"It is very important for such problems to have a human face," says Georg Hobmeier. He is one of the brains behind the mobile game "Burn the boards", which firmly highlights the dangers of e-waste.

When Georg Hobmeier and Tilmann Hars founded Causa Creations in 2014, the company wanted to produce mobile games with a cause. Their latest release - Burn the Boards - focuses on the life of the people who reuse and recycle the waste millions of others carelessly dump every day: electronic waste, or e-waste. Whether it’s discarded televisions or mobile devices, this kind of waste becomes the livelihood of the poorest of the poor. In Burn the Boards, the player becomes Arun, an Indian villager who has taken his family to the big city to find a better life. He gets a job in a backyard workshop where he has to recycle as much e-waste as possible, in order to earn enough money to survive. But the job is extremely dangerous for his health.

Global Ideas: With Burn the Boards you've developed a game that allows players to encounter a massive problem, e-waste. How do you get gamers to really stick to the game in spite of its complex subject?

Georg Hobmeier: We tell the story of a man in all his drama, starting with a flight, follow his life, work, family, and deteriorating health. It is very important to lend a human face to such problems. See, figures, charts and calculations do not affect humans, they need a human face to make an emotional connection.

Where does your interest in e-waste come from? Did something trigger it? 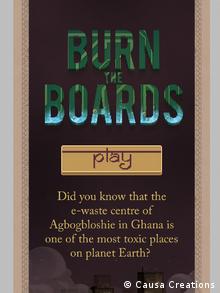 Our company Causa Creations was founded while we were working on a game for Amnesty International India. That game starts at the opposite end of the value chain, with the conflict between tribal communities and mining companies. Because that is a very extensive project, we did a lot of prep work. In this context, the idea for Burn the Boards came up. We had built a small prototype of an e-waste simulator during the process and got more and more engrossed in the topic.

The process even resulted in the creation of another small game - Where the phones go - a interactive text adventure. That game follows the recycling chain to Africa.

"It is very important for such problems to have a human face,"

Who is your target audience, who should play Burn the Boards, only people in industrialized countries?

We don't have Europe in mind exclusively, but the Indian market as well. Especially in the emerging markets, people have an incredible amount of technology available, smart phones are getting cheaper. The people in these countries now experience the same situation as the people in Europe. They lose touch with the kind of reality that we show in the game.

We also want players to understand the impact that the very device has, that they are using to play the game. I always find it surprising that even the most educated people do not know how toxic a smartphone is when it comes to recycling. Once you start to disassemble them, to burn them, to dissolve them in acid, the most incredible toxins will emerge. Creating awareness about that is very important. We are talking about 50 million tons of electronic waste per year, not only a couple of tons. 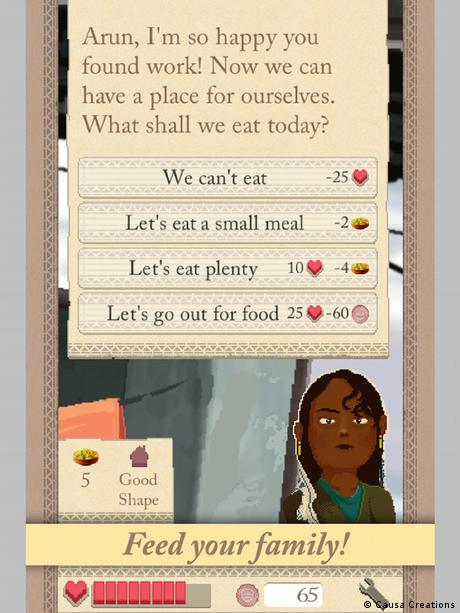 And mobile games are one of the best approaches to creating awareness?

Yes, because it is sort of self-referential. You recycle e-waste on a device that could just as well be the object that you recycle in the game. Computer games are the mass medium of the 21st century. With each new project we start, we realize at some point that there is actually no market for it yet. But the market still has a lot of niches where we can operate.

Your game manages to involve the gamers, they experience the dramatic situation of the main character and his family.

I always try to draw a parallel to a documentary film that can be enthralling and artistic. It does not need to be in a purely educational format. In the field of video and computer games we saw a few titles over that past years that have paved the way for games like ours. One is Cart Life by Richard Hofmeier, a game about low-paying jobs, like taking care of a newspaper stand, or selling donuts. The player learns a lot about the history of the people in the game while playing. Another example is Papers Please by Lucas Pope, a simulation of a border post. The player here checks passports to weed out fakes or dangerous people. These games have created acceptance for games with a more serious background, even if our game looks different.

I'd like to get back to your personal background. You've said earlier that you are often in India, mainly for developing games?

This is mainly due to our collaboration with Amnesty International. We have devoted the majority of these trips to mining and tribal societies, but of course we also visited some areas where e-waste is recycled. That doesn’t happen in huge factory buildings but in poor residential neighborhoods. I was surprised to see that happen. You walk around and suddenly someone is working on some old displays while kids play right next to him.

How much technical knowledge do you have, or how much is needed for a game like Burn the Boards? 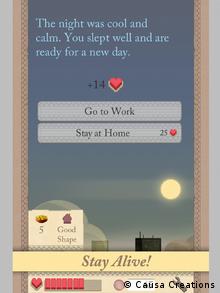 Some of our employees come from hardware development, they know the elements can be found on such boards. We did not want the game to be too complicated. That is why we opted for a clearly structured mechanism. But non of the elements in the game are fake. You can actually find elements on boards that can explode when heated or touched the wrong way. The same goes for toxic fumes. So it's not out of thin air when that happens in the game, that's all real.

"You have to find a balance between family, work and survival to win the game."

Is it possible to win the game?

Yes of course. There are even several endings. Overall, we have about 640 different puzzle variations in the game. It also gets more difficult over time, new electrical parts appear, from only two elements in the beginning to 12 in the end. This results in very complex puzzles. You have to find a balance between family, work and survival to win the game. After a while you can find ways to handle the game without getting yourself killed.

If you start to make money you can actually buy the end of the game. If you make 1000 coins, you can buy a small shop by the side of the road to sell food, or if you can save even more money you might be able to get a proper education at a community college. The best possible ending means a lot of hard work and is rewarded with your own electronics store.

What has to happen in the real world in order to tackle the e-waste problem?

We need to have a debate about our own consumer behavior and then we need a debate on the production of electronics. I suspect that many devices break after a certain period of time to make people constantly buy new things. And if you buy five new flat screen TVs over a period of ten years you definitely contribute to the problem. Phones are only a small fraction, but any form of electronics is problematic. The boards and the metal are not the only problem, it is also about the different plastics that are used.

What I think really helps is to draw attention to the health risks. If you take a look at what happens when the substances accumulate in the body, then no eye should remain dry.

Do you already notice a positive change or do people remain indifferent?

Of course I have a certain view of society. Most people I know aren’t the ones throwing away their phones or buying the biggest TV sets. But I think there is the potential for people to understand. But there needs to be a trigger, some line needs to be crossed so that the masses understand what is actually going on. Whether that is intense media coverage, or, unfortunately, a global catastrophe. The problem is that you will have to fight a main interest of the entertainment industry, which to sell their goods and most of the manufacturers won't want to stop doing that.

Burn the Boards in the Google Play store