Changing minds about genital mutilation in Iraqi Kurdistan | Middle East| News and analysis of events in the Arab world | DW | 03.03.2016

High rates of female genital mutilation set Iraqi Kurdistan apart from the rest of the country. More than the men, it is the women who keep the cruel tradition alive. Florian Neuhof reports from the Iraqi countryside. 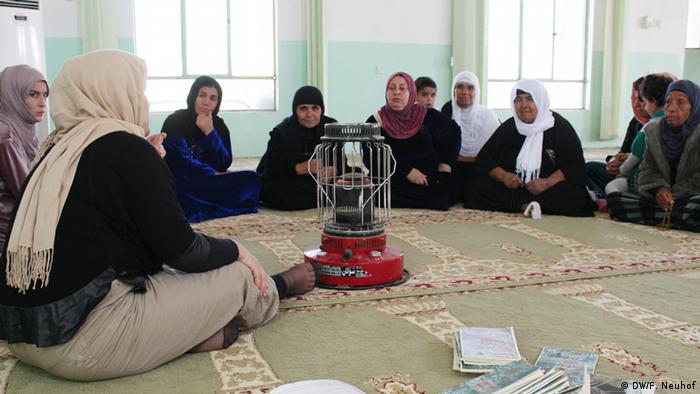 In the hamlet of Tirpaspyan, a loudspeaker crackles into life, summoning the local women to the village mosque.

On this sunny afternoon, it is not the imam's voice that is carried across the flat roofs of Tirpaspyan, a small village embedded in the farmland around the Iraqi Kurdish capital of Irbil.

Instead, Kurdistan Rasul has resolutely swatted away attempts by the village elder, a couple of busybodies and an unruly gaggle of teenage boys to sabotage the meeting in the mosque's courtyard. Her voice booms through the unpaved streets as she repeats her invitation, and the women soon trickle in.

Once they are seated in a circle of plastic chairs, 30-year-old Rasul cuts to the chase. Over the mosque speakers, she had announced a discussion about health issues; now she is more specific. She has come to convince the villagers to stop the practice of female genital mutilation (FGM) that is plaguing women in Iraqi Kurdistan.

Although on the decline, it continues to be a problem in the autonomous Kurdish region in northern Iraq, and young girls still fall victim to it. Rasul rattles through the health impacts of the practice, highlighting the risk of infections and infertility, and soon ties the issue in with her personal story.

"When I was a little girl it would have been very good for me if someone had educated my mother and told her not to circumcise me," she tells the women.

The numbers vary according to the research on the issue, but Rasul's fate is typical for Kurdish women: Between 41 and 73 percent of women have been mutilated, most of them between the age of four to seven.

Fortunately, today's girls are at a significantly lower risk of being cut. Research by the German organization Wadi, which Rasul works for, shows that FGM rates have dropped sharply in many districts where the practice used to be common, and that it has even disappeared entirely in others. 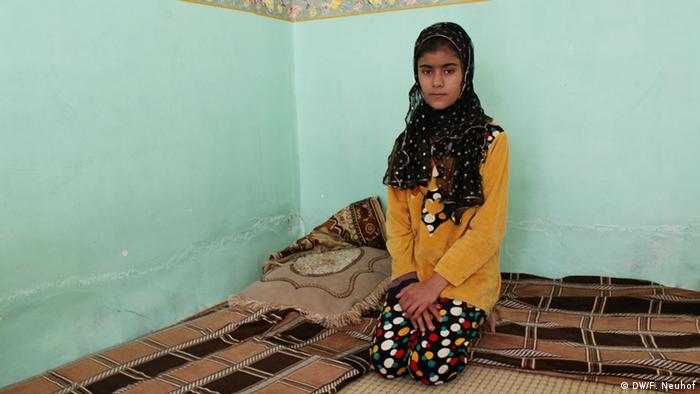 Thirteen-year-old Ariso, who lives in a village near Tirpaspyan, was also subjected to genital mutilation

Much of this is down to the tireless work by men and women like the energetic Rasul, who has visited over 400 villages in Irbil governorate over the past two years. These visits remind her that the practice is still alive in Kurdistan and is no different today than when she was a girl.

On the way to Tirpaspyan, she stopped at a house to ask for directions. After a brief conversation, the family admitted that their two girls, aged 12 and 13, had been circumcised.

"What you did is a crime," Rasul berates the parents.

"No, it is tradition," replies the father.

One of the most startling things about FGM in Iraq is how common it is in some parts of the Kurdish region, while it is almost non-existent in others.

Within Iraq, the Kurds are split into culturally distinct Sorani- and Badini-speaking tribes. Genital mutilation has seeped into tradition in Irbil and Sulaymaniyah governorates where Sorani is spoken, while it has not in the Badini-speaking Dohuk governorate.

Speaking to a group of men in the village of Edi Qizlar earlier in the day, Rasul gets an earful of the beliefs spawned by Sorani tradition.

Senegal: Trying to stamp out FGM

A young woman fights for an end to female genital mutilation

"If a women isn't circumcised, any animal she slaughters is haram. If there is no man about, she should guide the hand of a boy while he kills the animal," shouts an elderly man who came to the village to arrange a marriage for his son. Even food and drink served by an uncircumcised women is haram, an Islamic term meaning "forbidden," he continues.

Rasul, a practicing Muslim who wears a headscarf and a long dress covering her arms and legs, has heard this many times, and she knows how to counter these myths. She reminds her listeners that none of the Prophet Mohammed's wives or daughters were cut, while his sons were all circumcised.

"Islam is a beautiful religion and these are customs that are not part of it," she says.

It is an argument she thinks has not yet been accepted by many imams in Kurdistan. While FGM was made illegal by the Kurdistan Regional Government (KRG) in a law against domestic violence in 2011, many of the religious leaders still advocate the practice, says Rasul.

"Half of the religious men still say it should be done. We want you to convince them it is a bad thing. Convince them and you convince us," he says.

In Kurdistan's patriarchal society, it would be easy to assume that men are the main enforcers of FGM. In fact, it is the women who are instrumental in keeping the tradition alive: mothers and grandmothers who pass on the suffering that has been inflicted on them, midwives who have earned handsomely over the years from performing the procedure.

"The old women are the hardest to convince," acknowledges Rasul.

She readily plays on women's fears to turn them against the practice.

"Most of the men say they want a second wife because their wife doesn't feel sexual desire. They want to marry an Arab or Syrian woman because they have not been circumcised," she tells the women of Tirpaspyan. 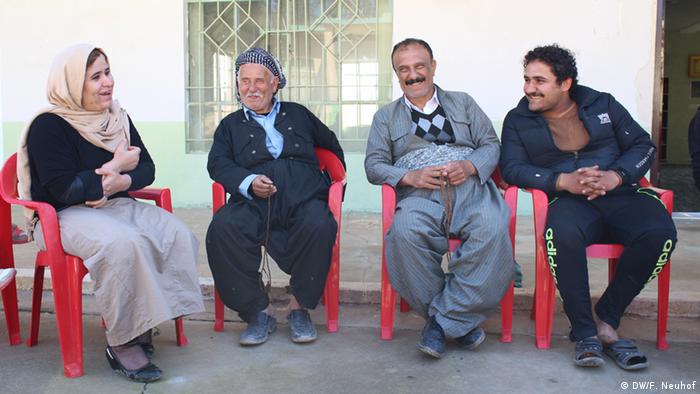 Rahul talks about FGM with both men and women, here in Tirpaspyan

Her talk with the men centers more on domestic violence and treating their spouses as an equal. The men view women's rights with suspicion, fearing they would end up under their wife's yoke.

"Don't take yourself as an example, you are educated. Our women would just take control," says one old man.

Perhaps Rasul's biggest strength is her ability to be kind to those whom she holds responsible for the misery of so many, including herself.

As soon as she has seated the women of Edi Qizlar on the floor of the village mosque and begun to speak, a portly old woman in a long black dress and white headscarf interrupts.

"If I had known this meeting was about circumcision, I wouldn't have come. I used to do all this, now they tell me it shouldn't be done. I'm not convinced," 67-year-old Azeema Pirdawad interjects loudly.

Before retiring, Pirdawad was one of the many midwives who roamed the countryside and visited the cities to mutilate girls. She is one of the "old women" who victims frequently refer to when they recall the trauma of losing their genitals.

Rasul says that Pirdawad circumcised around 5,000 girls over the years: "She is a butcher."

The former midwife still keeps the blade she used in her house.

Rasul tells her the practice is not in accordance with the Koran, which immediately seems to bring about a change of heart in Pirdawad.

"No, you were not aware," Rasul calms her.

By the end of the session, Pirdawad seems convinced. "I have two granddaughters, and I would not do it to them," she exclaims, drawing a round of applause from the other women. 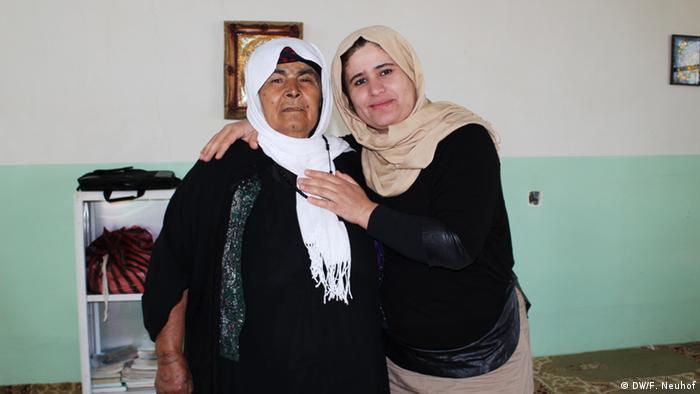 As the women get up to leave, Rasul goes to Pirdawad, hugs her and bids goodbye in warm words. It is an act of restraint.

"Being nice to midwives is the most difficult part of my work. Inside of me I want to hurt them, but I have to suppress that. If I get angry with them they won't listen to me and I won't be able to change anything," she says later.

Rasul, who admits to having been traumatized for a long time after her circumcision, is committed her cause, which leaves her exhausted at the end of every day. She is strong and determined, but she cannot shut herself off to the suffering she witnesses all too frequently.

"On many days, I cry all the way home," says Rasul.

More than 200 million girls and women in 30 countries have been subject to female genital mutilation (FGM), according to the UN children's agency. The UN is working to eliminate the practice. (05.02.2016)

How to become a woman, without being cut

Many FGM traditions are rooted in a transition to womanhood. Maasai girls in Kenya are continuing rich, coming-of-age rituals - without genital mutilation - and learning about their bodies instead. (18.09.2015)

Millions of women all over the world have been subjected to female genital mutilation (FGM). A center in Berlin is trying to help women to put the pain and trauma behind them. (17.09.2015)