The Champions League group stages draw ever closer and the first set of qualifiers were decided on Tuesday night. A flurry of goals in the opening quarter of an hour got the excitement all started. 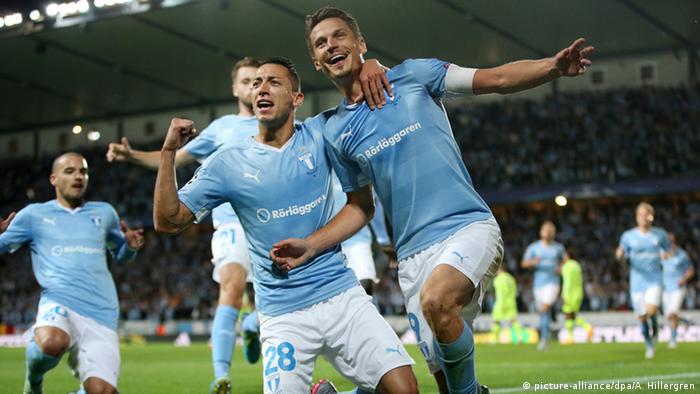 Celtic couldn't hold on to their first-leg lead and missed out on Champions League football after losing 2-0 to Malmo in Sweden. Elsewhere, Rapid Vienna's fairytale qualifying campaign came to a valiant end in Ukraine. Valencia and Dinamo Zagreb also progressed, as did Maccabi Tel-Aviv who surprisingly saw off Basel.

In the opening 25 minutes of Tuesday night's Champions League playoff games, a remarkable 11 goals were scored as the sides involved went all out to make the group stages of the sport's elite competition. In Sweden, Celtic's good start was cut short when Markus Rosenberg's header put Malmo into a winning position. It could and perhaps should have been more before the break, as the Scottish champions looked short of ideas and discipline - striker Leigh Griffiths was fortunate to stay on the pitch after a deliberate foul that only saw him cautioned. Urged on by their home fans, Malmo doubled their lead in the second half from another corner as Felipe Carvalho's header couldn't be stopped by Dedryck Boyata on the line. Celtic failed to find an answer, to the delight of the home fans as Champions League qualifying once again proved Celtic's downfall.

Rapid Vienna dared to dream they could topple Champions League regulars Shakhtar Donestk and looking back they will feel they should have realised that dream. Despite going a goal down after ten minutes, a determined header from Louis Schaub and a superbly struck free kick from Steffen Hofmann turned the game in the Austrians' favor. However, two minutes after Hofmann's set-piece, Shakhtar leveled, pivotally put the hosts back ahead on aggregate. A quieter second half ended in a flurry when Rapid captain Mario Sonnleitner was sent off, reducing Rapid's chances further. Nevertheless, Robert Beric was found unmarked in the box but the unmarked striker remarkably headed wide. There was even time for Rapid to hit the post deep in injury time, but their lack of composure cost them dearly. 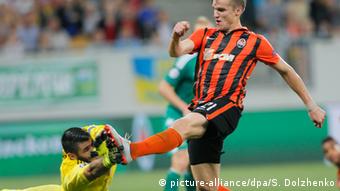 Rapid had the chances to win the entertaining game in Ukraine

Alvaro Negredo's delightful chip put Valencia into a commanding aggregate lead, something which wasn't hindered by Andrea Raggi's equalizer after 17 minutes. Elderson's goal fifteen minutes from time though left Monaco needing just the one goal to advance and it took a smart save from Australian keeper Matt Ryan to make sure the hosts were left needing too much, too late.

A raucous, yellow and blue stadium was left bouncing with celebration as Maccabi Tel-Aviv edged out their Swiss superiors thanks to their first-leg performance. A fantastic free kick from Lucy Zuffi put Basel ahead and in an advancing position, but Eran Zehavi, scorer in the first leg, hauled Maccabi level. A number of fouls disrupted the flow of the game and Basel never found a needed winner, leaving the Israeli side to celebrate.

Dinamo Zagreb overcame relentless rain, an instant equalizer and a red card at the start of the second half to see off their Albanian visitors 4-1 on the night, with two goals coming despite their one-man disadvantage.

Celtic was on course for a crucial first leg win in Glasgow with a two-goal lead, but a late strike means the momentum lies with Malmo. Rapid Vienna's hopes of qualification have taken a blow with defeat to Shakhtar. (19.08.2015)