Celtic was on course for a crucial first leg win in Glasgow with a two-goal lead, but a late strike means the momentum lies with Malmo. Rapid Vienna's hopes of qualification have taken a blow with defeat to Shakhtar. 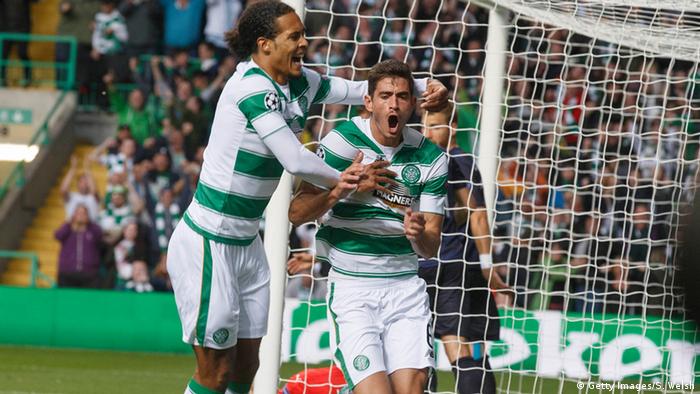 An injury-time goal from Jo Inge Berget has kept Malmo's dream of qualification alive despite losing 3-2 to Scottish champions Celtic.

Ronny Deila's men looked set to take a two-goal advantage to Sweden for the second leg until the Malmo forward hammered in a loose ball in the fifth minute of stoppage time.

The Hoops had started the game at a roaring pace, Leigh Griffiths firing Celtic into the lead in the fifth minute. The Scotland striker was picked out by an exquisite pass from Stefan Johansen. After Griffiths opened the scoring on five minutes, Nir Bitton added a second just a few minutes later.

Celtic's intensity dropped despite the best efforts of the home crowd who continue to make Celtic Park one of the most impressive atmospheres on the continent. Former Celtic player Berget fired Malmo back into the game early after the break, but Griffiths headed in to complete his brace on 61 minutes.

However, Berget's goal on 95 minutes leaves Celtic with more to do in Sweden. The travelling supporters celebrated on a rainy Glasgow evening, while Deila's men will be cursing missed chances in the first period.

Rapid with it all to do 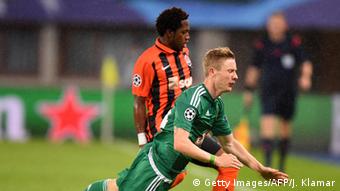 Meanwhile, Rapid Vienna went down at home to Shakhtar Donestk as the Austrian champions look to qualify for the Champions League group stages for the first time in 10 years.

The Ukrainian side has played their domestic matches away from the Donbass Arena as a result of the conflict breaking out in the country. Under head coach Mircea Lucescu, Shakhtar has won eight of the last nine championships and the 2009 UEFA Cup as they continue to provide an excellent platform for South American talent.

Indeed, it was 27-year-old Brazilian attacking-midfielder Marlos who scored the decisive goal in the final moments of the first-half. Shakhtar had survived a few scares throughout with Louis Schaub showing his prodigious talents for Rapid early on.

Shakhtar goalkeeper Andriy Pyatov made an outstanding save on 44 minutes - and within seconds, Lucescu's men scored at the other end. Yaroslav Rakitskiy dribbled down the wing and picked out Marlos on the penalty spot and the Brazilian drilled the ball into the far corner of the net.

Elsewhere, Spanish side Valencia took a step towards the Champions League group phase after a comortable 3-1 win at the Mestalla over Monaco.

Rodrigo opened the scoring for Valencia on five minutes before Monaco's Pasalic drew his side level just after the break. But Nuno Santos' men pulled clear in the last half hour with Dani Parejo and Sofiane Feghouli securing the win.

Despite leading 1-0, Skenderbeu will need to secure a win at the home of Dinamo Zagreb to become the first side from Albania to appear in the Champions League group stages. The second legs take place next Tuesday.