Officials at CERN have launched an inquiry into a viral video shot in front of a Shiva statue on their premises. The recording shows a woman "stabbed' by a man in a black robe and surrounded by more cloaked figures. 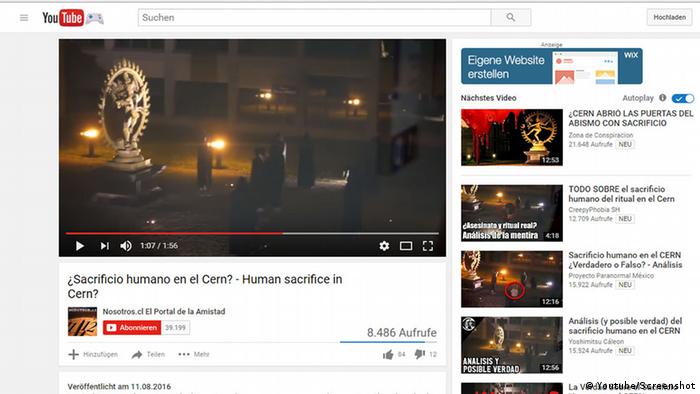 The video, shot from a window of a nearby building, is a "work of fiction showing a contrived scene," officials said on Thursday.

"These scenes were filmed on our premises, but without official permission or knowledge," a spokeswoman for the European Organization for Nuclear Research (CERN) told the AFP news agency.

CERN is the top physics lab in Europe and home to the world's largest particle accelerator. The spoof occult ceremony took place at the main square of the lab's campus that houses dormitories and office buildings in Geneva, Switzerland.

The statue on the square shows Shiva, the Hindu god of destruction.

"CERN does not condone this type of spoof, which can give rise to misunderstandings about the scientific nature of our work," according to the spokeswoman.

The institution "welcomes every year thousands of scientific users from all over the world and sometimes some of them let their humor go too far," she added.

The video raised questions on security at the elite scientific facility. The spokeswoman, however, stressed that the management checks IDs "at each entry to the CERN site whether it is night or day." She also implied that people responsible for the prank had access badges.

Geneva police told AFP they discussed the video with the lab officials but were not conducting their own investigation.

CERN said the inquiry was underway but described it as an "internal matter."

The European Organisation for Nuclear Research, CERN, is again generating particle-collisions at a remodelled particle-accelerator. The world's most complex machine is running with twice the energy as it did before. (03.06.2015)

Thousands of people marched in London and other towns and cities against a huge rise in energy prices. Prime Minister Liz Truss faces a crisis of public confidence less than a month after she took office.