The European Organisation for Nuclear Research, CERN, is again generating particle-collisions at a remodelled particle-accelerator. The world's most complex machine is running with twice the energy as it did before.

CERN - Next Generation - The Search for Dark Matter Continues

The search for dark matter

At the Large Hadron Collider in Geneva this Wednesday, scientists performed the first collisions at a rate of 13 teravolts (TeV) - and the LHC is now generating data again. The LHC was re-started on Easter Monday after two years of renovations and improvements, and reached its full power of 13 TeV on May 21. Engineers have run several test collisions. Physicists say they hope this will open the door to an even deeper understanding of our universe.

Since its initial launch in 2008, CERN researchers in Geneva have been using the 27-kilometer-long particle accelerator to smash protons together at just under the speed of light. Directly after the collision, the particles break up into their smallest building blocks, like Hadrons and Bosons. One of them is the Higgs-Boson, a particle that was previously only known as a theoretical quantity, but its existence was physically proven just before the LHC was shut down three years ago. The particles are recorded with huge sensors that have a similar function to light-detecting chips in digital cameras.

Since 2013, what's probably the world's most complex machine has been given a significant upgrade. And after the relaunch, it is scheduled to have a potential energy of 13 Teraelectron-Volts (TeV). So far its record energy generation was 8 TeV.

Initially, the engineers wanted to go as high as 14 TeV, but eventually decided to limit themselves - also to reduce the probability of technical defects and failures. "At 13 TeV, the facility will be much more reliable and stable," Andrey Golutvin says. The professor for particle physics is working on one of the four huge detectors, called LHCb. This detector is dedicated to the discovery of asymmetry between matter and antimatter.

To make collisions more effective, the CERN physicists are currently testing a new way of shooting protons through the pipe. The amount of particles in each "bunch" or "packet" flying through the LHC will be reduced; however, the rate of collisions will be increased. The distance between packets of flying particles will now be extremely short, requiring only 25 nanoseconds to transpire. This will make it easier for the detectors to analyze the data from the collisions.

Even after the restart, the LHC will first run at a low energy-level. What will follow are tests and trials of the system, before the first collisions will be recorded in early June. "Only then can we start collecting data for particle physics," Golutvin explains. "Before that, the incoming data is mostly interesting for people tasked with running the accelerator."

After the discovery of the Higgs-particle, the researchers are now hoping to solve other mysteries. "The new energy-level will enable us to look for heavier particles with three times more mass than we found before," the Russian physicist says. "This was not possible in earlier experiments."

First of all, the researchers want to prove the current standard model for particle physics. "After discovering the Higgs-Boson, now it is very important to improve the accuracy of the measurements, to better understand the parameters of that particle," Golutvin says. "At higher energies, we will be able to detect the Higgs-Boson much more often."

This also increases the probability of finding close relatives of the Higgs-Boson. CERN researchers have theorized that a field of Higgs-particles fills the universe like invisible glue, on which particles are rubbing and gaining their mass.

Even more fascinating for the scientists would be physical proof of super-symmetry. 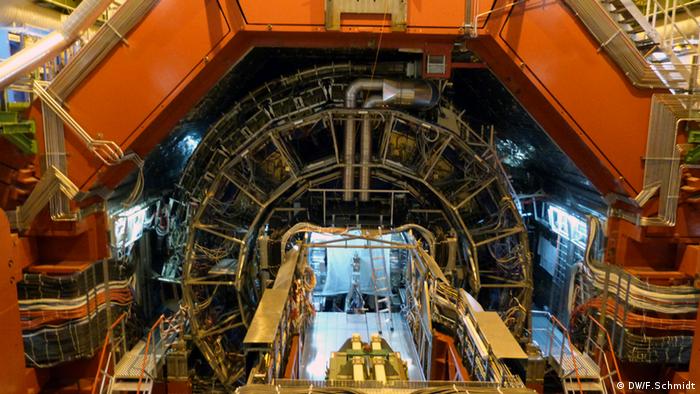 This theory postulates that each elementary particle has a heavy counterpart, and that there are super-particles called Neutralinos. These highly stable particles could comprise dark matter. Should that mystery be solved by the LHC, it would be another milestone in the history of the six-billion euro particle accelerator.

Engineers have also used the two-year break to enhance the stability of the accelerator. To cope with higher potential energy, the upgraded electric contacts have improved the cooling systems for the supraconducting of electric magnets, and they have put in new and finer layers of detectors.

Furthermore, the mechanisms for selecting the relevant particle-smashing-events have been fine tuned. It is impossible to record and process all of the billions of particle crashes that take place at the LHC. Without some pre-selection, the computers would be quickly overloaded. However, the amount is still impressive: Before, the LHC processed about 20 million crash-test-pictures per second. Now the rate will increase to 40 million.

More than 10,000 researchers from over 100 countries are participating in the CERN research. But not all of them are in Meyrin - a suburb of Geneva. While several thousand work there, many more stay at home and work from their office computers at university institutes and research institutions all over the world. Twenty-one member states are financing the lion's share of the research. Germany pays about 20 percent of the annual budget, which amounts to one million Swiss Francs (850 million Euros).

The Theory of Everything