Who will govern Central African Republic until the next elections? The transitional parliament will decide which of 24 candidates will lead the country on Monday. 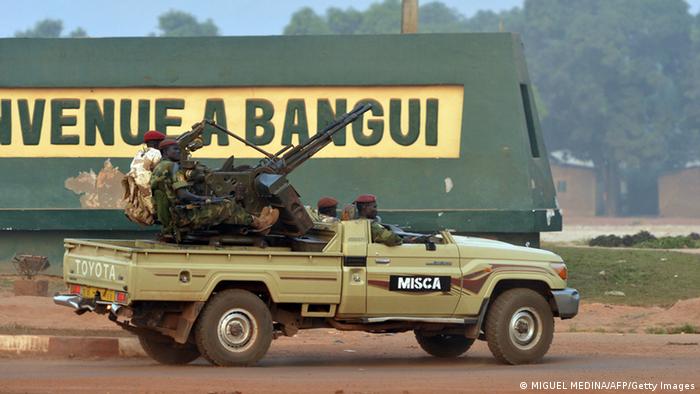 The mood is tense in Bangui, the capital of the Central African Republic (CAR). International troops patrol the streets in an attempt to prevent outbreaks of violence. Two groups face each other. On the one side the Muslim-dominated Seleka movement who has overthrown President Bozize in March 2013 and terrorizes parts of the population since then. On the other the Christian civil militia "anti-balaka," or "against the machetes," which was was founded as a reaction to the Seleka movement and now violently attacks the country's Muslim minority.

While international troops work to prevent the worst atrocities in the capital, the situation outside of Bangui is getting out of control, according to Thierry Vircoulon of the International Crisis Group think tank. "Again and again there are attacks in all parts of the country, from Seleka as well as from anti-balaka," he added.

On Thursday (16.01.2014) a representative of the United Nations warned of the danger of genocide in CAR. The persecution of Muslims contains elements of conflicts the UN has also found in Rwanda and Bosnia, said John Ging from the UN Office for the Coordination of Humanitarian Affairs (OCHA).

Who can reunite the country? 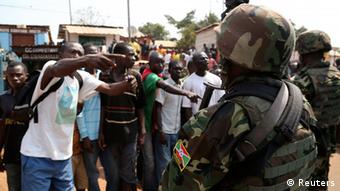 Michel Djotodia, a Muslim, was the head of the interim government for almost a year. A week ago he stepped down due to international pressure. Now a successor needs to be found.

The transitional parliament wants to make a decision on Monday (20.01.2014). It has presented a long list of criteria which the candidates for the presidency have to meet. According to the list, candidates who had a political position under interim President Djotodia are excluded as are all party chairmen and members of the military. People who were members of a militia are also excluded.

The small Muslim minority is particularly worried about whether the future president will consider their interests. The fear of new violence is high. "The crisis should encourage us to rebuild our nation from the scratch," said Imam Kobine Layama. He has long made efforts to push for understanding among religions in the country.

"Our representatives should not be lead by passion in the votes but by brotherhood and the national community," he said.

While the leaders discuss new leadership, there are troops from nine different countries in CAR. About 1,600 French soldiers have been in the country since December 2013. They work together with a peace mission from the African Union (AU). Nearly a quarter of the promised 6,000 AU troops have been sent to the country. Rwanda, which was the scene of genocide just two decades ago, sent 850 soldiers to CAR. 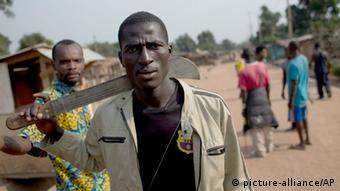 Christians armed themselves with machetes to fight against the Seleka movement

Relations between France and Rwanda are extremely stressed as the Rwandan government has accused France of intervening in the 1994 genocide on the side of the murderers. But the Rwandan Army spokesman Joseph Nzabamwita said he does not see any obstacles for a successful cooperation in CAR.

"We have a mandate which unites us,” he told DW, adding that the French and the Rwandans will work together in CAR to bring peace to the country."

Their success also depends on the behavior of the interim government under a new leadership. For Vircoulon it is clear that "the priorities of 2013 are still valid in 2014." Thus the transitional parliament has to stick to the goals the rebels agreed on - but never met - after the overthrow of President Bozize. The goals were to guarantee security and to support the people who suffered from the fighting, and to rebuild the administration and to prepare elections.

Free and fair elections in CAR should take place in 2015 at the latest.

Conflicts in South Sudan, the Central African Republic and the Democratic Republic of Congo are threatening - to varying degrees - to engulf the region. Rebels fighting in one country use another as a safe haven. (14.01.2014)

Vircoulon: "ECCAS and Chad played a key role (in CAR)"

President Djotodia and Prime Minister Tiangaye of the Central African Republic have stepped down, bowing to pressure from regional leaders. A more inclusive transitional authority could fill the vacuum. (10.01.2014)

French troops fail to stop the violence in CAR

France launched Operation Sangaris one month ago in a bid to stop the catastrophe unfolding in the Central African Republic. But the violence has only escalated, and the number of displaced has risen to one million. (09.01.2014)