Unidentified gunmen have killed at least 12 people in Bangui, the capital of the Central African Republic. Among them were churchgoers and a pastor who had campaigned for peace with local Muslims. 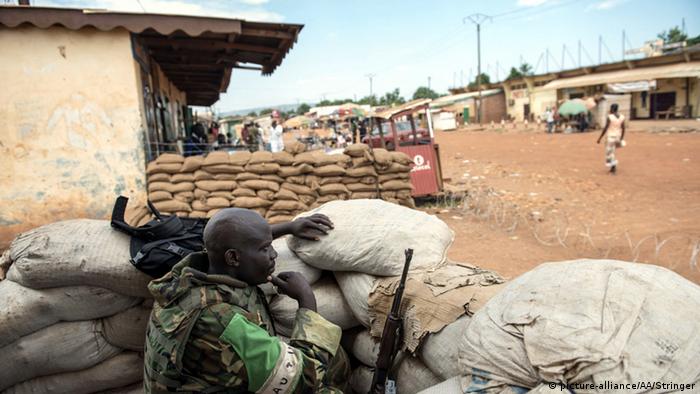 Among those killed was pastor Albert Tougoumale-Baba, who had advocated a non-aggression pact to allow Muslims to hold proper burial ceremonies.

Churchgoers fled through a hole in the wall made by police when gunfire and grenades interrupted their morning service.

It was not immediately clear whether all those killed were at the church or killed during skirmishes in the surrounding area.

The same church was the scene of a fatal attack in 2014.

The French news agency AFP later cited security sources in PK5 as saying a shootout started when men in a militia group led by an individual calling himself Force rammed through a roadblock.

The 12,000-strong UN mission MINUSCA said it had sent patrols "to secure the [PK5] zone and other key points" in Bangui.

AFP said tensions within PK5 had already been running high between armed groups and traders fed up with paying extortion money.

The region's UN humanitarian coordinator, Najat Rochdi, called on women to raise their voices against the recruiting of youth as fighters.

"Once again it is the civilian population, especially women and children who pay the price of violence," Rochdi said.

Anne-Marie Boyeldieu, head of mission for Doctors Without Borders' (MSF), emphasized that medics were treating what it said initially were 50 injured people "regardless of their background, religious or political affiliations."

Hospital sources said at least 16 people had died, including the priest and a child, while 96 people were being treated for wounds.

A relatively quiet spell prevailed from late 2015 into 2016. But last year, violence surged. On April 10, at least 27 people were killed, including one UN soldier, when Rwandan troops attached to MINUSCA conducted a sweep in PK5.

In protest, 17 corpses with bullet wounds were laid in front of the UN base in Bangui.