More than 20 people died in clashes when UN troops conducted an operation in the volatile PK5 neighborhood of Bangui earlier this month. DW spoke to the head of the mission. 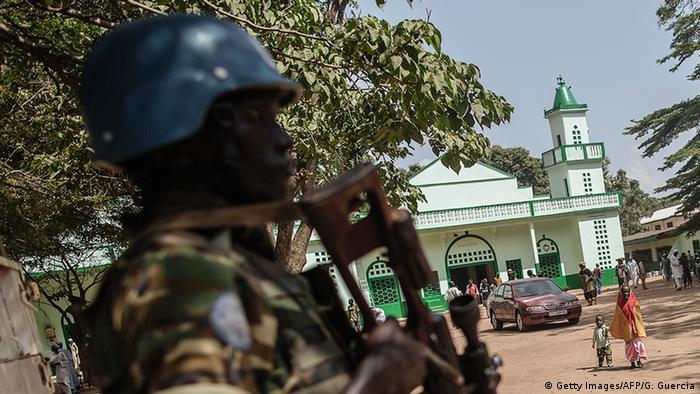 More than 20 people, including civilians, were killed and over 135 people injured, following what the humanitarian organization Doctors Without Borders called the worst violence in the capital Bangui since 2015. In early April, UN troops of the MINUSCA peacekeeping mission entered the PK5 neighborhood in what they said was an attempt to stamp out criminal gangs.

The International Committee of the Red Cross confirmed that fighters, as well as civilians hit by stray bullets, were among the wounded. Residents of the neighborhood later laid out the bodies of those killed in front of the UN compound.

DW spoke to Parfait Onanga-Anyanga, the UN Special Representative for the Central African Republic and head of the UN peacekeeping mission to the country, MINUSCA, who defended the operation in PK5, an area in the Central African Republic's (CAR) capital Bangui which lies only 5 kilometers (3 miles) from the city center. The mainly Muslim neighborhood is still seen as one of the focal points of the conflict between the Seleka and anti-Balaka militia groups.

The UN mission also came under fire in the past week over the arrest of a peacekeeper suspected of trafficking arms in the country.

DW: Can you explain the circumstances around the violence that followed a MINUSCA operation in Bangui. Parfait Onanga-Anyanga: We have to put the events into the right context. The violence did not begin with the MINUSCA operation. The violence started long before that. It was extremely regrettable to see that MINUSCA, the peacekeepers in CAR, particularly in Bangui, have no other option than to resort to self-defense in the protection of their mandate. The Sukula operation that was led jointly by the government and the mission in PK5 had only one intention. That was to arrest criminal individuals and organizations that have taken the entire population in PK5 as hostages so that they can be held accountable for the crimes and so that we can better protect people in PK5 and free this extremely vibrant community from the violence imposed upon them by these actors. And to ensure that PK5 can become the dynamic economic hub of the entire city or even country. So we deeply regret these events.

Residents have complained about the passivity and inaction of MINUSCA. What's your response to that?

Now we are engaging the population in PK5. I do believe that the majority of the population wants to move forward and they are still asking the government and MINUSCA to go ahead with its efforts to root out this criminal organizations from PK5. It is a very difficult process in a context where we still have a very weak nation. Reforms are underway. Today there is no reason for anyone in CAR to take up weapons as a means of being heard and to make any claims over marginalization or identity. Every type of concern in CAR today can be part of an inclusive dialogue that the African Union is offering.

World in Progress: Dire situation in the Central African Republic

How far has the process of disarmament gone in the area?

The government has initiated a process for the disarmament, mobilization and reintegration of former combatants. This is all moving forward. Unfortunately we still have a couple of hardliners in the community who still believe that clinging on to their weapons is the only way that their demands and claims will be heard. But there is a time for everything and I do believe that the time for peace has arrived in CAR and I'm very confident that if everyone keeps doing the right thing and that if we dedicate ourselves to the cause of peace in CAR, the majority of us will be stronger than those who are still vying for easy gains and who still want to resort to the barrel instead of the ballot box. But it is still work in progress and I'm very confident that we will continue to advance the cause of peace in the Central African Republic.

Parfait Onanga-Anyanga is the UN Special Representative for the Central African Republic and head of the UN peacekeeping mission MINUSCA.

The interview was conducted by Eric Topona.

CAR President Faustin Touadera: 'Conflicts are why the population has no hope'

The president to the Central African Republic, Faustin Touadera, says young people in his country need vision and hope to stop them fleeing to Europe. (24.11.2017)