June 22 would be the 100th birthday of German tech genius Konrad Zuse, a pioneer who invented the world's first programmable computer. His Z3 model was used in World War II; his Z4 is in Munich's Deutsches Museum. 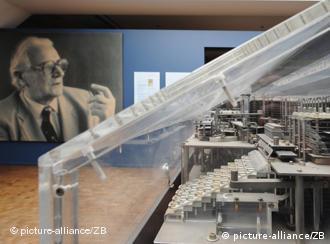 Zuse's very first computer, the Z1, has been replicated in a Berlin museum

Konrade Zuse built his first mechanical computer in his parents' living room in Berlin in 1936. The attempt was unsuccessful, but he persevered, developing further models, including the Z3.

His early inventions were destroyed in a bombing attack that decimated his family's house in 1943. But Zuse managed to rescue his Z4 model, which is currently housed in the Deutsches Museum in Munich.

The Z4 weighed more than two tons and could do about four calculations a minute. That may sound like a dinosaur in terms of contemporary technology, but it was the world's first programmable computer - and it still works to this day.

Ulf Hashagen, a researcher affiliated with the Deutsches Museum in Munich, said Zuse was one of several engineers in the US, Great Britain and Germany who developed machines that led to the creation, in 1949, of the first machine to be called a computer: the von Neumann computer, named after Hungarian-American mathematician John von Neumann.

Zuse spent his working life inventing, but retired to painting

"Zuse's computer was a relay machine with a binary number system. It was a program-controlled machine, and it has many ideas inside which were important for the development of the computer," Hashagen told Deutsche Welle.

Zuse's first computers couldn't store information. They were programmed by means of tape containing information punched into it; this was then fed into the computer. The first tapes were made of discarded 35 mm film that his friend, a projectionist, supplied from a Berlin movie theater. Zuse used a train conductor's hole-punch to produce the program that told the computer what to do.

"In many ways the Z3 was the really a pioneer machine because it was the first free programmable computing machine in the world that worked in 1941," Hashagen said.

Although his early attempts were financed by family and friends, Zuse soon caught the attention of the Nazi government. His work was financed by the Reich Luftfahrt Ministry, a government body in charge of developing war planes. The ministry funded him because they needed flutter calculations for airplanes.

"This was a big problem for military airplanes during the war and so they wanted his machine," Hashagen said.

By the end of the war Zuse was already working on his next machine, the Z4. As the war came to a close, he managed to get the machine onto a train bound for Bavaria, where - unlike his earlier efforts - it survived.

Canadian professor Michael Williams, an expert on early development of the computer and board member of the large engineering association IEEE, said Zuse was misunderstood after the end of the war, and was excluded from further developments taking place in Britain and the USA.

"He was taken to Britain and interviews were done with him. But in those days … the people who talked to him didn't realize what he had done," Williams said.

According to Williams, that was largely due to the fact that Zuse's English wasn't very good at the time, and although Zuse was proud of his work, "they didn't understand what he had been doing and they told him go back to Bavaria and carry on."

Zuse's Z1 was destroyed in a bomb attack during WWI

And carry on he did. Zuse picked up where he left off on the Z4, which he eventually completed and which was used for many years in a technical school in Zurich.

After the war, life wasn't easy for Zuse, who had a family to support. He couldn't afford to attend international conferences and was unable to get supplies which he needed to further his development.

Cut off from developments

"During the occupation time in Germany there were laws set up by the Americans that would not allow him to use modern electronics, so he continued building computers using vacuum tubes even when modern transistors were available," Williams explained.

In 1949 Zuse founded a company that produced and sold computers. The Z5 followed. His first German customers were for the optical industry, and Zuse began building special machines for calculating optics. His first computer based on magnetic storage, the Z22, didn't enter the market until 1956. But he still continued to work independently from the computer world that was developing in the USA.

"Zuse produced some very interesting and fundamental work, but he was cut off from other developments even after the war," Williams said.

He did make some technical advances that stuck, however, and some of them were used in fairly modern computers that were produced in the 1970s. But despite his genius, Zuse was gradually losing ground to US competitors like IBM. It was difficult for him to finance research and development, and he was behind in developing software.

Facing insolvency, he sold his company in 1967, took up painting, and spent the rest of his life in retirement. His hobby was portrrait painting - including one of Bill Gates that still hangs in Gates' office at Microsoft headquarters in Seattle.

Zuse died in 1995, fully aware of the advances computers had made in his lifetime but no longer actively involved in them.

To mark the 50th anniversary of the introduction of the birth-control pill in the US, Carl Djerassi tells Deutsche Welle what events led him to this medical breakthrough, and how it changed the world. (06.05.2010)

International inventors meet in Nuremberg to display their prototypes from November 5 to 8. Young students show promising potential, but one aisle remains empty: The Iranian group didn't get visas. (07.11.2009)

Researchers in the city say their latest piece of equipment can carry out 158 trillion calculations per second. With all that power, they are hoping for ever more detailed climate predictions. (10.12.2009)