She wrote radical Expressionist poetry, won the Kleist Prize and cultivated an eccentric, outsider persona in Berlin. 150 years after her birth, it's time to rediscover German-Jewish poet and artist Else Lasker-Schüler. 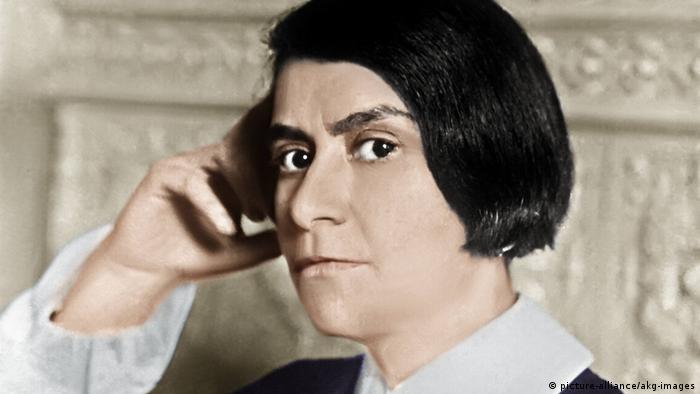 If you take a trip to Wuppertal's Elberfeld suburb in search of Jewish German poet and playwright Else Lasker-Schüler's place of birth (on February 11, 1869) you'll only encounter two huge, dark slabs of granite there — the house was destroyed during World War II.

The monument portrays Lasker-Schüler with a stern facial expression contrasted with one of her most recognized poems, "Weltflucht" (Withdrawal from the World):

"I would flee into the immensity

Perhaps — it's too late to turn back!

Since I was choked with you.

I wanted threads to encircle me —

In order to escape

"Withdrawal from the World" was first published in German in 1902 as part of her first collection of poetry, Styx. Today, it sounds almost like a prequel to all the themes that Else Lasker-Schüler (1869-1945) would continue to deal with in her work: loneliness, love, grief and religion.

At the time of its initial publication, many of Lasker-Schüler's contemporaries derided such "women's poetry" — and the press ripped the contents of the book apart, saying she suffered from an "overstrung nervous system."

At this point, shortly after the turn of the century, Else Lasker-Schüler had already moved to Berlin, living with her first husband, a Jewish doctor by the name of Berthold Lasker, who showed her all the excitement of Bohemian life in the city at that time. But the marriage didn't last. She divorced him and soon, in 1903, married again — this time to author, publisher, gallery-owner, musician and composer Herwarth Walden.

Her marriage to Walden, and the bohemian milieu she moved in at the time, was the subject her 1912 novel, My Heart, which was ultimately a farewell of sorts to her husband and a doomed Berlin cultural scene on the eve of war.

Read more: Else Lasker-Schüler: 'My Heart'

Mysticism was all the rage during this period, dominating everything from literature to philosophy to theology. Else Lasker-Schüler found inspiration in Syrian, Egyptian, Greek, Jewish and Christian archetypes, creating a cosmos of her own imagination, portraying herself as a character called Yusuf, Prince of Thebes — which she developed through hundreds of stories, letters and poems that were likely also inspired by her own eccentric everyday life.

Having apparently spent much of her life in the thralls of romantic love, this theme was also grist for much of her poetry.

Meanwhile, Lasker-Schüler's avowedly experimental Expressionist style dismayed mainstream critics who tried to grapple with her abstract idioms. One newspaper claimed in 1910 that her brain must have been entirely mushed up. A court also delivered a judgment claiming that one of her poems lacked "any noteworthy sensibility."

Born Elisabeth Schüler on February 11, 1869, Else was the daughter of a Jewish banker. Eleven-years-old when her favorite brother died, at 21 she lost her mother.

Having married and divorced twice, for half of her life Lasker-Schüler had no apartment of her own and was often destitute as she moved between boarding houses and temporary lodgings. In 1927, her only son, Paul, died of tuberculosis. She never spoke about the father. 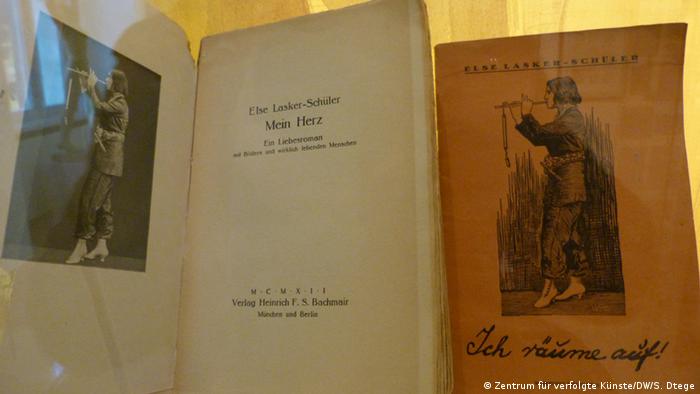 Lasker-Schüler's novel "My Heart," on show here at the Center for Persecuted Artists in Solingen, is a must-read in DW's list of great German books in translation

In 1932, Lasker-Schüler received the Kleist Prize, the highest German literary award at the time. After being assaulted on the street several times, she turned her back on Germany, finding support in Switzerland from the Jewish Cultural Association.

In the following years, the Jewish poet traveled to Palestine several times, before settling in Jerusalem in 1937. In the prose volume Das Hebräerland she declared Palestine a "dream of the Holy Land."

The outbreak of World War II prevented the author from returning to Switzerland and Lasker-Schüler passed away on January 22, 1945 in Jerusalem, where her last volume of poetry, Mein blaues Klavier, appeared in 1943. She was 75 years old.

Read more: A tour of cabaret-era Berlin as populism rises

Germany is once again honoring the artist with a commemorative stamp to mark her 150th birthday on February 11. The stamp depicts an excerpt from one of her drawings, for the Expressionist poet not only wrote, she was also a visual artist. Her paintings were confiscated from the Berlin National Gallery in 1937 and labeled "degenerate."

Swiss writer and painter Friedrich Dürrenmatt, on the other hand, celebrated her as the "savior of the German language in barbaric times." Poet Gottfried Benn called her "the greatest lyricist Germany has ever had."

While Franz Kafka "could not stand her," another Jewish writer Karl Kraus said she was "the most wayless phenomenon of modern Germany." In any case, the poetess was a diligent letter writer.

At least 651 of Lasker-Schüler's letters are documented. And she received the most beautiful responses from her Expressionist painter friend Franz Marc — painted postcards. 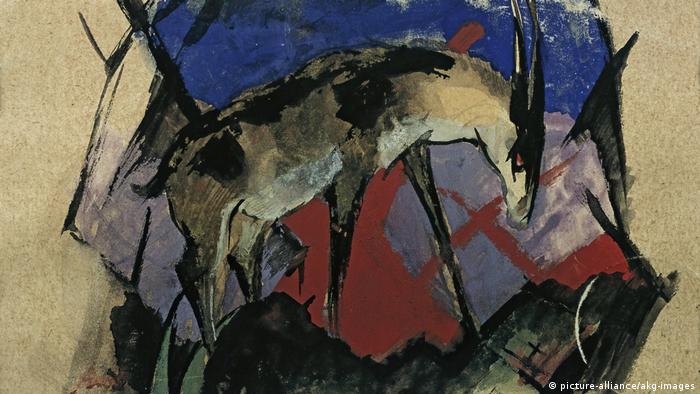 To date, around 450 composers have set Else Lasker-Schüler's poems to music. Suhrkamp publishing house has honored her with an important complete edition. Secondary literature about the poetess appears limitless. Yet to a wider audience, she remained largely unknown — like so many writers who were banished into exile.

Many events and activities are planned for the next couple of months to mark the 150 anniversary of Lasker-Schüler's birth, including a symposium at the Bergische Universität in her birthplace of Wuppertal. Podium discussions about anti-Semitism are also on the agenda. Rappers will rock to celebrate her, while one Wuppertal theater is showing a dance performance to pay homage to her intensely imaginative work.

100 years of Bauhaus: Myths and misunderstandings

Bauhaus is considered an export hit from Germany. Many who love the famous school of design reduce the fundamental ideas to one bold formula: square, practical, good. Here are eight misunderstandings about Bauhaus. (08.01.2019)