Destroyed during the final months of World War II, Dresden's Church of Our Lady has been rebuilt to its former glory during the past decade, serving as a symbol of reconciliation in reunited Germany. 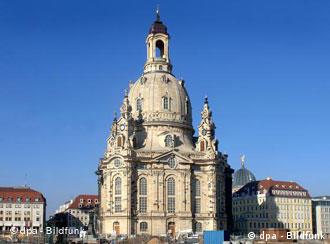 That's what one Dresden visitor called the Frauenkirche shortly after its completion in 1743. More than two and a half centuries later and 60 years after the church's destruction, the city will celebrate its resurrection with a consecration service on Sunday.

After more than a decade of construction and millions of euros in private donations, the "stone bell" once again towers over the city's skyline.

Read more about the church's storied past, present and future in this DW-WORLD dossier.

A significant masterpiece of European architecture, the Dresden Church of Our Lady, is being rebuilt after heavy Allied bombing destroyed the cathedral during World War II. It is a unique symbol of reconciliation. (Jan. 23, 2002)

As the final stones are put in place in Dresden's Frauenkirche, long-time residents of the city recall their horrifying memories when Allied bombers destroyed the city. (Oct. 26, 2005)

Sixty years ago Sunday, Allied bombers attacked Dresden and the thousands of residents and refugees who lived there. Traces of the militarily dubious decision to bomb the city remain visible today. (Feb. 13, 2005)

Blowing a Trumpet for the Frauenkirche

Ludwig Güttler is one of the world's most successful trumpet virtuosos. From the former East Germany, he also played a key role in the campaign to reconstruct Dresden's landmark Frauenkirche, or Church of our Lady. (Oct. 4, 2005)