Fifty-nine years after it was destroyed in the Allied bombing in World War II, the Church of Our Lady in Dresden finally had its cupola and gilded cross replaced at a ceremony on Tuesday. 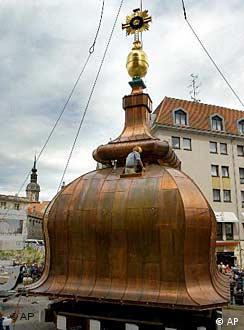 Officials and guests gathered in the eastern German city Tuesday to mark the crowning of the Church of Our Lady's bronze dome, which after the bombing that began on Feb. 13, 1945 has been a potent symbol of the horrors of war.

The baroque Frauenkirche, Germany’s largest Protestant church, was originally built in the heart of Dresden in 1743. It miraculously survived two days and nights of the bombing, before succumbing to the 1,000 degree Celsius heat generated by some 650,000 incendiary bombs that were dropped on the city.

The event not only leveled buildings, but also killed an estimated 135,000 people. 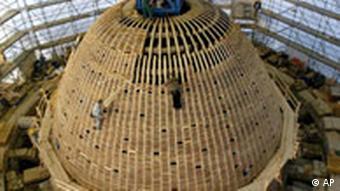 Carpenters prepare to work on the Frauenkirche's sandstone dome

The eight interior sandstone pillars supporting the colossal dome exploded; the outer walls shattered and nearly 6,000 tons of stone plunged to earth, penetrating the massive floor as it fell. The building vanished from Dresden's skyline.

The ruins of the Frauenkirche were a reminder of the horrors of that war, said Allan Russell from the Dresden Trust, in London.

"(The bombing of Dresden) was an act of war designed to bring the war to the end, but it was a brutal act," he told DW-RADIO.

In 1989, a handful of residents in Dresden formulated plans to rebuild the Frauenkirche. One early obstacle was a lack of funding, so in 1991, the residents formed a society in support of rebuilding the cathedral and collected donations from around the world.

Another issue was how to rebuild the church. Should it be altered in some way to represent the time that had passed between its construction and its downfall and the historical changes of that time span? 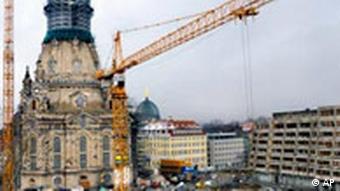 In the end, the society finally decided to restore the Frauenkirche to its original form. Reconstruction finally began in January 1993.

"We need to make a gesture back, to express our sorrow about the deaths and destruction and our determination to build things with our German friends for the future," he said.

Rebuilding the Frauenkirche cost some €130 million ($157 million), two-thirds of which was privately donated. Of the millions of stones used in the rebuilding, nearly 8,000 original stones were salvaged and set back in their place.

A computer imaging program which could move the stones three-dimensionally around the screen in various configurations was used to help architects find where the original stones sat and how they fit together.

The work will not end with setting of the church’s cupola and gilded cross on Tuesday.

Part of the Frauenkirche’s dome and the interior of the cathedral still has to be completed. Work is likely to be finished in 2006, in time for the city’s 800th anniversary.

U.S. chipmaker AMD has broken ground on a $2.4 billion factory in Dresden that will manufacture silicon wafers. It's another coup for the eastern German city that has become one of the region's few economic bright spots. (May 18, 2004)

Information on the reconstruction of Dresden