Fighting between Houthis and presidential guards in Yemen has ended for now. The capital, controlled in large part by Houthi rebel fighters since last September, was more tense and restless than usual on Monday. 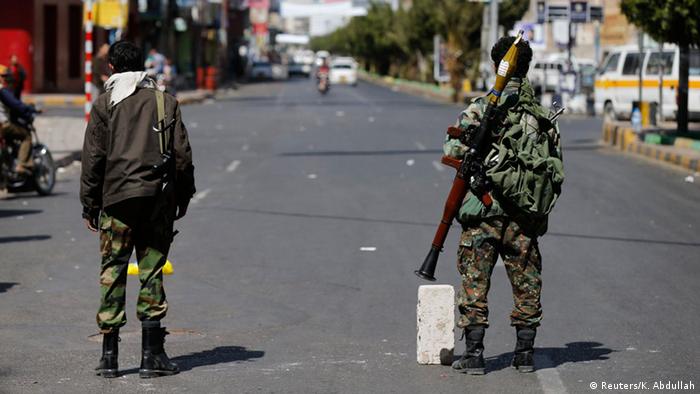 A ceasefire went into effect after negotiations to end fighting between the army and Houthi militiamen, state news agency Saba quoted Interior Minister Jalal al-Roweishan as saying Monday. Residents also told news agencies that the intense artillery and gun battles that had erupted earlier in the day appeared to have tailed off.

Earlier, the former journalist Nadia Sakkaf, recently appointed Yemen's information minister, told the Associated Press news agency that Houthis had seized control of state television and the Saba news agency. "This is a step toward a coup and it is targeting the state's legitimacy," Sakkaf said.

Both the military and Houthis accuse each other of instigating Monday's combat, which began with gunfire outside the presidential palace, one of a comparatively few sites in Sanaa still under government control. The fighting marks the Houthis' biggest challenge yet to President Abed Rabbo Mansour Hadi, who does not live at the palace. During talks to establish a new national constitution over the weekend, Houthi rebels took a top presidential aide prisoner.

On Monday, foreign envoys took to Twitter to relay their efforts to help negotiate an end to the fighting: "Working to promote ceasefire and political negotiations," a message on British Ambassador Jane Marriott's Twitter account read. "Challenging times. And all most Yemenis want is food and a job."

The Houthis, who want more rights for the country's Zaydi Shiite Muslim sect, seized most of the capital in September, and have since advanced on predominantly Sunni areas in central and western Yemen.

Critics of the Houthis see them as a proxy of Shiite Iran, which the rebels deny, and say they have allied with former President Ali Abdullah Saleh, ousted in a 2012 deal after Arab Spring-inspired protests. The Houthis have battled al Qaeda, a group they've pledged to eradicate, but remain hostile to the United States as well: The rebels employ the slogan "Death to Israel. Death to America."

Hadi and the Houthis accuse each other of not implementing a UN-brokered deal calling for the president to form a new national unity government and reform official agencies as the rebels withdraw fighters from cities they have seized. The Houthis have also demanded integration of their militiamen into Yemen's armed forces and security apparatus, something Hadi strongly opposes.