Catholic-Owned Drugstore Sends Condom Clients to Rivals | News and current affairs from Germany and around the world | DW | 18.03.2008

A drugstore owned by the Catholic Church in the German city of Fulda is compelled to send clients asking for condoms to the competition down the road because of a clause in the rental agreement. 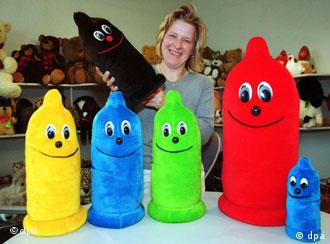 "We're not allowed to sell condoms, because the building belongs to the Catholic Church," Monika Michel, the manager of the branch said Tuesday.

The clause was completely out of keeping with the times, Michel said, but she acknowledged there was nothing she could do about it.

The Catholic bishop in the city, situated in the state of Hesse, was unapologetic when asked about the anomaly.

"I don't see anything strange in this. The church can't reject mechanical contraception on the one hand and on the other tolerate having condoms sold in a building belonging to the church," the bishop's spokesman, Christof Ohnesorg, said.

The condomless drugstore provides an amusing anecdote for the local tour guides, who stop for their customers to take photographs.

Fulda is a popular tourist destination. Boniface, the English-born saint often called the patron saint of Germany, lies buried in Fulda Cathedral. Charlemagne granted the local monastery a royal charter, and accompanying immunity, as far back as 774.

One Size Does NOT Fit All

Just when you thought sex was complicated enough, a team of German entrepreneurs is working on a sprayable condom. But don't get it confused with deodorant, nasal spray or oven cleaner. (28.11.2006)

What are your views on the Catholic Church's attitude towards condoms? Please include your full name and country with any reply.