In times of growing nationalism and populism, the Karneval der Kulturen, an annual multicultural festival in Berlin, appears to be more necessary than ever. It has been celebrating tolerance and diversity since 1996.

"In its 22nd year, [our festival] is more than ever for openness and cooperation, for courage and tolerance, for joy and human kindness," explains the office of the Karneval der Kulturen, or Carnival of Cultures, on its website. This spirit has kept the festival running through some trying times.

Until May 2017, the Karneval der Kulturen, which has been held every year since 1996, was struggling to attract the necessary financing.

New federal requirements, which include hiring security services, meant that the festival needed an additional 185,000 euros ($207,500) to cover the event costs. At the last minute, the Senate Department for Integration, Labor and Social Affairs, as well as the Department for Culture and Europe, agreed to support the event, saving this year's Karneval der Kulturen.

Secretary of State for Integration, Daniel Tietze, was also relieved, pointing out how "important and essential" the major event was in the current political and social context. 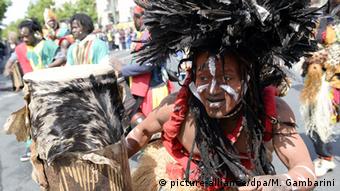 Colorful, joyful and international performances are expected at the Karneval der Kulturen

A colorful program for a colorful German capital

The Karneval der Kulturen will therefore take place for the 22nd time from June 2-5, and will reflect again on Berlin's diversity, with people from more than 180 countries living in the German capital.

The highlight of the four-day festival is the street parade through Berlin's multicultural district, Kreuzberg, held on June 4. Over 60 participating groups, including samba dancers, drummers and stilt walkers, will be performing.

The fall of the Berlin Wall led to an increased internationalization of the city, but also to the emergence of stronger nationalist and racist movements in the 1990s. Reacting to this phenomenon, the City of Berlin launched the Karneval der Kulturen to celebrate its multiculturalism and tolerance - and keeps doing so to this day.

Germany is celebrating its so-called "fifth season" with more than a few odd customs, many of which date back centuries. Here are five such traditions, including snipped ties and men dressed up as virgins. (24.02.2017)

The traditional samba group won for the first time in 33 years, beating the runner up by just 0.1 points. Their performance portrayed the human and environmental cost of the Samarco mining disaster. (02.03.2017)

The colors of Berlin's Carnival of Cultures

In times of growing nationalism and populism, the Karneval der Kulturen, an annual multicultural festival in Berlin, appears to be more necessary than ever. It has been celebrating tolerance and diversity since 1996. (02.06.2017)