Capturing America′s soul on camera | World | Breaking news and perspectives from around the globe | DW | 06.11.2012

What is it that constitutes the cultural DNA of America? That was the question award-winning photographer Arthur Grace asked when he put together a book of his work spanning almost four decades, 'America 101.' 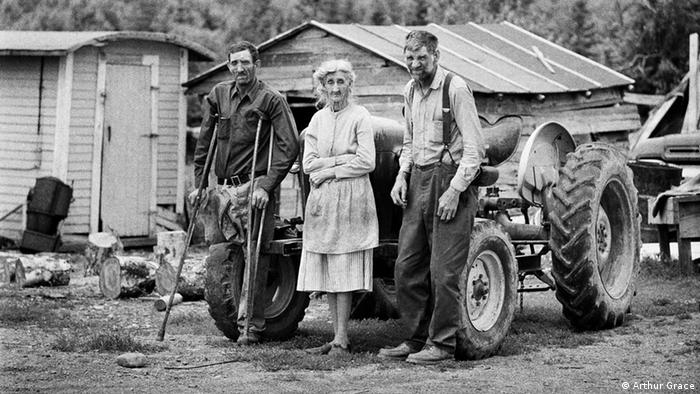 DW: How did you go about selecting the photographs for your book 'America 101,' a collection of four decades of your work?

Arthur Grace: I was talking to [Magnum photographer] Elliot Erwitt. He said the best thing for any photographer to do is to go back to the beginning of your career and mine your archive, meaning go through your pictures, find the ones that mean something to you, find the ones that you missed and work your way forward. As I found myself with a little bit of time, I had this concept for several years of how the work fits together, and I've spent so much time covering America over the years that I thought there was some kind of basic framework here that would represent and define us as Americans.

There are many photographs in the book that show we have the same problems today. Nuclear power, shortage of gasoline, energy, racial tensions, things are actually worse today then they were then. Celebrity and the pursuit of money, and people [seeking] attention were certainly around in the 70s, and have gone to new heights at this point. When I had the time to look back, these are the chapter headings that I came up with - what really is representative of us as Americans. 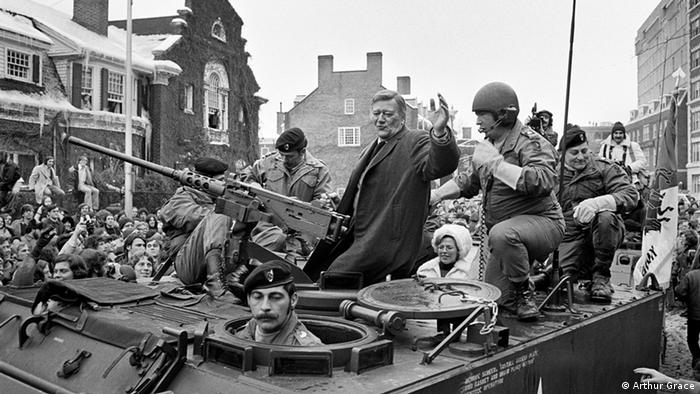 One would be patriotism and the flag. We're a very patriotic country; the flag is everywhere. Guns and violence is another category that fits this country. We're competitive - we're incredibly competitive. "USA, USA, we're number one" - I'm sure people around the world have heard that chant before.

Democracy, having a democracy and free elections, something this country was founded upon. Freedom, our constitution, freedom of assembly, freedom of speech, freedom of religion - those types of pictures belonged in the book.

What is it about a particular picture that you feel makes it quintessentially American?

Besides the dress and the location, it's something that's kind of in the DNA of the country. For instance, there's a photograph of all these men on the hood of their cars at night for a demolition derby. You can see it's a muddy field. You see these old American beat-up cars, and you see these guys who look American - work boots and jeans. It just has that elemental feel that's got to be the United States. And it was - a demolition derby at a state fair. 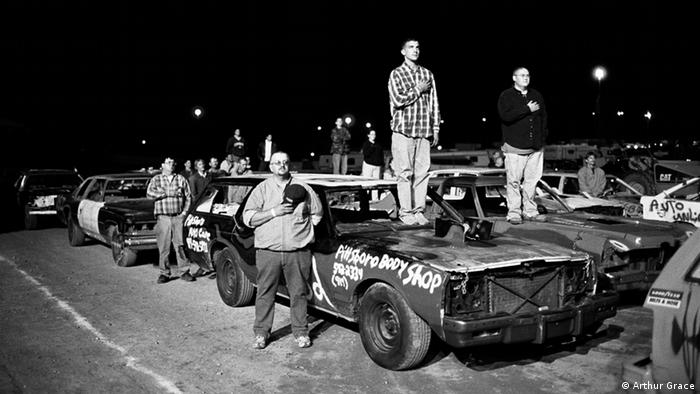 Everybody was walking around getting their cars ready as darkness fell. Then they played the national anthem and all of these drivers all of a sudden jumped on the hood or the roof of their cars and stood at attention and put their hands on their heart out of respect for the national anthem. A picture like that is unmistakably American.

Which would you say is your favorite photo in the collection?

If I had to choose a photograph that I relate to, it was the potato farmers, the Hatt family, which is a portrait I took of these three people in front of their tractor in rural Maine. That was one of those magical moments as a photojournalist where you're seeking to have the photograph tell the story, and everything came together.

The New York Times had sent a reporter to that area, which is in the middle of nowhere near the Canadian border, and he came back and there was no art work, meaning photographs, to go with the story. The picture desk called me and said, "You've got to leave right away, right away. You're just going to have to find somebody to photograph."

So I drove six hours. I got up there at 11:00. I checked into a motel. I got up at dawn and I'm literally driving down these rural roads looking for anything, anybody that fit the story. I had to be back in Boston at the end of the day to ship the film by 6 p.m. It was one o'clock and I didn't have anything yet, and I was panicked. I'm whipping down a road at 70, 75 miles an hour and I pass this rickety shack of a farmhouse, and just as I'm whizzing by I see a white-haired lady. I slammed on the brakes, did a U-turn, zoomed back. 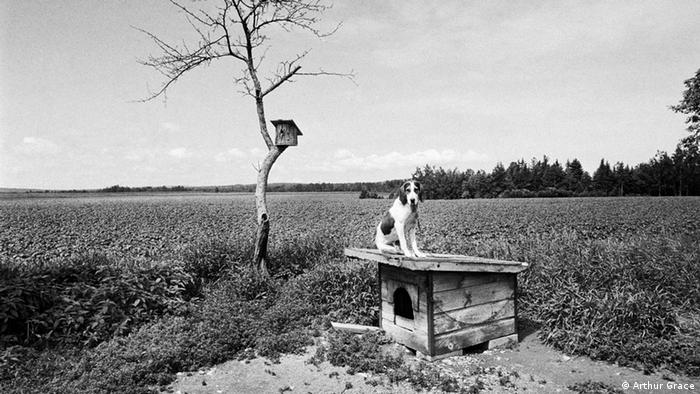 "Excuse me, I'm with The New York Times." I explain the story, I said, "Are you a potato farmer?" At that point her son came out, the person on the right side of the frame. She said, "Yes, we are." I said, "Can I take your portrait for this story? It's about the difficult times that potato farmers are having in Maine. Is that OK?" "She said, "Oh, that's absolutely fine." They looked stunningly American, exactly what you'd expect to see - hard-working people who were not doing well financially, obviously. We start, and she said, "Do you mind if my other son is in the picture?" Out came the other son, who was on crutches and had one leg. I put them in front of the tractor to make the one image tell the story.

They ran it huge in the paper and they nominated it for the Pulitzer Prize that year in feature photography. That picture resonates with me to this day - the truth of the picture, how evocative it was. For me, that's all you can ask. That you did it right and captured something that was real and people relate to it at the time, and years later.

You have followed many presidential campaigns; presumably you've also been following this one. How do you find it compares with the ones you've photographed?

From a photographer's point of view, visually, the problem has always been access. You don't get near them anymore. You get little chunks of time. But when I was there in 1988, it was the last time that anybody had the kind of access I had. At the beginning of the campaign [of incumbent President George H.W. Bush], everybody agreed that I could be there, and the doors opened. I literally had the chance to be with them night and day. I was very unobtrusive, and it worked out.

Since then, the door has been shut in each and every succeeding administration, meaning more pool photographs. One photographer represents all the agencies or all the magazines and newspapers. There's limited access.

What do you think that says about how the presidency has evolved over the last 50 years or so?

There's a photograph at the [1988 Republican] convention, there's a big crowd on the floor of delegates and huge screens with George Bush on them and if you look down, there's a little man at a podium, and that's George Bush, and that's the distance that has evolved in the presidency. 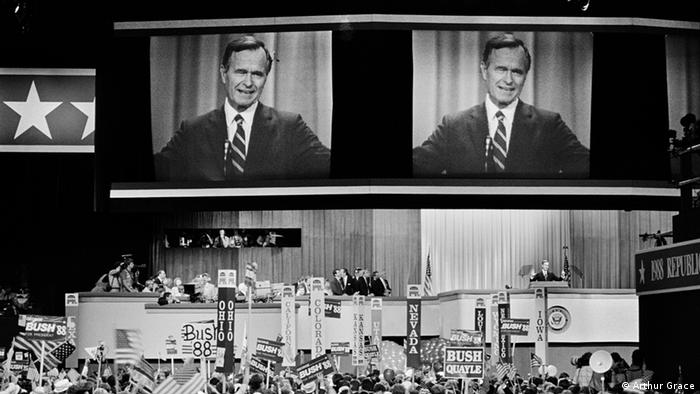 Everything's a photo op. There doesn't seem to be any real retail politics, where they go out and discuss in front of the people. Everything is totally stage-managed, so that they don't blow it, they don't say something. Right now, for instance, Romney hasn't taken a question from the press in three weeks. This was unheard of 20 years ago.

Arthur Grace began his professional career as a press photographer in 1973 for United Press International. Since then his work has appeared in major newspapers and magazines, including Time, Newsweek, Life and Stern. He has covered four US presidential campaigns. 'America 101' was published this year by Fall Line Press.

Listen to the interview with Arthur Grace