Canada has announced a new bill that would make it a crime to call for a terrorist attack and give new powers to the government's spy agency. The legislation comes in direct response to last year's attacks in Ottawa. 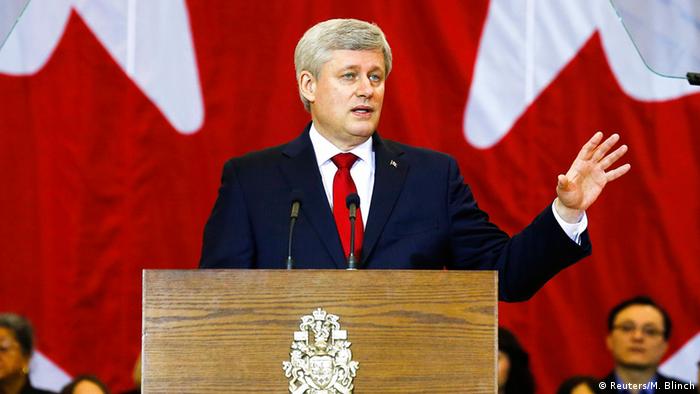 The new bill introduced by the Conservative Party government on Friday would criminalize calls for a terrorist attack on Canada in general, even if there is no specific threat. Another main provision of the new bill is to expand the powers of the Canadian Security Intelligence Service (CSIS).

The CSIS would have the ability to disrupt attacks by interfering with the travel plans or communications of terror suspects. In the past, Canada's spy agency was limited to the collection of intelligence. The new legislation also aims at lengthening the period of preventive arrest for anyone suspected of being involved in a terror plot from three to seven days.

Work on the new legislation began in October 2014 after a gunman killed a soldier at Canada's national war memorial and then stormed the parliament building in Ottawa. The attack came two days after a man, said to be inspired by the jihadist group "Islamic State," ran over two soldiers in a parking lot in Quebec.

Prime Minister Stephen Harper (photo) also cited recent attacks in France and Australia as justification for the moves. He said jihadists had declared war on Canada and it would be a grave mistake to ignore their threats. "Over the last few years a great evil has been descending upon our world, an evil that has been growing more and more powerful, violent jihadism," he added.

Harper's Conservative government has a majority of seats in the Canadian Parliament, so the new law is very likely to be passed.

The British Columbian Civil Liberties Association criticized the new bill. "Criminalizing people's words and thoughts is misguided and won't make Canadians any safer," said the organization's policy director Michael Vonn. "We will be less free, less democratic and less likely to know who to keep an eye on."