The budget minister in Canadian Prime Minister Justin Trudeau's Cabinet has resigned in an escalating political scandal. Jane Philpott said she had lost confidence in the government over its handling of a graft case. 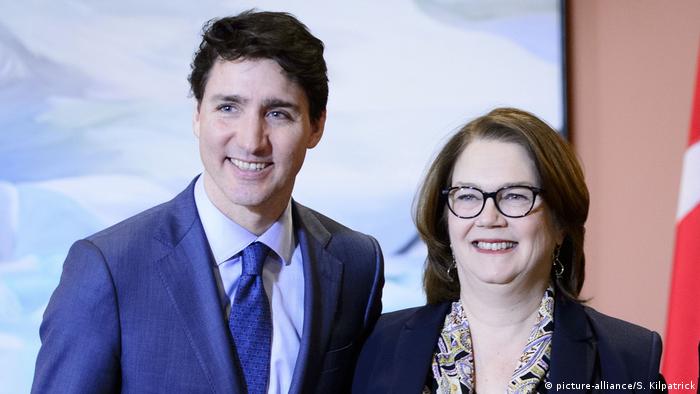 In a resignation letter addressed to the prime minister, Philpott said she was seriously concerned by efforts by politicians and officials to pressure former Attorney General Jody Wilson-Raybould to intervene in a criminal case against Canadian engineering giant SNC-Lavalin and could no longer defend the government.

"Sadly, I have lost confidence in how the government has dealt with this matter and how it responded to the issues raised," Philpott said in a statement.

"I must abide by my core values, my ethical responsibilities and constitutional obligations. There can be a cost to acting on one's principles, but there is a bigger cost to abandoning them," she wrote.

Wilson-Raybould, a close friend of Philpott, resigned in February after being demoted the previous month. She told a parliamentary hearing last week that she had faced pressure from Trudeau and senior members of his government to avoid a criminal trial in the case of SNC-Lavalin.

The company is facing allegations that it bribed Libyan government officials between 2001 and 2011, when the country was ruled by Muammar Gadhafi. It has heavily lobbied the government to settle the case out of court, arguing those responsible had since left.

If it received a criminal conviction, the Montreal-based corporation would be banned from any federal government business for a decade. The company is a major economic force with about 9,000 employees in Canada and 50,000 worldwide.

Wilson-Raybould was convinced her refusal to help SNC-Lavalin was behind the demotion. She did not think the officials who contacted her had broken any laws, but called their efforts "inappropriate."

Philpott, a physician considered a star in Trudeau's cabinet, had previously served as minister of health and minister of indigenous services. She was appointed to the powerful budget position in January.

At a Liberal party rally in Toronto, Trudeau said he was taking Philpott's concerns seriously.

"I know Philpott has felt this way for some time. And while I am disappointed, I understand her decision to step down. I want to thank her for her service," Trudeau said.

"But at the same time, we need to keep in mind the bigger picture," Trudeau said.

Trudeau has acknowledged raising the SNC-Lavalin issue with Wilson-Raybould, but has defended his actions as appropriate.This week, former top Trudeau aide Gerald Butts, who Wilson-Raybould said tried particularly hard to change her mind on SNC-Lavalin and who resigned from his position last month, is due to testify in front of a Parliament justice committee.

The civil war that brought down Libyan dictator Moammar Gadhafi allowed the country's women to carve out niches for themselves in public life. Now they are being squeezed out and even killed. (12.12.2018)