Can Bulgaria restore trust in politics? | Europe | News and current affairs from around the continent | DW | 13.03.2013

Can Bulgaria restore trust in politics?

Mass protests of Bulgarians forced the last government to resign. A new caretaker government now has to prepare early parliamentary elections on May 12. But many Bulgarians have lost faith in politics altogether. 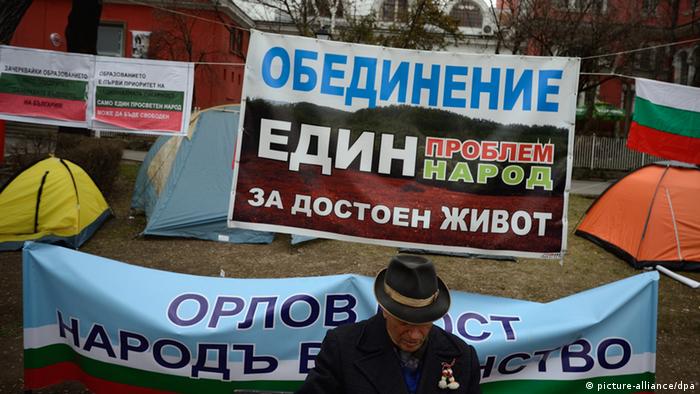 Unrelated as the cases may be, self-immolations have become a mark of the ongoing mass protests in Bulgaria: on Wednesday (13.03.2013), a fourth man in Bulgaria doused himself with petrol and set himself ablaze. The 51-year-old was hospitalized in the capital Sofia, and he was still in critical condition on Wednesday afternoon. Three other men have already died after setting themselves ablaze since protests began in the country less than two months ago. 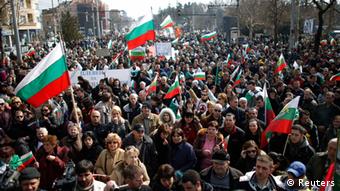 What started off as civil demonstrations against abnormally high electricity and heating bills and the power of alleged monopolists which dominate the energy market has since turned into a mass movement against the system. Demonstrators in Bulgaria today call for a system change and a thorough investigation into the transition period after the Communist rulers were toppled in 1989 and 1990.

Demands by "the street" - as the protests are called in Bulgaria - are varied and sometimes contradict themselves. Banners have read anything from: "All post-transition politicians go to jail!," "Stop privatization and make energy companies public," to "New constitution now!" and "Let's leave the EU!"

Demonstrators do agree, however, when it comes to rejecting all the existing political parties. They also share a feeling that injustice is widespread in Bulgaria. Bulgarian ombudsman, Konstantin Pentchev, who enjoys high respect in the country, sums it up this way: "It was the lack of justice that drove people out onto the streets. Most people who come to me for help don't complain because we're the poorest country in Europe. They don't complain about the crisis, about unemployment, or because pensions have been frozen and energy bills are too high. No, the majority of them are angry because of a lack of justice and transparency."

Is poverty the main problem? 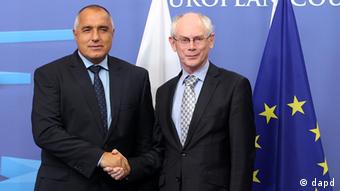 At the end of the day, however, that feeling is due to the country's widespread poverty, say observers. Many blame the path of austerity dictated by Brussels for the rising levels of poverty. The last government under Boiko Borissov and his center-right party GERB stuck firmly to that path and introduced all the required measures. The protests eventually forced the government to resign.

Borissov and his newly-founded party won the parliamentary elections in July 2009 by a landslide. Observers attribute the result not least to Borissov's charismatic appearance. A former firefighter, bodyguard and mayor of Bulgaria's capital Sofia, he simply appealed to voters.

But his cabinet didn't improve living conditions for Bulgarians. On Wednesday (13.03.2013), Parliament was dissolved and an interim technocrat government took office. It will run the country until early elections on May 12.

Bulgariaon the verge of bankruptcy?

But not everybody is convinced that Borissov's government really did cut as much as it said it did. Sociologist Andrey Raitchev is concerned that the worst is still to come: "I'd highly recommend that the interim government check state finances first. I don't think that it all looks rosy there. On the contrary: I wouldn't be surprised if the state was bankrupt."

The demonstrators have accused Borissov of taking money from the poor and spending it generously on other purposes. Whether protests will continue under the new interim government is not easy to say, says Regine Schubert, the head of the Sofia branch of the German Friedrich Ebert Foundation. "It's not the interim government; it's rather the next regularly elected government that will face a big challenge, one that currently seems to be an unsolvable task: it will have to restore the population's trust in politics."

The demonstrators claim that all governments since the fall of the Communist regime more than 20 years ago have been corrupt and have abused their power to line their own pockets. Many of the protesters question the legitimacy of all political parties and call for more power for the citizens to monitor government activities. Political scientist Ogninan Mintchev expects political parties to react to that call: "Over the next two months leading up to the elections I expect all parties to take on new roles. Until now, they have defended the status quo. But now they're likely to fight against it because that's the only way they'll get voters' support." 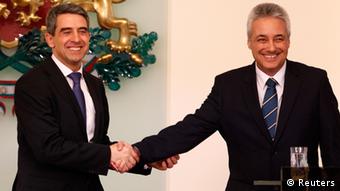 The interim government's most important task will consist of preparing orderly, fair and transparent elections on May 12. Sociologist Peter-Emil Mitev adds: "They'll have to have tough negotiations with the demonstrators. The people are feeling bitter and angry."

The new interim government can bank on two beacons of sympathy when they take up talks with the protesters: the new sports minister is a famous world swimming champion; and the culture ministry is now headed by a TV star.

But talking to the protest movement will not be easy for two reasons. Protesters have so far failed to organize themselves properly. And those who have spoken out in the movement's name have already said they're expecting the upcoming elections to be unfair and not legitimate.

If the protesters want to have their demands heard, however, they will have to channel their current power in time for elections. The latest polls suggest that Borissov's party GERB currently has a narrow lead over the Socialist party. The small party of the Turkish minority in Bulgaria will probably also make it into parliament, and the Liberal-Conservatives under former EU Commissioner Meglena Kuneva also stand a small chance.

Bulgaria's government throws in the towel

High electricity bills were the trigger for the protests, but the real reason was the disappointment of the people at the lack of economic progress. (21.02.2013)

Germany remains opposed to Romania and Bulgaria joining the European open-border Schengen area. Critics say it is an attempt to stop Roma from those countries from making their way to the West. (07.03.2013)

EU poverty 'eating into the heart of society'

The amount of food aid distributed to people in Europe by the Red Cross has reached levels not seen since World War II. The economic crisis is putting millions at risk of poverty. Bulgaria and Spain are most affected. (13.03.2013)