The lawyer and chairman of the International Anti-Corruption Conference council says it is time for a change of government and that there must be a zero tolerance policy towards corruption. 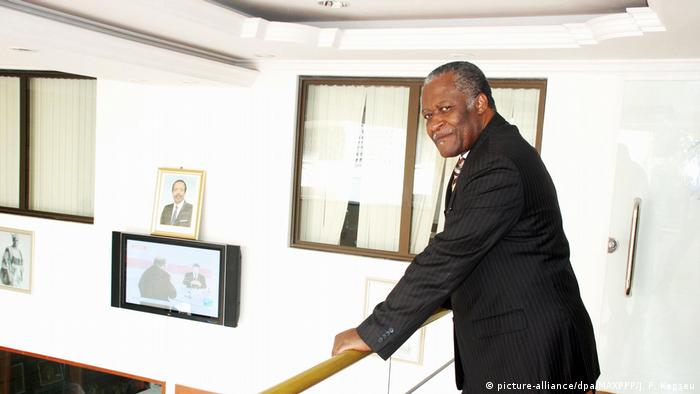 On October 18, Cameroonians will head to the polls to vote in the first presidential election since 2011. Lawyer Akere Muna wants to see an end to the 36-year-rule of incumbent President Paul Biya, He spoke to DW about his desire to bring to an end rampant corruption with which he says the present government is riddled.

DW: What makes you so sure you can become the president of Cameroon?

Akere Muna: Because I think I know what irks this country. I know the misery they're in. I know that this is a country where 40 percent of the people are below the poverty line. I know what's been happening in the north and south-west — because I'm from there. I know exactly what it is to be an Anglophone in this country. But I'm saying that we don't want to change the country, we want to change the government. And that's my message. We have a huge governance problem linked to corruption and all that goes with it for the past 25 years.

But if the system remains as it is, how will you become president?

Under my government, there will be zero tolerance for corruption. Absolutely zero tolerance. This country is tailor made for any kind of corrupt practice. The World Bank report on public expenses in Cameroon says so. The report says that Cameroonian civil servants don't live off their salaries. They live from a system where they have put toll gates everywhere and they collect money. So we have a corrupt system that must be fixed.

How will you fix it if the system is so corrupt?

The system is well implanted because the government's system of fighting corruption is to expect the fish to fry themselves. It doesn't work.  You cannot get people who are thieves to watch over thieves. Cameroon has been 'zombiefied'. Cameroonians arrest a minister and he produces 1.7 billion CFA (€2,6 million, $2.9 million). Nobody is scandalized. We have all been zombiefied to the point where we are numb. We think everything is normal. That is the saddest fact. Government action should be to benefit Cameroonians, not to punish them, not to allow them to languish in misery.

Your critics think that you are talking a lot but you could have done more because you have worked in organizations outside Cameroon where you could have helped Cameroonians.

The first thing I did when I decided to work for Cameroon was to start the chapter of Transparency International. You know what it cost me? I was styled as [a member of] the opposition, somebody who was not patriotic and the clients from abroad who came to work with me were told that I was an opposition lawyer and they left. I lost 80 percent of my work because of that. When I was the head of the African Peer Review Mechanism (APRM) I pushed for us to start the process; we are members since 2004, founding members, but we hadn't even started the first stage of the review process. It has to do only with governance. So what do you want me to do? We have a government which closes its eyes so it cannot hear and closes its ears so it cannot see. And that's a crazy way to behave.

What about all the money that is stashed in foreign banks. If you are elected president, how will you go about getting this money back?

For the past five years I have been in a committee chaired by Thabo Mbeki on illicit financial flows. And I made a proposal which was adopted by the heads of state of the African Union (AU). I proposed that all the money which is found in foreign banks which is frozen should be transferred to the African Development Bank (AfDB). Because those banks that are keeping that money are complicit with the kleptocrats who stole the money from Africa, because they knew that they would take this money illegally and they took it. So they're handling stolen goods. So my proposal was that we should fight to ensure that all that money is put into a holding account so that when they decide whose money it is, it is sent back. That was my proposal and the AU adopted it. In this country, I did everything wi th Transparency International for us to have a framework law that covers everything about corruption so we can fight corruption with the law. All they did was make a court, but the law is still not clear in different areas. CONAC (Cameroon's National Anti-Corruption Commission) should be more powerful and be able to investigate and prosecute. They cannot just write a report to the presidency, which gives a political twist to the process.

So what is your mission and objective?

Government action must have the interests of the people at its heart. In this country we must have justice for all, health for all and education for all.

This interview was conducted by Moki Edwin Kindzeka. It has been edited and condensed for clarity.

The US ambassador to Cameroon has accused government forces of abuses in the fight against Anglophone separatists. Militants in the mainly French-speaking nation are seeking independence for two English-speaking regions. (18.05.2018)