The activists were arrested in 2017 for their alleged roles in an Anglophone secessionist movement. Cameroon's English-speaking minority has long complained of discrimination at the hands of the Francophone government. 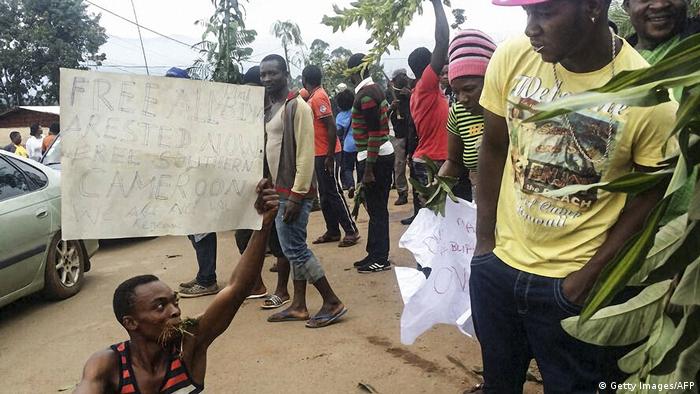 A court in Cameroon has sentenced seven activists from the country's Anglophone minority to 10 to 15 years in jail on terrorism and rebellion charges, a defense lawyer said on Friday.

Among those charged was Mancho Bibixy, a radio presenter in the English-speaking Northwest Region. Bibixy was handed a 15-year prison term for "acts of terrorism, hostility against the homeland, secession, revolution and insurrection."

Bibixy and fellow activists were arrested last year as part of a crackdown on an Anglophone independence movement by President Paul Biya's French-speaking government.

Bibixy's lawyer, Claude Assira, said the convictions "would only worsen the... Anglophone crisis."

The convictions come a week after the US ambassador to Cameroon, Peter Barlerin, accused government forces of "targeted killings, arson and looting" in the fight against Anglophone separatists. He called for a dialogue to end the 18-month separatist crisis in the country's English-speaking regions.

The Cameroonian government summoned Barlerin earlier this week to protest his remarks.

Cameroon's English-speaking population has long complained of discrimination in the majority French-speaking country.

In 2016, English-speaking teachers and lawyers in the two main English-speaking provinces — the northwest and the southwest — launched a peaceful movement to demand for reforms and greater autonomy.

The separatists want to turn the provinces into an independent nation named Ambazonia. They even declared independence in October 2017 after President Biya rejected demands for greater autonomy.