Cameron makes case for UK airstrikes against ′IS′ | Europe| News and current affairs from around the continent | DW | 26.11.2015

Cameron makes case for UK airstrikes against 'IS'

British Prime Minister David Cameron wants lawmakers to approve airstrikes against 'IS' militants in Syria, reports Samira Shackle from London, and the chances are good that he will get a majority in favor. 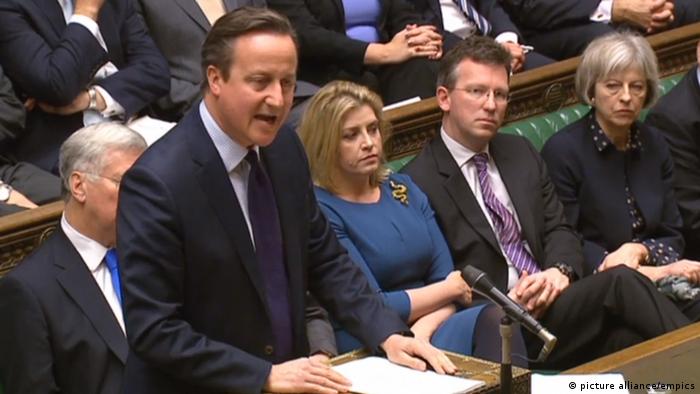 David Cameron has urged MPs to back UK airstrikes against the self-styled "Islamic State" (IS) in Syria. In a speech to the House of Commons, almost a fortnight after terror attacks in Paris killed 130 people, Cameron said that the terrorist organization is using its safe havens in northern Syria to launch plots against Britain. All seven foiled attacks in Britain this year were either plotted by ISIL or inspired by its propaganda, he said, using one of the alternate acronyms for IS.

Ahead of the speech, Cameron published his written statement to the Foreign Affairs Select Committee. In it, he said: "The longer ISIL [IS] is allowed to grow in Syria, the greater the threat it will pose. It is wrong for the United Kingdom to subcontract its security to other countries, and to expect the aircrews of other nations to carry the burdens and the risks of striking ISIL in Syria to stop terrorism here in Britain."

The issue poses a major political challenge for Cameron. He leads a very small Conservative majority in the Commons, and will need to convince a significant number of MPs from other parties to offset any Conservative rebels. It is predicted that around 15 Conservatives might vote against airstrikes. 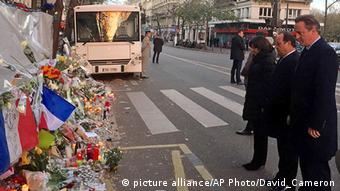 Cameron (r.) and French President Hollande paid their respects at the Bataclan bombing site in Paris

On the other side of the aisle, Labour leader Jeremy Corbyn, until recently chair of the Stop the War Coalition, opposes intervention, but he is under pressure to allow his MPs a free vote. If Corbyn decides to impose an anti-intervention line, it is likely to lead to high-profile, frontbench resignations.

There is significant support for bombing Syria among MPs; most political commentators expect that Cameron would be able to win a majority. Crispin Blunt, the chairman of the influential Commons Foreign Affairs Committee, earlier this week issued a warning to wavering MPs that there could not be "a clearer necessity for using force." It is thought that around 70 Labour MPs could vote in favor of airstrikes.

Tom Tugendhat, Conservative MP and former British army officer, sums up the view shared by many: "This is not a group that can be negotiated with, or pacified. It is a jihadist cult that claims legitimacy from the divine, not the human, and for which every success is an encouragement to greater crime. That is why we must stand with our allies today in taking on Daesh [IS]. We have a duty not only to face the reality that when our closest ally is attacked it is an attack on us, but that our response is essential. Reversing their successes, showing them that they can, and will, be defeated is part of our message to those who would join them."

Experts advise caution. "While the Paris attacks have demonstrated the need for action against ISIS, as the prime minister acknowledges, airstrikes alone cannot defeat the group," says Dr Simon Mabon, lecturer in international relations at Lancaster Unversity. "A more comprehensive plan is needed to move beyond the stalemate in Iraq and Syria, which involves diplomatic solutions that bring long-standing rivals - including the US and Russia, and Saudi Arabia and Iran - together." 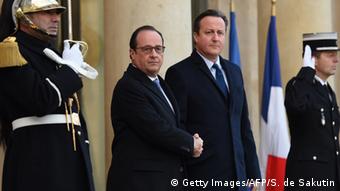 Cameron is particularly wary because he faced an embarrassing defeat in the Commons in 2013 when he tried to rally support for airstrikes in Syria against President Bashar al-Assad. He has said he will only hold a vote on the current plans if there appears to be significant parliamentary support, as another defeat would be a public relations victory for ISIS.

There is certainly some skepticism over his shift in position. "Cameron has made a let's-bomb-Syria statement today, which is meant to show that he is serious and thoughtful about military interventions," says Freddy Gray, deputy editor of Spectator magazine. "In fact he makes rather too much of not making this decision lightly, which rather suggests he knows that he is winging it. How can anyone take him seriously when he is proposing effectively an alliance with the side he wanted to attack two years ago, because it just felt like the right thing to do? He has been terribly wrong on Libya, terribly wrong on Syria, terribly wrong on Iraq and Afghanistan. Why should we believe in his foreign policy judgment now?"

Cameron claims that airstrikes will serve Britain's "national interest," but Corbyn and other opponents of intervention have questioned whether action could actually worsen the threat to Britain. There is also the question of post-war planning and collateral damage. "It appears that the government has not learnt the lessons from the Iraq war, with no clear plan for what happens after the airstrikes," says Mabon. "Moreover, given Raqqa's population of around 500,000, civilian casualties are all but inevitable, leading to more turmoil, more fragmentation, more displacements and refugees and ultimately, a more fertile breeding ground for ISIS."