A US firm found oil in the southeast Asian nation's waters back in 2004. But years of delays mean productions only kicked off on Monday. The government hopes to make an initial $500 million (€400 million) in revenues. 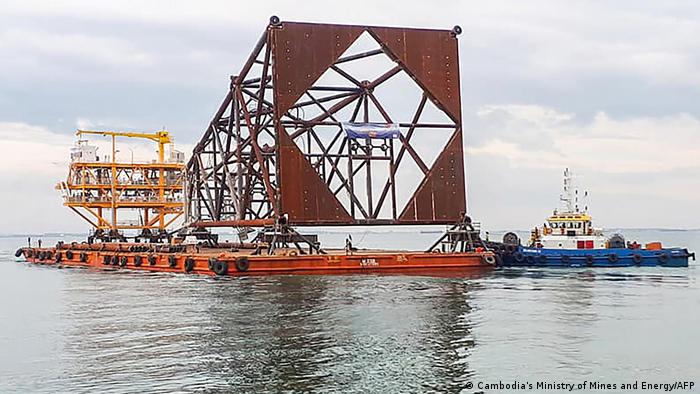 An offshore oil platform under construction off the Cambodian coast

"The year 2021 is coming and we have received a huge gift for our nation — the first oil production in our territory," he wrote on social media.

"This is the significant step for Cambodia to build national capacity and the oil, gas and energy industries.

Key benefits include national budget revenue, economic benefits from the diversification of the oil industry and national capacity building in this sector," he added.

How siginficant are Cambodia's oil reserves?

The crude was taken from an area 160 kilometres off the southwestern coast of Sihanoukville.

The Gulf of Thailand boasts significant oil deposits, with US oil giant Chevron first having found proven reserves off Cambodia in 2004.

But production stalled as the government and the the company failed to reach a revenue-sharing agreement, leading the firm to sell its stake to Singapore’s KrisEnergy in 2014.

Chevron’s discovery of the reserves led the kingdom to be feted as the region’s next potential petro-state.

The governmentestimates hundreds of millions of barrels of crude are beneath its waters.

KrisEnergy currently holds a 95 stake of the block where the oil was taken from, while the government holds the rest.

The company expects a peak production rate of 7,500 barrels a day from an initial phase — a modest amount compared with Cambodia’s oil-producing neighbours Vietnam and Thailand.

But the revenues could be significant for the government, which forecast in 2017 that it would make at least $500 million (€400 million) in royalties and taxes from the first phase of the project.

Cambodia has struggled to develop its oil fields as few companies were willing to invest in the area following a global oil price slump in 2014.

China's funding of the redevelopment of a Cambodian naval base is raising concerns about its military footprint in the South China Sea. But analysts say the project remains small.