Cambodia raises minimum wage for textile workers | Asia | An in-depth look at news from across the continent | DW | 29.09.2016

The government has hailed a deal to raise wages for the country's estimated 700,000 garment workers. But some union representatives have criticized the latest raise, saying it falls short of a fair minimum wage. 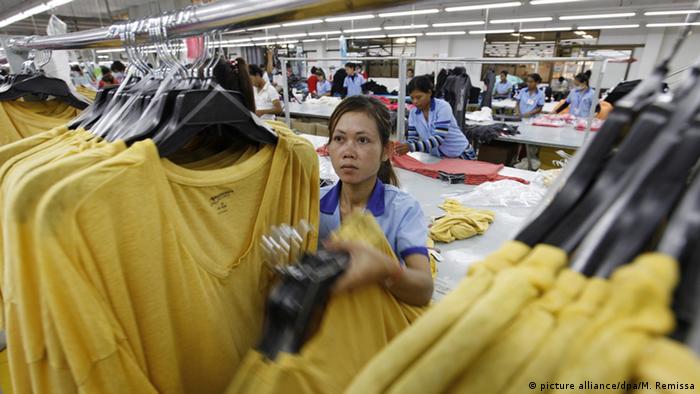 Forced overtime, discrimination and anti-union practices - a new report accuses Cambodia of failing to protect workers in the garment industry, and calls on apparel brands to disclose suppliers. DW examines the issue.

Garment industry representatives, unions and the government agreed to raising wages for garment workers by 9.2 percent by the beginning of next year, Cambodia's Ministry of Labor, Vocational and Training said on Thursday.

"The minimum wage of garment factory workers for 2017 has been officially set at $153 (136 euros) per month," the ministry said in a statement.

However, some union representatives said the latest increase of $13 monthly, compared to $140 in 2014, fell drastically short of a fair minimum wage.

"All the workers' union leaders and I, myself, are not happy with this new increased wage," said Ath Thorn, president of one of the unions that took part in negotiations.

"Due to the general expenses of the workers being too high, especially the prices of goods that keep increasing day by day, I think the fair minimum wage for the workers should $171 per month," he added.

Garment workers' wages have been a headache for Cambodia's government since mass demonstrations four years ago.

In 2014, police opened fire on textile workers protesting for an increase to their then-monthly wages of $80, killing at least four people and injuring dozens more in the nation's capital of Phnom Penh.

Following the incident, the government raised the minimum wage to $100 per month for the rest of the year.

In 2015, Human Rights Watch called on the government to enforce adequate protection of the estimated 700,000 workers in the industry, the majority of them women.

The human rights watchdog issued a report with testimonies of laborers reporting horrendous working conditions, including abuse and sexual harassment.

Germany is relatively new to the list of countries with a minimum wage. Now, government coalition talks are considering raising it without using the country's independent expert commission. There are pros and cons.

Fast fashion has radically transformed the textile industry. These days, 56 million tons of clothing are sold every year.