Whether it's copper, tungsten or oil, industrial raw materials are becoming increasingly expensive. That's partly due to higher demand, but speculation is also driving prices up. 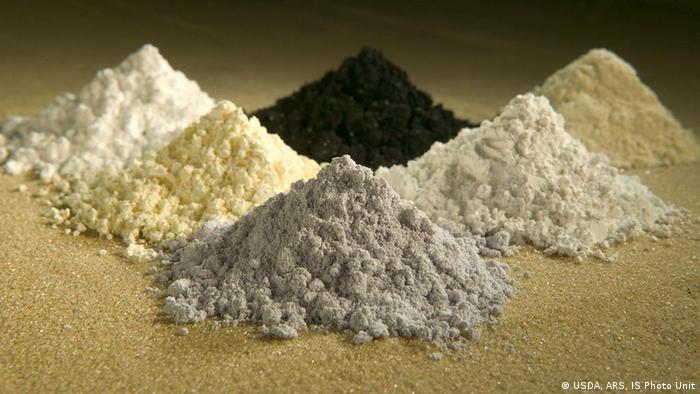 Thomas Bartelt heads Volkswagen's global financial risk management team. It's his job to ensure that the company can always get hold of reasonably-priced copper, aluminum, platinum, palladium and rhodium.

Bartelt says it's very important for Volkswagen to be able to plan ahead. "By using the futures markets, we can ensure that we know what a ton of aluminum is going to cost us in five years," he explains. "We do that through finance contracts, so-called derivatives."

Volkswagen does that for aluminum and copper. When it comes to the rare metals, it buys them directly and stores them. 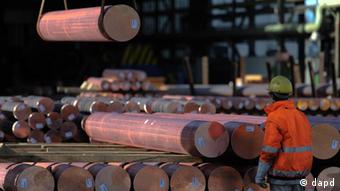 Many industrial processes would be impossible without copper

Bartelt works with banks and raw materials dealers, and he trades both within and outside the official exchanges. Investors do the same, only they're not planning to use the raw materials in manufacturing. In the late 1990s, some 20 percent of raw materials trading was speculative - now it's 80 percent. Raimund Röseler, who's in charge of bank oversight at the German finance regulator BaFin, finds that a worrying statistic.

The money invested in raw materials has risen from $26 billion (19.8 billion euros) in 2003 to $400 billion today. Röseler says it's not the banks which are driving the market; they're merely responding to the increasing demand from private and institutional investors.

"Indexed funds and certificates have experienced enormous increase in demand, and that's been accompanied by a massive enlargement of the raw materials futures market," he says.

Betting on the future

Röseler puts the current money out there in the form of open raw materials derivatives at $3,200 billion. These are essentially bets on what price copper, aluminum, wheat or oil will be available at and when. And while that has little to do with the genuine physical availability of the product, it does have an enormous influence on its price. When the product is agricultural, it can lead to hunger and poverty. When the product is a metal, it's the security of production processes which is under threat.

German Finance Minister Wolfgang Schäuble has raised doubts about the economic usefulness of this kind of trade. He says if this development continues, the next financial crisis is bound to come. 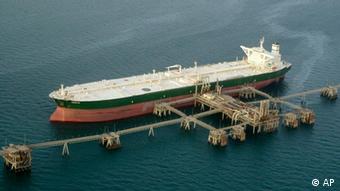 Oil is getting scarcer and more expensive

Schäuble supports the efforts of the G20, the group of the most important industrial and emerging economies, to regulate the raw materials market. The G20 wants to introduce a range of measures to fight market abuse and to improve the transparency of trading, both in raw materials themselves and in futures.

"We need regular reports on the market positions of all those involved," says Schäuble. "That means national regulators in all the G20 countries have to be given the right powers to do the job."

The regulators, says Schäuble, should have among their weapons the power to limit the exposure of individual traders in a futures market. With this provision, he's targeting the high-frequency traders whose computers can buy and sell papers in a matter of milliseconds on the basis of electronic information about the market. A register of trades done off the exchanges should make it clear who is trading what, and how much.

"If we have to trade on the exchanges, we'd have to put down cash. That's extremely hard for us in the industrial world, since we would be depriving ourselves of the liquidity we need for investment in new plant or in new technology," he says.

Bartelt wants the raw materials market to be handled with greater subtlety. The agricultural market is much more sensitive than the metals market, he says. One would understand if strict rules were imposed there. But in his field, one has to think about the consequences that regulation could have on the real economy.

The politicians are well aware of the problem. But Schäuble says it's hard to draw the line so that it doesn't affect industry. He's pushing for concrete steps and is getting "quite impatient." Compared to the problems in the international financial markets, he says, the raw materials market is still in its infancy, and the regulations have to come quickly. 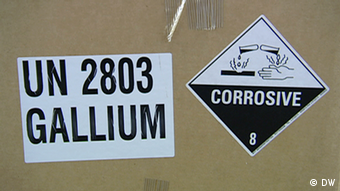 Rare metals like gallium are essential in the electronics industry

At the same time, the German government is itself thinking about how to ensure raw materials supplies for German industry. It signed agreements recently with Mongolia and Kazakhstan to set up raw materials partnerships based on the principal of "raw materials in exchange for industrial assistance." Exploration, extraction and treatment of raw materials would be done jointly, with the technical infrastructure coming from Germany.

But industry itself, which sees raw materials procurement as one of its greatest challenges, is not standing still. At the end of January, the Federation of German Industry (BDI) established an Alliance to Ensure Raw Materials, involving major companies like BASF, Daimler, Evonik and ThyssenKrupp.

The Alliance wants to participate in mining projects abroad to improve security of supply, especially for critical raw materials. Germany is almost completely dependent on imports for metals, including the so-called "rare earths."