Germany's central state of Hesse, which includes the financial hub Frankfurt, has a new government. It comprises conservative Christian Democrats and center-left Greens – a first for one of Germany's larger states. 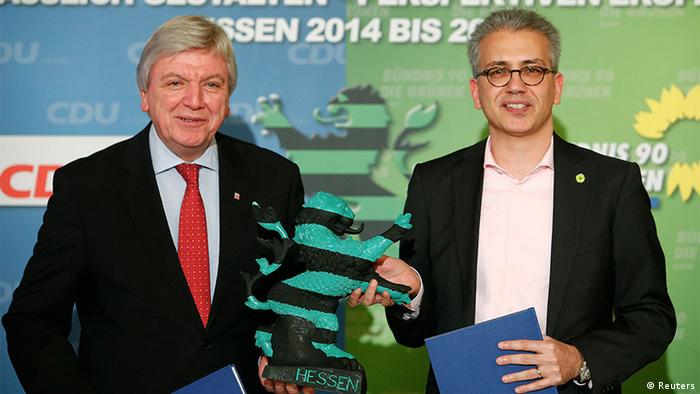 A conservative-Greens coalition cabinet was endorsed in the parliament of Germany's Hesse state on Saturday, four months after its regional election. A similar coalition in the city-state of Hamburg fell apart in 2010.

Hesse's conservative premier Volker Bouffier was re-elected to a second successive term, alongside 10 new ministers, by the assembly in Hesse's regional capital of Wiesbaden.

His cabinet received 62 votes in the 110-seat assembly – apparently with an additional vote from among the chamber's three opposition parties.

In an embarrassment for Wiesbaden assembly staff, Saturday's vote had to be re-run after three ballot papers were found to have incorrect details printed on them.

In Hesse, however, the region's Social Democrats led by Thorsten Schäfer-Gümbel remain in opposition.

After Saturday's vote, Schäfer-Gumbel said his regional SPD would be a "very determined" opposition.

Diverging coalition mixes are not unusual in Germany's federal matrix of national government and 16 regional states.

In the wake of Hesse's election, Bouffier had initially had a series of exploratory coalition talks with the opposition parties, including the regional SPD, the pro-business liberal Free Democrats (FDP) and the left-of-center party, the Linke or Left.

The FDP which had been Bouffier's coalition partner in Hesse's previous government and in Merkel's previous coalition cabinet at federal level lost cabinet office in both September polls.