The former US administration under George W. Bush should be made legally accountable for torture and abuse in Guantanamo, says the UN's special rapporteur on torture. But the new US president is unlikely to take action. 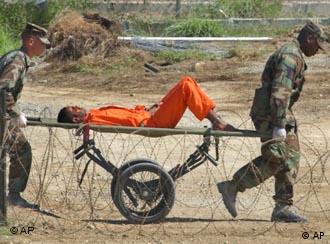 Who precisely is responsible for the treatment of detainees in Guantanamo?

Leading figures of the former US administration are responsible for the brutal interrogation methods and the inhumane treatment of prisoners in Guantanamo, said Manfred Nowak, the special rapporteur on torture at the UN Commission on Human Rights.

According to Nowak, charges should therefore be brought against former President George W. Bush and former defense secretary Donald Rumsfeld.

"The evidence is there," Nowak told the German TV news magazine Frontal21 in a report broadcast Tuesday evening, Jan. 20. "We have seen the documents that show that these interrogation methods were expressly ordered by Rumsfeld, but of course with the knowledge of the highest levels in the United States."

The new US President Barack Obama was obligated to pursue criminal prosecutions against Bush and Rumsfeld, Nowak said.

"There shouldn't be any beating around the bush here," he said. "This was torture."

Experts doubt that such high-ranking politicians would be put to trial for these allegations. It is more likely that the henchmen would be prosecuted, but not those politically responsible. 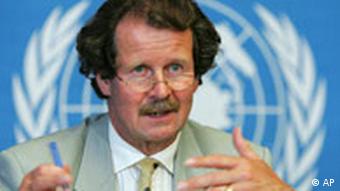 Manfred Nowak already reported on torture findings in Guantanamo in 2006

"It's ultimately a political question whether these people will be called to account, but legally it is a clear obligation by the US," Nowak said.

The US had ratified the UN Convention Against Torture and thus recognized it as binding, he said. The new administration therefore had to do everything in its power to ensure that those people accused of having tortured were brought to trial, he said.

But in an interview with ABC news' This Week earlier this month, Barack Obama said his administration would still have to evaluate how it will approach this issue.

"Obviously we're going to be looking at past practices and I don't believe that anybody is above the law," Obama said. "On the other hand, I also have a belief that we need to look forward as opposed to looking backwards. And my general belief is that when it comes to national security, what we have to focus on is getting things right in the future, as opposed looking at what we got wrong in the past."

As early as February 2006, Nowak published a report on Guantanamo on behalf of the UN, in which he accused the US of violating international human rights standards.

French, German and US human rights groups have previously said they wanted to bring legal action against Donald Rumsfeld.

Obama Becomes US President; Lays out Challenges Ahead

Barack Obama was inaugurated as the 44th President of the United States Tuesday, calling for his nation to unify and work together with the world at a time of crisis and upheaval in his historic address. (20.01.2009)

US President-elect Barack Obama says he'll close the Guantanamo detention facility, leading to questions about what to do with the inmates. France wants a common EU policy on released prisoners, but opinions differ. (26.12.2008)

On the 20th anniversary of the arrival of the US' first detainees at Guantanamo Bay, DW spoke about the situation with a human rights expert as well as the man tasked with closing the prison back in 2013.