Bundesliga: Wolfsburg and Gladbach keep pace at top with wins

In Sunday's late match Gladbach made quick work of Hannover. Earlier, Wolfsburg solidified their status as second-best with a victory over Freiburg. The match was closer than the 3-0 scoreline suggested. 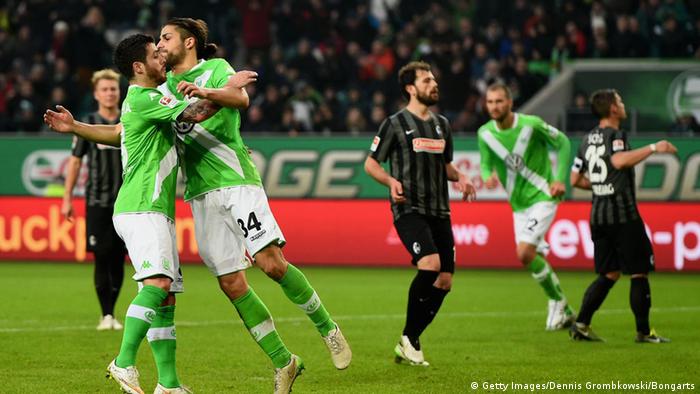 The second-placed Wolves came into the match on the back of a rare loss, while second-from-bottom Freiburg were seeking a win to lift themselves out of the drop zone.

Hosts Wolfsburg were all over their guests right from the opening whistle, with midfield talisman Kevin de Bruyne proving a particular headache. So it was no surprise in minute 20 that the Belgian got on the score sheet after cutting from the left into the middle of the pitch and besting Freiburg keeper Roman Bürki.

Wolfsburg looked likely to extend their lead but wasted their chances. Freiburg almost made them pay, drawing a fine save from Wolves keeper Diego Benaglio in minute 38.

The hosts came out of the dressing rooms looking for a second goal, with Vieirinha going centimeters wide in the forty-eighth minute. Freiburg sensed that a point was within the realm of possibility and gradually earned a slight advantage in possession. But attack has been Freiburg's Achilles' heel this season - the team had failed to score in ten matches, and Benaglio was left in peace to contemplate the universe.

The decider came in minute 78, when de Bruyne was sent through and brought down by an onrushing Bürki in the area. Ricardo Rodriguez converted from the spot. And seven minutes later, de Bruyne squared the ball for substitute Maxi Arnold to slot home.

The 3-0 win means that the Wolves keep pace with Bayern at the top of the table and Freiburg remain in the bottom three. 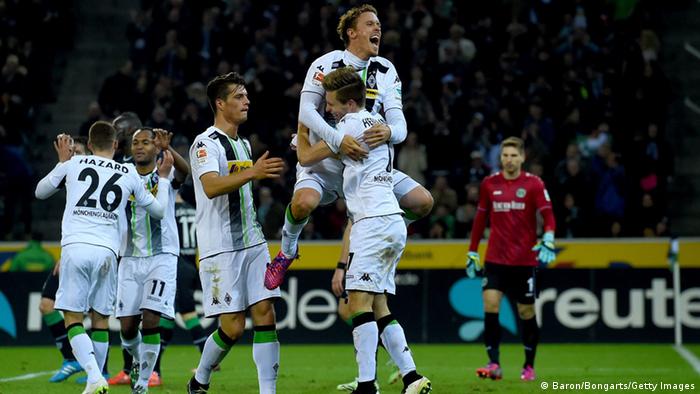 In Sunday's late match, hosts Mönchengladbach were trying to reclaim third place against Hannover and their embattled coach Tayfun Korkut, who had yet to win in 2015.

The first half was a one-way street with the Foals attacking and Hannover content to defend. More than 70 percent possession did the hosts no good, though, as they failed to find the final pass or the on-target shot.

Until minute 43. Max Kruse located Thorgan Hazard with a lateral pass that cleared the entire central defense. Hannover failed to deal with the Belgian's long diagonal cross, and Patrick Herrmann snuck in at the far post to nudge the ball into the net.

After the break, Hannover were a bit more active, but could only generate a single shot on goal. Gladbach had a golden opportunity to double their advantage in minute 67, but Ron-Robert Zieler parried Herrmann's effort from point-blank range.

But a quarter of an hour from time, Zieler was powerless to prevent Kruse from picking out Herrmann in acres of space. Herrmann will have thanked his providers for serving him up a very easy brace.

The 2-0 win sees Gladbach reclaiming the final automatic Champions League spot from Leverkusen, while Hannover are the second-worst team of the second half of the season and continue to slide in the table.

Hamburg have too much aggression, Dortmund seem to have lost theirs, while Bayern don't need any. Those are the lessons DW Sports' Jefferson Chase draws from Matchday 25. (15.03.2015)

Werder Bremen were hoping for a return to the days when their clashes were Bayern were the premier ties in the Bundesliga. It wasn't to be, as Munich handed them a 4-0 thrashing. (14.03.2015)