With a number of the top clubs having tired legs after midweek German Cup games, the stage was set for some upsets. But the leading sides got the job done, led by Bayern, yet Borussia Dortmund lost again. 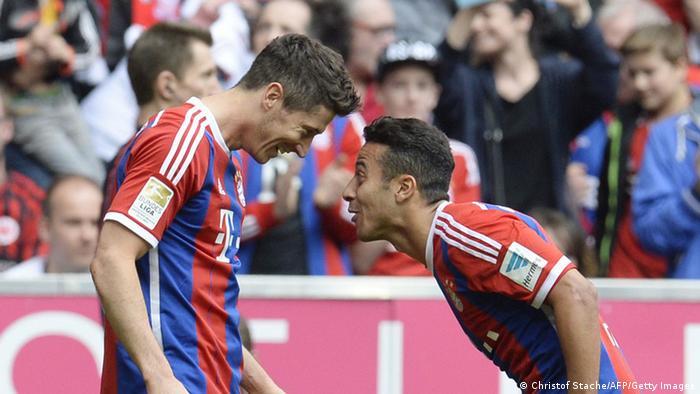 Bayern Munich's bench made for a somewhat desolate sight, as Pep Guardiola had to make do with only four substitutes; one of whom was goalkeeper Manuel Neuer. There was a raft of injuries, affecting everyone from David Alaba to Arjen Robben, as well as, the desire to rest players like Jerome Boateng ahead of Wednesday's Champions League match against Porto.

But anyone who thought that would give opponents Frankfurt a chance was sadly mistaken. Bayern controlled the game from the get-go and took the lead after a quarter of an hour.

Robert Lewandowski showed exquisite control of a Thomas Müller cross and volleyed past a helpless Kevin Trapp. The Polish forward may have been marginally offside, but the goal deserved to stand on aesthetic grounds alone.

Müller thought he had increased Bayern's lead just before the break, but his goal was wrongly ruled offside. Arguably the scales had evened out, and the wrong call had no effect on the outcome. Frankfurt remained harmless and Lewandowski did get a second goal for Munich on 66 minutes heading in after a goal-mouth scramble.

And ten minutes from the final whistle, Müller chased down an errant Mario Götze shot and lobbed the ball over the goalline. The 3-0 win means Bayern maintain 10-point advantage over second-placed Wolfsburg. The Bavarians also have momentum going into the Porto clash. And best of all: no Munich players were harmed in the making of the match.

In Saturday's late match, Wolfsburg made short work of struggling Hamburg, winning 2-0. Josuha Guilavogui and Daniel Caligiuri were the goal scorers. Hamburg now sit second-last in the table and could sink to the very bottom depending on the result of Stuttgart's match on Sunday. 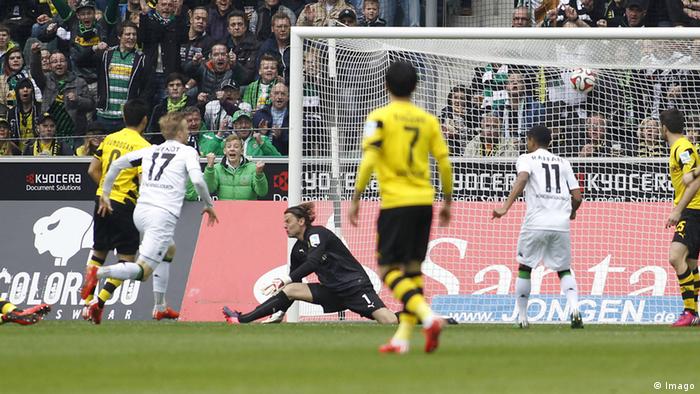 Gladbach roll on as Dortmund crumble

In Mönchengladbach, the hosts went ahead before the opening whistle had even finished echoing around Borussia Park. Biff, bam, boom. Dortmund were unable to deal with a combination in their area, Fabian Johnson drew a save from Roman Weidenfeller, and Oscar Wendt smacked home the rebound.

With the advantage of an early lead, the Foals were able to stymie Dortmund, who had no luck breaking down their opponents' deep-lying defense. And the home side doubled their advantage on the counter-attack just after the half-hour mark. Patrick Herrmann advanced with the ball for nearly the entire length of the pitch, passing off at the last second to Raffael, who slid the ball home.

It was a day to forget for Dortmund, and Havard Nordtveit put the game away with a goal on 67 minutes. The defensive-midfielder was the beneficiary of Dortmund's inability to clear a corner. Ilkay Gündogan got one back for Dortmund, a quarter of an hour from time, but it was still an easy win for Gladbach.

Bayer Leverkusen now have a 10-point lead over Schalke in fourth after they beat Mainz 3-2. Son Heung-Min, Stefan Kiessling and Hakan Calhanoglu were the goalscorers for Leverkusen.

Calhanoglu's goal, a vicious cut free kick, was one for the highlight reels as he returned to the starting eleven after being left out for the German Cup clash with Bayern Munich on Wednesday.

Mainz's club-record signing Ja-Cheol Koo applied a bit of cosmetics to the scoreline with a pair of late penalties. 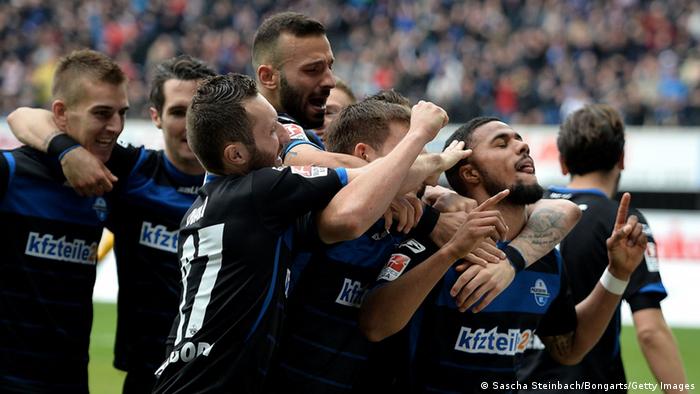 In Paderborn's home match against Augsburg, something very, very unusual happened three minutes after the restart: The hosts scored. It was the Bundesliga minnows' first goal in 599 minutes.

Elias Kachunga headed in from close range. But their lead lasted all of four minutes. Pierre-Emile Höjbjerg, out of loan from Bayern, leveled things with a hard shot.

Paderborn showed spirit, though, and restored their lead on the sixty minute mark. Idir Ouali served up a perfect cross for Srdjan Lakic who headed into the upper corner. And despite squandering a number of chances to salt the win away, coach André Breitenreiter's men held on for the 2-1 victory. It was only their second victory of 2015 but Paderborn are up to third-last and can now feel they have some hope of beating the drop.

Schalke versus Freiburg was a turgid affair for the first hour. Then Benedikt Höwedes enlivened things by conceding a penalty. It was gift spurned by Julian Schuster who scooped the ball over the crossbar from the spot.

The goalless draw leaves Schalke ten points out of fourth place and a Champions League spot. The only ray of sunshine for Royal Blues fans was Julian Draxler. The young attacker returned from a lengthy injured spell to play the final quarter of an hour.

Despite a spirited performance from Hannover in front of their home crowd, late-season bloomers Hertha Berlin were still able to grab a point in the Bundesliga Friday game. Their lone goal came from a stunning strike. (10.04.2015)

Leverkusen's Spahic under investigation for assault

This has not been a good week for Emir Spahic. His team Leverkusen went out against Bayern in the German Cup. And now a criminal complaint has been filed against him for a post-match fracas with security. (10.04.2015)