Reports of swastika graffiti and racial slurs in schools have risen in the US since Donald Trump won Tuesday's election. The national suicide hotline also reportedly saw a 140 percent increase in calls on election night. 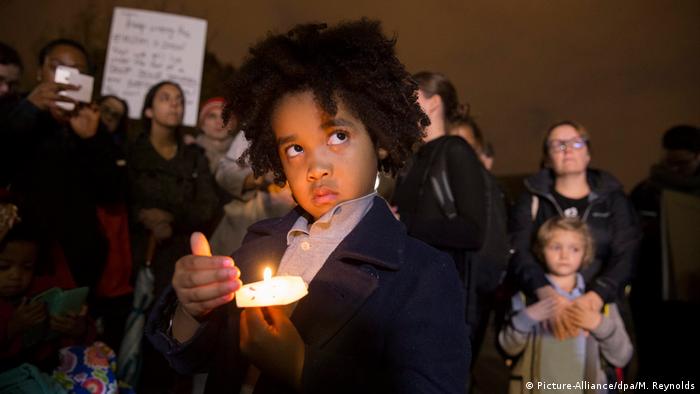 At a coffee shop in Lubbock, Texas on Thursday, a man "verbally assaulted" a family described to be of Middle Eastern descent, a witness at the scene told DW.

The man, who was wearing a "Make America Great Again" hat, told the family of three that Trump was going to build a wall and "kick them out," said Jackson Vaughn, who witnessed the event. The man was reportedly escorted out of the coffee shop by staff members who then spoke with the family.

Others on social media have reported similar encounters in the short amount of time since Tuesday's vote.

On Wednesday morning, swastikas accompanied by the phrase "Sieg Heil 2016" appeared on the glass storefront of a south Philadelphia shop. Philadelphia police are searching for a male subject who they believe spray-painted the swastikas.

The Anti Defamation League, an international US-based Jewish group, has decried the vandalism, which occurred on the 78th anniversary of the anti-Semitic "Night of Broken Glass" pogrom in Germany.

Another large swastika appeared in Wellsville, New York on the side of a softball dugout on Wednesday. The graffiti read: "Make America White Again."

The Wellsville Daily Reporter said the police were investigating, but that no one had yet officially complained.

"We'll take a look at it, we might do a log entry. Unless somebody makes a complaint, we don't have any cause for action," local Police Chief Tim O'Grady was reported as saying.

An alarming number of hate crime reports and stories have come from the nation's middle and high schools.

Preteens formed a human wall at a middle school in DeWitt, Michigan to block Hispanic students from their lockers and classrooms, school officials confirmed. Reportedly white, male students at a separate middle school in Michigan chanted "build the wall" at a cafeteria during lunchtime.

As early as the election night, a worrisome trend arose in the number of people seeking mental health support. The US National Suicide Prevention Lifeline noted a 30 percent rise in calls the night before the election as people became anxious about the results of the vote.

Dr. John Draper with the suicide help line said that on the night of the election, "as the evening wore on, into the overnight, we saw actually a doubling of calls ... about a 140-per cent increase."

The only time a similar call volume was noted by the center occurred when actor Robin Williams committed suicide in 2014.

"This has been a tough election cycle for many people. It's well documented," he said."There's been a lot of fear and anxiety on both sides of the aisle," Draper said.

The startling accounts of hate speech-vandalism and verbal attacks against LGBTQ people, Muslims, Hispanics, Asians and African-Americans come at a time when many wonder what Trumps presidency will mean for minorities. During his campaign, he pledged to deport millions of undocumented Mexican immigrants as well as impose a travel ban on Muslims.

Although Trump sought a conciliatory tone during his acceptance speech by promising to serve all Americans, critics have often expressed concern that his inflammatory campaign rhetoric could encourage intolerance and even violence.

President Obama spent more than an hour talking with his successor, Donald Trump, starting what Obama has vowed will be a "smooth" transition of power. Trump said he's looking forward to more meetings with the president. (10.11.2016)

Across the US, demonstrators have rallied behind the slogan "Not my president." Angered by the president-elect's discriminatory remarks, protesters warned of the rise of "white nationalism." (10.11.2016)

Trump has made no secret of the fact that he does not believe in climate change, and that global warming is a hoax. Read what environmentalists and climate fighters are saying about his election victory. (09.11.2016)

My picture of the week | Americans who feel left behind

US Justice Department releases affidavit that led to Trump search 26.08.2022

The largely blacked out 32-page document pointed to classified records that former US President Donald Trump kept at his Florida residence.