Whether leftover noodles or "expired" yogurt, the EU says too much usable food ends up in trash cans in Europe. Brussels is now out to reduce food waste by 50 percent by 2025 with its FUSIONS program. 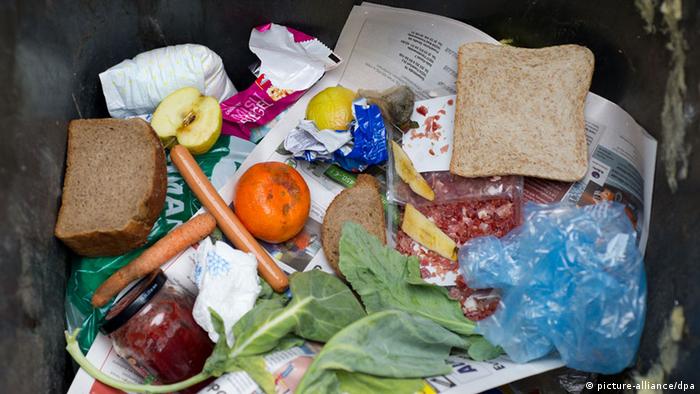 Roughly 89 million tons of food are wasted every year in the European Union. A particularly large amount of foodstuffs are tossed out in private households and in businesses, whether from expired groceries or a surplus of cooked food. Sometimes the food just hasn't been stored well.

Food waste is an issue that the EU is working to change step-by-step in the "value-added chain."

"It starts on the field. When you have cucumbers that are crooked or carrots that are too small, or that deviate in color too much, they'll be disposed of," said Selina Juul, founder of the Danish "Stop Wasting Food" movement. "During the packaging process another 20 percent of foodstuffs are lost."

By dealing with nourishment personally, Juul believes that consumers can both save money and contribute to global nutritional security. "The truth is, we can't take our leftovers and transport them to Africa. That's just not possible. But theoretically, you can say that the more food we waste, the higher we drive worldwide foodstuff prices."

The right kind of food fight 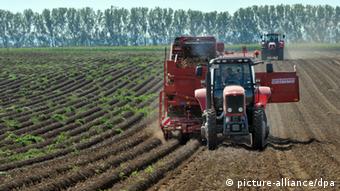 German potatoes, here in the state of Thüringen near Berlin

The EU now intends to counteract food waste aggressively. By 2025 it hopes to reduce food waste in Europe by 50 percent.

To do so it has funded a project called FUSIONS (Food Use Social Innovations by Optimising Waste Strategies). Also participating is the UN's Food and Agriculture Organization, NGOs, European businesses and 20 European universities; in Germany, the University of Hohenheim is taking part.

"We know that 25 to 30 percent of products made for consumption end up getting lost at some point in the supply chain," said project coordinator Toine Timmermans from the Univerity of Wageningen in the Netherlands.

FUSIONS hopes to make consumers more sensitive to these issues and to provide reliable, quantifiable data to politicians and businesses. At this point such information does not exist.

"We'd like to exchange 'Best-Practice-Plans' and run implementation studies, since there are so many different activities and supply chains in such a wide variety of sectors," said Toine Timmermans in an interview with DW.

One good idea came from the Scandinavian supermarket chain REMA 1000. "Instead of just throwing them away, foodstuffs about to expire are sold at a side table - at a 70 percent discount," said Selina Juul, founder of Stop Wasting Food. Both sides stand to profit: Consumers pay less, and the chain generates revenues via additional sales.

Everyone can do something 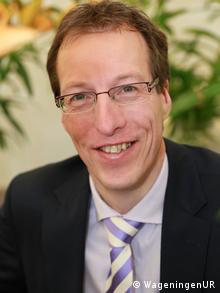 The Dutch Toine Timmermans is head of FUSIONS project

Toine Timmerman also sees an obligation on the part of politicians who can "force improvements upon the supply chain."

But at Christmas, a time when the largest proportion of edible foods goes to waste, individuals also can play a part. "People who are at a home should take a look and see if they can try out recipes first before they cook those meals for 10 or 20 guests," Timmerman said. They can also reduce waste by better planning their shopping trips or by filling their plates a bit more modestly.

Selina Juul recommends that leftovers be given to guests on their way out the door or eaten the day after Christmas. Juul, herself, sets a good example. This year, just as she's been doing for many years now, she'll be picking up extra food from shops and restaurants and delivering it to Copenhagen homeless shelters.

Every German throws away over 80 kilograms of food on average per year, according to a study presented in Berlin on Tuesday. Germany's agriculture minister wants that amount reduced by half by 2025. (13.03.2012)