The second day of a global conference on Afghanistan is set to focus on fundraising efforts to promote peace, state-building and development. Leaders are seeking to maintain annual financial commitments to the country. 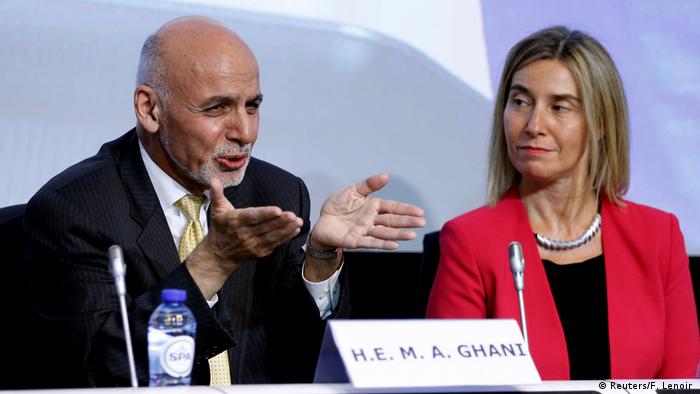 On Wednesday, the European Union announced a pledge of 1.2 billion euros ($1.34 billion) to Afghanistan for development and reconstruction projects.

"I would expect similar levels of engagement from our partners," said the EU's foreign policy chief, Federica Mogherini, in reference to other participants in a two-day conference on Afghanistan in Brussels.

Dozens of other countries - including the US, Russia, China and India - are also expected to renew their aid commitment to Afghanistan, which is not able to fully support itself after four decades of conflict, and amid a resurgence of the Taliban.

In total, funding to the tune of $4 billion per year is being sought for the next four years.

Representatives from 70 countries and 20 organizations are in attendance at the meeting in Brussels, which is being hosted by the European Union.

Despite billions of dollars pledged to Afghanistan by international partners over the last 15 years, corruption, threats to national security from the Taliban, and lagging development projects continue to plague the country. The slow progress notwithstanding, Mogherini said there was no "donor's fatigue" regarding Afghanistan and added that political support was important as well.

The EU said on Monday it had struck a tentative deal with Kabul over taking back migrants whose asylum applications had been rejected. This deal has been criticized as a prerequisite for receiving aid from the EU, but Mogherini repeated the EU's stance that this was not the case.

"There is never, never a link between our development aid and whatever we do on migration," she told reporters Wednesday.

EU officials say that under the deal, unaccompanied minors can be returned only if their families have been identified and their well-being is assured. They said single women and old or sick people would have their cases examined individually.

The EU is legally obliged under international treaties to give shelter to people fleeing from war and persecution, but can reject those deemed "economic migrants" and return them to their homes if their country of origin is considered safe.

According to a leaked confidential EU paper from March, there are possible plans to return some 80,000 Afghans currently seeking asylum in the European Union to their home country.

Rights groups have slammed EU plans for returning Afghan migrants to their home country. This comes as international talks on support for Afghanistan are to be held in Brussels. (04.10.2016)