Brown had head down when Ferguson officer killed him

A lawyer for the family of Michael Brown says the unarmed black teenager was shot six times by the white police officer who killed him. The shooting has set off over a week of protests in Ferguson, Missouri. 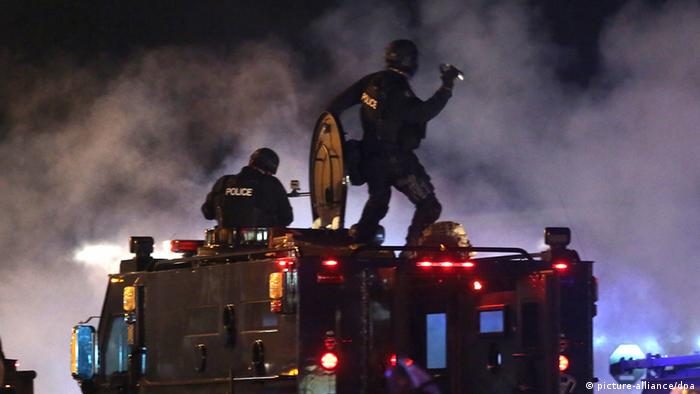 The autopsy indicated that Brown may have lowered his head when the fatal shot hit him. Federal and local officials have yet to release their own reports.

At a news conference Monday, family lawyer Daryl Parks said the results made a clear case against the police officer who killed the unarmed 18-year-old, showing that one bullet hit Brown in the "very top of his head" and that another exited near his eye. "His head was in a downward position," Parks added. "Given those kind of facts, this officer should have been arrested."

The department's reluctance to release details of the shooting have brought thousands of protesters to the streets of the St. Louis suburb, where black people make up about three-fifths of the population of 21,000. The Brown family has called for peaceful demonstrations and an end to violence, and the police forces on the ground have drawn widespread criticism for using excessive force on protesters.

Instead of arresting Officer Darren Wilson, police placed him on paid administrative leave after he killed Brown on August 9. In a televised interview Monday, Brown's mother, Lesley McSpadden, said that police could restore peace "with justice," by "arresting this man and making him accountable for his action."

The St. Louis County Police did not respond to a query about why no one had arrested the officer. The county has run a parallel investigation to one by the US Department of Justice, which launched an inquiry into possible civil rights violations in the shooting.

Missouri's governor deployed the National Guard to try to restore calm. Jay Nixon also declared a state of emergency on Saturday and set a curfew from midnight until 5 a.m. local time (0500-1000 UTC).

The UN urged military and police not to use violence against unarmed protesters. "The secretary-general calls on the authorities to ensure that the rights to peaceful assembly and freedom of expression are protected," Ban Ki-moon's spokesman told reporters on Monday. "He calls on all to exercise restraint, for law enforcement officials to abide by US and international standards in dealing with demonstrators."