Israel's army is conducting a major military campaign in the occupied West Bank to look for three missing Israeli youths. Tensions between Israelis and Palestinians, who have seen casualties, are escalating as a result. 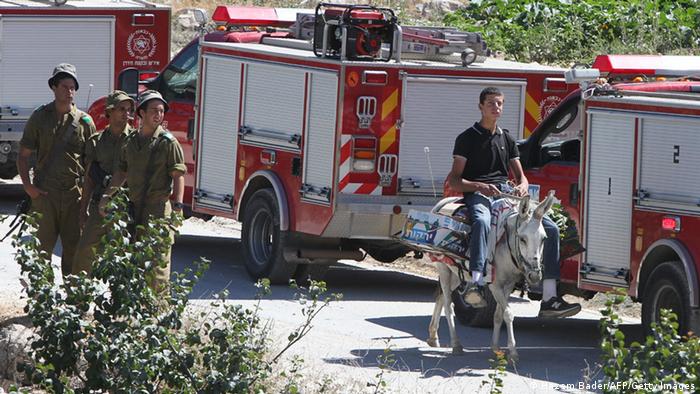 Hesitantly, a bit of normality is returning to the usually bustling city of Hebron in the Israeli-occupied West Bank. World Cup flags wave on several street corners, and most businesses are open again. Diaa, a young fruit vendor, has set up his stand on the edge of the street. He's selling peaches and figs from his garden.

"I really hope that this is over soon. It's completely blocked my work," the young man says.

However, he also knows how tense the situation is. Nearby, Palestinian police officers are conducting traffic, at least during the day. When darkness falls, the Israeli army pushes further into autonomous Palestinian territory to search for three missing teenagers.

For over a week, Israel's soldiers have been combing the occupied West Bank meter by meter. Three yeshiva students, Gilad Shaer, Naftali Frankel and Eyal Yifrach, got into a car as hitchhikers just a few kilometers away near the Israeli settlement Gush Etzion. One of them was able to make a call to the police for help. Since then, however, there have been no signs of life from the three.

The city of Hebron is the primary site of the military sweep. Curfews, house-by-house searches and arrests have become the stuff of daily life for the Palestinian population here in recent days. 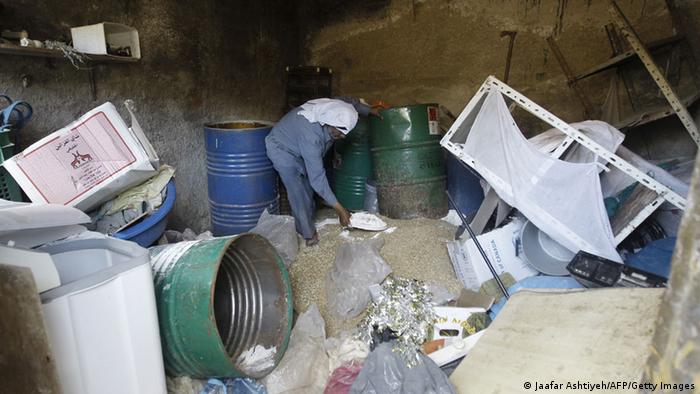 One home after an aggressive search by Israeli authorities

"They just busted through the door and even ruined the kitchen," says Tasnim, a young Palestinian woman.

Photos on her cell phone show the contents of a refrigerator strewn on the ground, such as mashed tomatoes and a broken watermelon. Her brother was arrested during a nightly raid and has since been in jail. Some members of the large family are said to have ties to Hamas. But the family doesn't believe that Hamas had anything to do with the kidnappings. No organization has come forward to claim responsibility for them.

Israel's government says the blame lies with Hamas, though. Prime Minister Benjamin Netanyahu plans to unveil concrete evidence to that effect in the coming days.

"We have proof that it's Hamas. We're currently exchanging this information with other countries, and we will soon publish the proof," the prime minister said on Sunday (22.06.2014). The Israeli army reports that through the weekend, 1,350 West Bank homes had been searched and 340 Palestinians arrested - 250 of them allegedly having close ties to Hamas.

It's no secret that the military action also serves to weaken and discredit Hamas. Particularly under target is the organization's social and charity infrastructure in the West Bank.

But the longer the military campaign under the code name "Brother's Keeper" continues, the greater the tensions will grow between Israelis and Palestinians. While Palestinians seemed in the first days to be quietly waiting to see what would happen, skirmishes are now on the rise. Young Palestinians, in particular, are harassing the army units - by throwing stones at them, for instance. 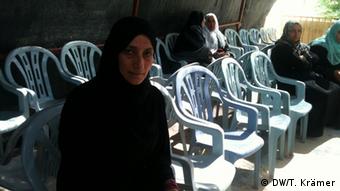 Aida Dudin is mourning her son, who was shot dead on Friday

In the town of Dura southwest of Hebron, a mourning tent has stood in front of the Dudin family's home since Friday. Their 15-year-old son, Mohammed, was shot dead that morning by Israeli soldiers. Neighbors come to drink unsweetened coffee as a show of sympathy with the family.

"I made sure to lock the door so that he couldn't get out," said mother Aida, dressed entirely in black. "But I guess he climbed out of the window on the second floor."

Due to the situation, she had forbidden her son from going out into the street after dark. Eyewitnesses report that he and other youths hurled stones at Israeli soldiers when they came into town in the early hours of the morning. They say the soldiers issued fire in response. Her son was among those struck, the mother relates quietly as she looks at a picture of him.

The family is bearing their fate with composure. But murmurs of criticism can be heard that so little support is coming from Palestinians' own ranks. Particularly controversial is a cooperation on security matters between the Palestinian Authority and Israeli armed forces. Palestinian President Mahmoud Abbas made a clear statement condemning the kidnapping of the three young Israelis. Simultaneously, he instructed his security forces to help with the search for the missing students, which brought him heavy criticism from Hamas.

In Hebron, the center of which is partially under the Palestinian Authority's governance, the governor gets daily reminders of how that limited degree of autonomy is being trampled by Israeli armed forces.

"This campaign isn't just in the service of finding the kidnapped boys. Instead, it's also about weakening Hamas and ending the reconciliation," said governor Kamel Hmaid.

The raids, he says, only lead residents to grow frustrated with Palestinian leaders, explaining, "They're making us look like collaborators." 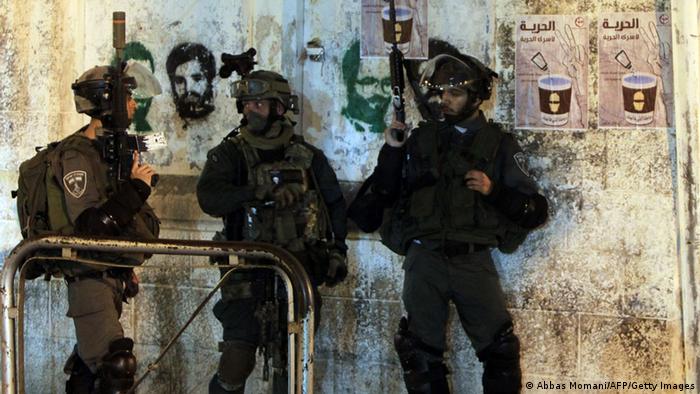 But the Palestinian president has many other concerns now. In light of the escalating violence, he has sounded caution on unforeseeable outcomes.

"I've said that the kidnapping was a crime," Abbas said to journalists with the Israeli daily "Haaretz," continuing, "But does that justify the cold-blooded killing of Palestinian youths? What does Netanyahu have to say about that?"

On Sunday morning, another young Palestinian died in an unclear situation after an army raid in Ramallah. It was one of the biggest raids in the West Bank city in years. Here, too, young Palestinians threw rocks at Israeli army vehicles. After the army left the city, they redirected their anger at Palestinian officials, hurling stones at a police station in central Ramallah.

While Israel continues its outpouring of concern over the three missing young men, the kidnapping has become a significant political crisis that could escalate at any time.

There is still no trace of three young seminary students Israel claims were kidnapped by Hamas. It's a quandary for Palestinian President Abbas, says Rene Wildangel of Germany's Heinrich Böll Foundation. (18.06.2014)