Britain's National Police Chiefs Council has reported more than 6,000 hate crime incidents across the United Kingdom since the EU referendum in late June. Most of the cases have involved violence. 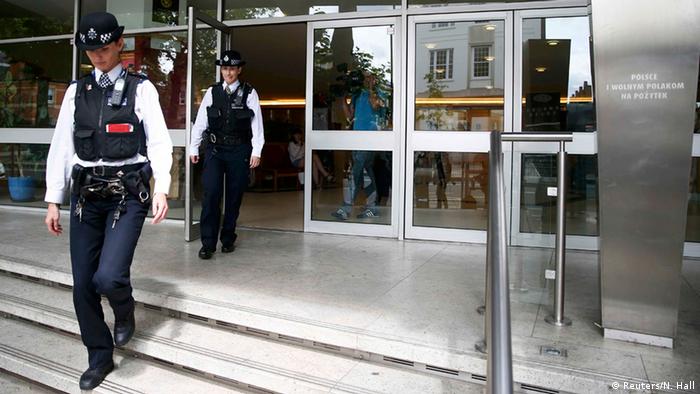 The National Police Chiefs Council (NPCC) said it had recorded 6,193 incidents of hate crime from mid-June to mid-July, in figures obtained from police forces in England, Wales and Northern Ireland.

The most commonly reported crimes were harassment, assault and other violence such as verbal abuse or spitting. The second and third most prevalent incidents were public order offences, followed by criminal damage.

Since the EU referendum result was declared on June 24, Muslims and Eastern Europeans have said they have been particularly targeted.

"Clearly any hate crime is unacceptable and these numbers are still far too high," said Mark Hamilton, the NPCC's assistant chief constable, in a statement issued Friday.

Hamilton noted the figure for the second half of the month-long period (July 1 to 14) had slightly decreased from the number of incidents reported in the first fortnight (June 16 to 30). But overall it represented a 20 percent increase over the equivalent period in 2015.

What Brexit means for Jews and Israelis in the UK

Following Britain's vote to leave the EU there has been a sharp rise in hate crimes in the UK. A series of racist incidents was directed mainly against Poles, but now Jews are worried that the attacks could hit them too. (02.07.2016)

When migrants turn against migrants

"Eastern Europeans are taking our jobs!" In the wake of the Brexit referendum, this is the attitude of certain UK citizens who themselves once were migrants. As DW's Jaafar Abdul-Karim found out. (06.07.2016)

In the wake of last week's Brexit vote, there's been a sharp increase in hate crimes targeting European nationals in the UK. Experts warn of deep divisions opened up by the vote, as Samira Shackle reports from London. (28.06.2016)

"Following increases in hate crime seen after the EU referendum, police forces have been taking a robust approach to these crimes and we are pleased to see the numbers of incidents have begun to fall," he said.

The campaign to leave the European Union, or Brexit, which gained a majority of 51.9 percent in the June 23 referendum, has denied that its focus on immigration helped increase xenophobia and racism.

A week before the vote, opposition lawmaker Jo Cox was shot and stabbed to death in northern England. She had worked for the international aid agency Oxfam and campaigned on issues related to the Syrian civil war. A man is standing trial for her murder under terrorism protocols.

In early July, the NPCC said there were 289 alleged offences across England, Wales and Northern Ireland on the single day of June 25 - equivalent to 12 offences every hour.

Brexit 'unleashed something in people'

Earlier this week, London police deputy commissioner Craig Mackey said the Brexit vote seemed to have "unleashed something in people," with the result being that people felt able to do "things that, let's be really clear, are illegal." He was commenting on the arrests of 400 people in London for suspected hate crimes since the Brexit vote.

Mackey said the reported offenses were mainly verbal abuse, harassment and criminal damage. However, he said serious assaults had also been reported. "We will take action where they do it and when those incidents occur," Mackey said.

The NPCC's Hamilton said police forces were committed to helping people feel safe and secure as they go with their lives. "Police officers will continue to be out around the country engaging with communities and picking up and dealing with tensions and problems," he said.

Also Friday, data from UK business researchers IHS Markit for their Purchasing Managers Index, or PMI, showed a fall to 47.7 in July, its lowest level since April 2009. Any result below 50 indicates contraction.

The survey of 650 service companies showed manufacturing and service sectors reporting a decline in output and orders. There was a slight uptick reported for exports, driven by the weaker UK currency since the Brexit vote.