The man responsible for heading up the UK's flood response has returned from a Caribbean vacation facing criticism. Britain has been hit by flooding as a third major storm pounds the Isles. 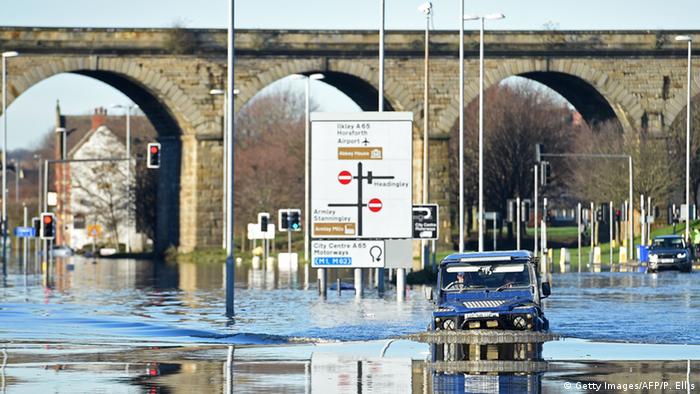 Storm Frank barreled through northern England, Scotland and Northern Ireland on Wednesday, cutting power and flooding streets in the latest weather event to batter the UK.

Authorities maintained severe flood alerts - meaning there is a threat to life - as heavy rain drenched towns and villages and water from hills and mountains is expected to flood into rivers already bursting their banks.

"The weather remains hugely challenging, with more rain threatening to cause further flooding in Cumbria and Yorkshire today and into New Year's Eve," said Craig Woolhouse at the Environment Agency.

The latest bout of rain follows two other storms that brought torrential rain and destructive winds across the UK this month. Consultancy PwC on Wednesday said the three storms combined could cost more than 4.1 billion euros ($4.5 billion).

The government's response to the winter holiday storms has come under criticism, and even Prime Minister David Cameron has admitted some 2.4 billion euros ($2.6 billion) spent in recent years on flood protection has not been a complete success.

Pressure on the government mounted further on Wednesday as the head of the Environment Agency, Philip Dilley, finally returned from a Christmas holiday vacation in Barbados.

Dilley, a former business adviser to Cameron, told reporters upon landing in London with a Caribbean tan that he had arrived "at the appropriate time," even as thousands of people had been forced out of their homes for the holidays.

"Everybody can't be everywhere at the same time," he said when asked if Barbados was the right place from where to manage the floods. "I am lucky enough to have two homes, so I travel between the two," he added.

British newspapers on Wednesday showed photographs of what is said to be Dilley's gated mansion in Barbados, complete with a swimming pool and gardens.

The Environment Agency has come under heat for misleading the public in a statement last week that said Dilley was "at home with his family."

On Wednesday, the agency showed pictures of Dilley out in the field speaking with emergency responders and those impacted by the floods.