Shares in the automaker, whose cars are famously driven by fictional British spy James Bond, fell more than 6 percent. Aston Martin is the first originally-British automaker to sell shares in years. 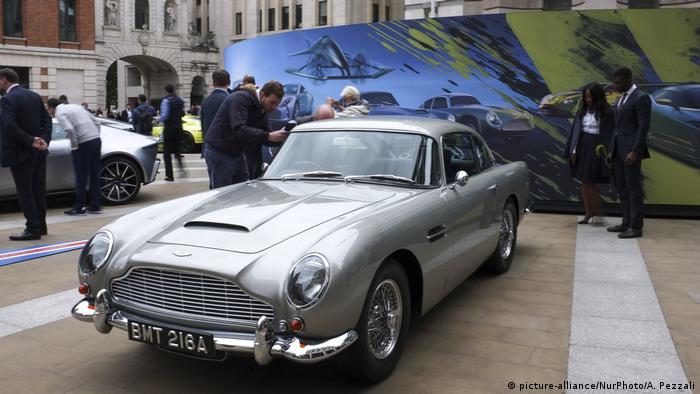 Aston Martin failed to impress investors on its market debut in London on Wednesday with shares in the carmaker falling as much as 6.5 percent.

The sports car specialists, whose cars have played a starring role in James Bond movies, had priced shares at 19 pounds each, giving it a market capitalization of 4.33 billion pounds ($5.63 billion, €4.88 billion).

The shares in the company opened flat before sliding lower as investors and analysts raised concerns over its ability to deliver on its plans to launch a new model every year from 2016 to 2022.

"[It] has very aggressive growth plans. The execution of that growth needs to be flawless — nothing eats cash more than a car company when the cycle turns. There is concern that it's more cyclical than the commentary has been," said James Congdon, managing director of cashflow returns specialist Quest.

"The banks have done a good job for their client – but there's no bounce."

Aston Martin has had a checkered past having declared itself bankrupt seven times in its 105 history.

The carmaker made a turnaround under Chief Executive Andy Palmer and last year posted its first profit in nearly a decade.

The automaker is becoming the only one to be listed on the London Stock Exchange, and is the first nominally British carmaker to sell shares in years. Like other British brands such as Jaguar, Bentley and Rolls Royce, Aston Martin was sold to a foreign car giant, Ford, in the 1990s. Ford cut it loose in 2006 and the company has since changed hands several times.

Aston Martin current shareholders, which include Italian investment firm Investindustrial and a group of Kuwait-based investors, sold a quarter of the company's stock in the share sale. The IPO raised no money for Aston Martin itself.

Daimler, the maker of Mercedes Benz cars, is not selling its nearly 5 percent stake in the company. Mercedes-AMG, the German company's high-performance wing, supplies engines and other key components to Aston Martin.

Aston Martin is recreating a limited run of the 007 legendary DB5 cars. The vehicle will have the rotating license plates featured in movies including "Goldfinger," but there's no word on smoke screens or oil slicks. (20.08.2018)

Car manufacturing in Britain has declined for yet another month, with production for the home market taking a severe blow. Export numbers remained relatively stable, though, the SMMT industry body said. (27.09.2018)