As forces loyal to Libyan ruler Moammar Gadhafi edged closer to the opposition stronghold of Benghazi, debate was ongoing at the United Nations over a no-fly zone over the country. 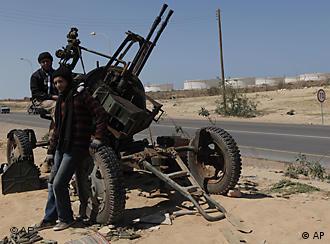 Efforts by Britain, France and the Arab League, acting through Lebanon, to impose a no-fly zone have met with stiff resistance at the United Nations as Moammar Gadhafi's forces pushed eastwards toward the Libyan rebel stronghold of Benghazi late Tuesday.

A draft resolution that diplomats said would ban "all flights" in Libyan airspace and allow "all necessary measures to enforce compliance" was distributed. China and Russia were believed to have been behind the opposition movement, while Germany, India and the United States were said to have doubts about the plan.

Foreign ministers from the Group of Eight (G8) economies had earlier sidestepped the prospect of a no-fly zone to buttress the anti-Gadhafi forces.

In a final communique, the ministers made no mention of plans for a no-fly zone, agreeing instead that the UN Security Council should put more pressure on the Gadhafi regime "including through economic sanctions." 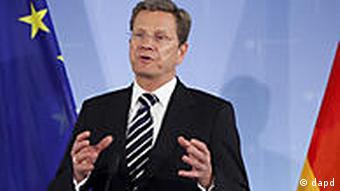 Germany is reluctant to back military action

The proposed no-fly zone would ground Libyan aircraft to protect its people from assault by forces loyal to Gadhafi. France had even talked of targeted air strikes.

French Foreign Minister Alain Juppe said foreign ministers from the G8 countries agreed that the UN Security Council was the place to pressure the Gadhafi regime, and that Arab nations should be on board.

He said that such pressure could include "reinforcing sanctions, decreeing a maritime embargo and foreseeing a no-fly zone - even if that's not a panacea."

Italian Foreign Minister Franco Frattini told reporters that along with Germany, Russia had argued that a no-fly zone would not be effective and could be counterproductive.

Germany's hands-off approach clearly pleased Gadhafi, who praised its stance in an interview on Tuesday with German television station RTL.

"Germans have taken a good stance on our situation, unlike many other Western countries," Gadhafi told RTL, adding "forget the West." He said that in the future, only Russia, India and China would get Libyan oil or other Libyan business.

But because of its opposition to the no-fly zone, Germany could also possibly get oil, he said, adding: "Germany … not France … deserves a permanent seat on the UN Security Council." 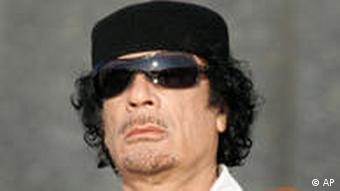 During the interview, Gadhafi denied that demonstrations had been taking place in Libya, calling the recent upheaval around the country a "minor incident."

At one point, Gadhafi asked reporter Antonia Rados what he had done to "disappoint" the EU and US, to earn such harsh criticism from them. When the reporter replied by mentioning deadly attacks on peaceful demonstrators, Gadhafi said: "Those are lies."

"He's my friend, but I think he has gone nuts," Gadhafi told RTL. "He is sick. That's what the people who work with him say - that he has a mental illness."

Meanwhile, Al Jazeera television reported that on the ground in Libya, government forces were continuing their advance toward rebel-held positions.

Forces loyal to Gadhafi launched a number of air strikes on Tuesday on the eastern Libyan town of Ajdabiyah, according to Al Jazeera. At least one person was reported killed and several wounded.

Ajdabiyah was also subject to air strikes on Monday, the latest town to be targeted as government forces advanced eastwards toward the rebel-held stronghold of Benghazi.

Opinion: Stalling on Libya no-fly zone is tough, but necessary

The international community's reluctance to create a no-fly zone over Libya is a bitter, but necessary, pill for those on the ground, says DW's Daniel Scheschkewitz. (15.03.2011)

The International Committee of the Red Cross is appealing for access to all areas of the conflict in Libya and calling on both sides not to target civilians. (10.03.2011)

On the day Libyans were scheduled to go to polls, Western nations have called on Libya to set a new date and finalize a list of candidates.

At least 40 African countries print their money in the UK, France and Germany — decades after independence, raising questions about self-sufficiency. DW examines what prompts them to outsource their currency production.